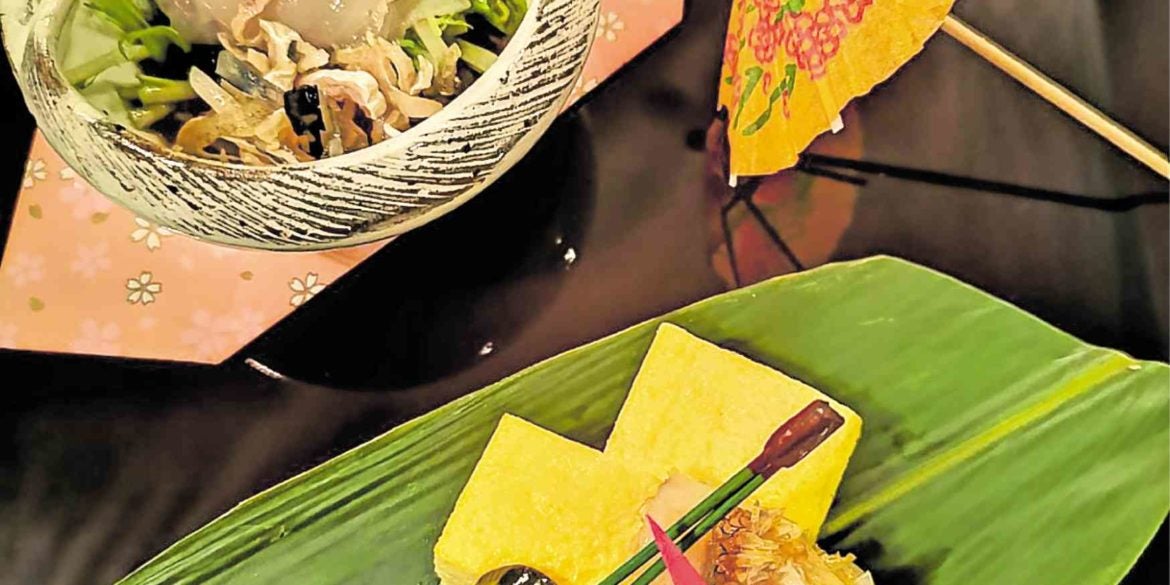 For starters, fugu or poison fish—chefs train rigorously for three years to prepare this delicacy that contains toxins more potent than cyanide or arsenic

The residence of Japan’s envoy to the Philippines is undisputedly the best place for Japanese food in this country. Invitations to intimate dinners hosted by Ambassador Koji Haneda and his amiable wife, Ihoko, have been enjoyable experiences of premium cuisine and fine company.

It is a prerequisite for Japanese ambassadors posted abroad to bring a Japanese chef as part of the diplomatic design to raise the international profile of Japanese food culture.

The adherence to offering washoku—traditional food of Japan—sits squarely on the skills of chef Daisuke Suzuki. I met him with the Hanedas when they had newly arrived in the Philippines.

When chef Nobu Matsuhisa visited his namesake restaurant at the City of Dreams for a one-night food event, the Hanedas were guests, along with Suzuki-san.

The international celebrity chef and restaurateur Matsuhisa shared some cooking techniques with Suzuki-san, who immediately applied it in his kitchen with adjustments and innovations. Not long after, the result of his efforts was evident in a dinner at the official residence. It was the touch of a master.

Many dinners later, the Hanedas spread the table for yet another get-together. Haneda-san proudly announced that Suzuki-san received the 2019 FM Commendation for Excellent Executive Chef. He was among those recognized by the Japanese foreign minister with an award certificate and a furoshiki, a commemorative gift, for his exceptional skills and contribution.

Washoku considers what nature offers and following the ingredients of the season, he conjured a kaiseki or course meal that maximized natural flavors.

The character wa in the kanji character translates to “harmony,” which is an important Japanese value.

Shoku, the second character, is interchangeably “food” and “to eat.” Balance is plated in a pleasing presentation to create a multiple sensory experience.

The ambassador poured the legendary Koshi No Kanbai into sake cups as the dinner began. The craft sake, he explained, was brewed in the wintry Niigata, acknowledged as the most renowned region for producing the rice wine. It was light and dry, an experience of what has been referred to as the phantom finish, a smooth vanishing point on the palate.

Refined and demure, the sake was enjoyable on its own; with the first course, it was a most suitable companion that heightened flavors of the exotic Torafugu Puffer Fish with Ponzu Vinegar.

Chefs in Japan train rigorously for three years to prepare this most prestigious seafood that contains toxins more potent than cyanide or arsenic. The tetrodotoxin in one puffer fish can kill 30 adults, yet the Japanese consume 10,000 tons of fugu annually.

Chefs take tests after an apprenticeship before they are given the license to prepare the torafugu and approximately 35 percent make the grade.

Suzuki-san served the puffer fish raw, a sashimi of subtle taste released with slow mastication. It was the opener under the heading of Zensai on the menu, one of several appetizers that included Rolled Omelet à la Japan, Seared Red Sea Bream and Nama-Fu Gluten Cake with Miso Paste.

Other than the quips about who would taste the fugu first, the first course was consumed in quiet appreciation.

The Wanmono course was a clever guava-based sour soup with lobster. Sinigang sa Bayabas à la Japan came in the lacquered lidded bowl that released an aromatic fragrance when uncovered.

Our host related how one chef once had to rush out and get fresh guavas to recreate the broth that had accidentally tipped over a few hours before the dinner. “He is able to find all the ingredients he needs for his cooking even on short notice,” the ambassador said.

For the Saga-Beef Sukiyaki, the culinary sorcerer used the impressive meat of Saga prefecture, which he prepared with soy sauce and sugar sauce.

Thoughtful portions served with sufficient time to digest and appreciate allowed for a savoring of artistry and tastes, as well as lighthearted conversation around the table.

Embassy staff poured 2014 Dunn Vineyard Cabernet Sauvignon and 2016 Puligny-Montrachet as complements to the food throughout the dinner.

Sashimi is a staple of any kaiseki, and the Otsukuri course included angel shrimp, striped jack and the buttery underbelly of the bluefin tuna or toro. It was an excellent preamble to the memorable Omi-Beef Fillet Steak that came with a corn tempura siding.

Omi beef, raised in the Shiga prefecture, is one of the three top Wagyu meats from Japan’s domestic cattle. It has the oldest history, counting 400 years, as far back as the Azuchi-Momoyama period.

The seared meat with a bright, pinkish center was taken slowly, like a solemn ritual of bites and chew. There was salt on the ceramic plate beside the meat cuts, but it was good on its own. The corn tempura added a delectable dimension, providing a different texture in the mouth.

The Ippin course had breached a level of satisfaction so that when the Eel and Mushroom Steamed Seasoned Rice arrived, only a token tasting could be accommodated.

It was necessary to exercise some restraint to allow a  sampling of the celebrated muskmelon, served as dessert with the Chocolate Yökan.

The muskmelon, widely regarded as a fruit, is a monoecious herb. It is highly prized and the cultivated domesticated variety is considered a premium gift.

Sliced pieces were served on the rind, bite-sizes of yellow packed with vitamins A, C and beta carotene. It was a refreshing finish to another memorable meal.

The ambassador invited the chef to meet the guests, who all congratulated him and expressed genuine appreciation for the outstanding food he had prepared.

Japanese dining is an art form extended that evening with gracious hospitality. There are few pleasures in life any better than that.