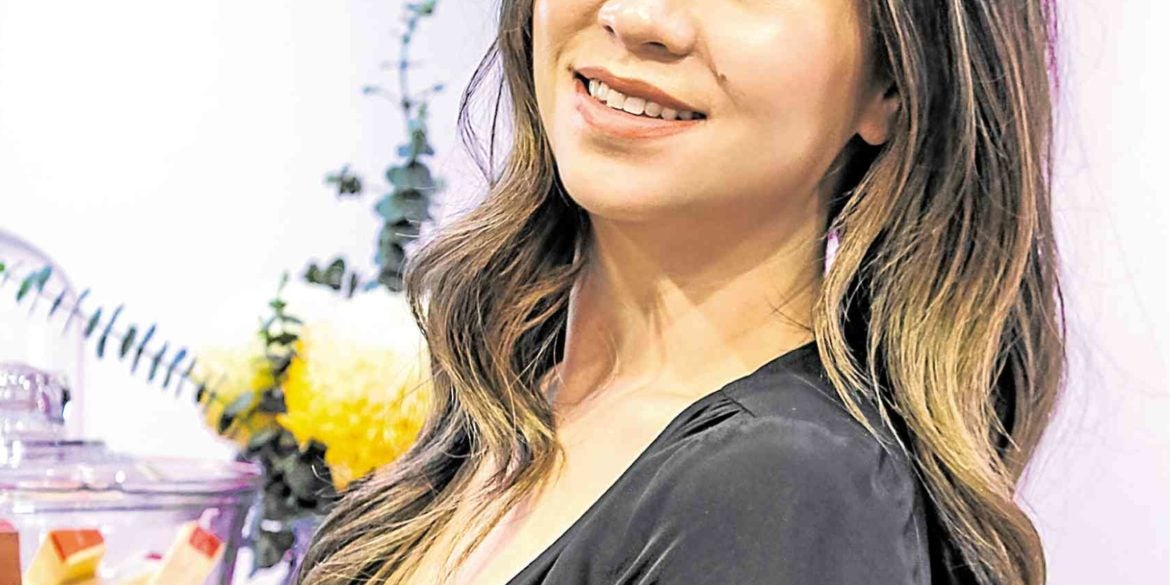 “When you think about a dumpling, it’s luminous, it’s plump, it’s delicious… like, who doesn’twant to be a dumpling?” Vo says.

Bench really aligns with my aesthetic. Everything is very fresh and timeless and healthy and beautiful. That’s how I see beauty as well, so I thought it was a nice match. And I’ve always wanted to go to Manila and here I am,” said Nam Vo.

It was Wednesday afternoon and the New York-based makeup artist was on the third floor of the Bench flagship store in BGC, a couple of hours before the Bench Beauty event.

“I only got in yesterday but everyone’s been so warm and welcoming and I’m actually surprised how strong of a following I have here. There’s some dumplings here in Manila.”

Oh, yes, dumplings. Dewy dumplings to be precise. “Some of the best things come out organically. For years I’ve called everyone dumpling. I called my boyfriend dumpling for years, he hated it. Look what I have now.”

#DewyDumplings was born on the set of one of Vo’s shoots, when she used it as a hashtag to describe the gorgeous glowy look you achieve with a highlighter. “When you think about a dumpling, it’s luminous, it’s plump, it’s delicious… like, who doesn’t want to be a dumpling?”

What started as a hashtag has spawned a dewy cult all over the world.

Vo said she had been into makeup all her life. “Some things are very innate in children. I was just always fascinated by beauty and products and hair and dolls and like everything very feminine and girly. I think that it’s just part of my DNA.”

Born to Vietnamese immigrant parents in California, Vo first honed her makeup skills working at the makeup counters of Shiseido, Nars and MAC at a San Francisco mall.

In search of success, she moved to New York and ended up working as a makeup artist  for the dancers at a couple of strip clubs while also doing bridal makeup.

Vo said, “You know, when you work with brides, it’s the day they’re spending the most money, the day that they’re supposed to be the most beautiful. That in itself taught me a lot. It’s one thing to be a good makeup artist but you have to also know how to read energy and work with people.

“You can be an incredible makeup artist but if you can’t make a bride or a stripper feel beautiful or comfortable, then it kind of defeats the whole purpose. I think that brides and strippers are the pickiest people on earth, so it was kind of a good training ground for me to work with that type of clientele.”

With strippers there’s a no-glitter rule, Vo said. “Because glitter gets on the husbands.”

But Vo’s strip club days are over. One editorial shoot for Elle Vietnam turned into another and another, and with Vo harnessing the power of social media—Instagram, in particular—she has become a darling of beauty editors with so many makeup brands clamoring to work with her.

Her #DewyDumplings include Kylie Jenner, Chrissy Teigen and Aimee Song.

Vo grew up in a family where there was pressure to choose more conventional careers like being a doctor or an engineer. Now how do they feel about her success?

“They’re shocked. When I was little, my family always told me that I was pretty, I’ll probably just marry rich because I’m an airhead… But now, look who’s buying the biggest Christmas presents in the family?” she said.

But Vo’s gift to the world is #DewyDumplings.

To achieve the #DewyDumpling look, skincare is a must. “I tell people that beautiful makeup starts with beautiful skin. You have to take care of your skin. You have to know what to highlight, what to conceal… Invest in skincare because the better your skin, the less makeup and the less coverage you’re gonna have to work with.”

Although Bench Beauty has existed for years, the entire line got a makeover a couple of months ago. “We have products that have been around for 12 years. It was time for a relaunch,” said Ben Chan, chair of Suyen Corp. and founder and executive creative director of Bench.

Vo said, “From packaging to texture to color tones, I think that they really had the Asian woman in mind. All these colors are universally flattering to warmer skin tones. They really took the time to care about texture and all of that. It’s really beautiful and affordable.”

Products are priced between P69 and P599.

Bench Beauty’s first freestanding store is in TriNoma. The products are also already available in some Bench stores, on the Bench website and on sites like Zalora, Lazada and BeautyMNL.

Vo’s favorites include the Swoon shade of the lipstick, which she used as a blush on Merritt. “It looks good on everybody. I also love the contouring sticks, and I like the powder, too, because it sets really nicely but it doesn’t look too makeup-y. They came out with really strong hero products. They’re so easy and goof-proof.”

Highlighter is a matter of preference, according to Vo. “I like a strong highlighter. Some people just want a wet dewiness but some people like me want to burn out some corneas.”

Bench Beauty’s highlighter does the job. “This is the gift that keeps on giving. It’s so moist, it’s so beautiful and it looks good on all skin tones.”

That’s high praise from the queen of #DewyDumplings.