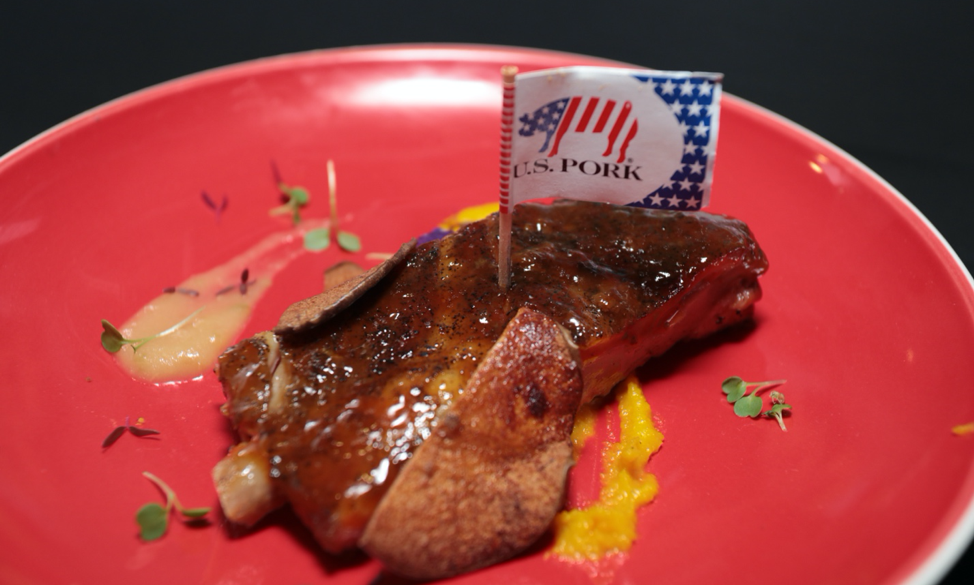 A modern wonder of contemporary living, BGC has rapidly grown its community with their sizeable office blocks and sprawling high streets and parks. As it encourages living with a balance of work and play, it has attracted a lot of creative and passionate minds in the food industry to set up shop in the area, helping it steadily gain popularity as a hub of various gastronomic experiences.

Apart from the unique flavors and great service, restaurants in colorful BGC are also well known for the quality of their dishes, all thanks to the fine ingredients they use such as U.S. Meat.

That’s exactly what the U.S. Meat Export Federation (USMEF) wanted their attendees to experience last November 21. In partnership with some of BGC’s well-loved restaurants—Fireside, Jin Joo, and Mimi & Bros.—the USMEF hosted Five Star Night, a showcase of local chefs and their take on U.S. Beef and U.S. Pork.

The event was opened by Mr. Morgan Haas, the Agricultural Counselor of the USDA Foreign Agricultural Service. As someone who grew up on a farm in Minnesota—and raised pig and cattle himself—he explains that the system set for U.S. Meat products is one of the best in the world, with safety and universal quality guaranteed. He also shares that he immediately felt at home in the Philippines because the first restaurant he went to proudly advertised that they were using USDA-approved meat, which garnered laughter from the audience. When asked about his favorite Filipino pork and beef dish, he quickly answers the famous Sisig and the comforting Bistek.

After the opening remarks, renowned chef and owner of 25 Seeds and Cafe Fleur, Chef Sau del Rosario, shared a few words on his experience with U.S. Meat as the ambassador of Five Star Night. According to him, meat that is able to stand on its own is very important with the way they prepare their dishes at Cafe Fleur. With the marbling, taste, and overall high-quality of U.S. Meat, he can always rely on it especially with his signature Crispy U.S. Pork Belly and Truffled Macadamia Kare-Kare, where the sauce should just elevate the pork.

The attendees were then treated to three meat dishes prepared by the partner restaurants. First up was the Slow Cooked U.S. Pork Rib with Pumpkin Puree and Apple Chip by Chef Edward Bugia of Mimi & Bros. Chef Edward shares that his favorite way of preparing U.S. Meat is by cooking it low and slow, which is probably the other reason why their pork ribs are so tender. In addition, he raved about the clean taste of U.S. Meat which has the same quality every time.

Next was the Galbi Jjim (U.S. Beef) by Chef JM Libron of Jin Joo, who explained why U.S. Beef Ribs are their beef of choice for the Korean stew. According to him, the good quality of the beef makes the flavors of the dish more appetizing.

Last but not the least is the Fireside House Burger (U.S. Beef)  by Chef Gigi Canlas, who shares that their burgers are made with fine U.S. Beef Patties and grilled to perfection on a woodfire grill. She adds that the burger was only seasoned with salt because the meat could already stand on its own.

In between the tastings, the guests were also challenged with fun trivia games about U.S. Beef and U.S. Pork. Questions include the feed used for U.S. Beef (corn-fed, the main reason why the meat is tender, flavorful, and juicy) and the best parts to use for various pork dishes (Belly for Bacon, and Loin for Pork Chops). Everyone gained new meat knowledge that could come in handy in grocery shopping, but the winners took home GCs from each of the partner restaurants.

To cap off the night, ASEAN Director of the USMEF, Ms. Sabrina Yin, closed the event by thanking the guests for making their first event in the Philippines a success.

The U.S. Meat Export Federation is an non-profit organization which aims to increase the value and profitability of the U.S. beef, pork, and lamb industries by enhancing demand for their products in export markets through a dynamic partnership of all stakeholders. Simply, their goal is “Putting U.S. Meat on the World’s Table.”