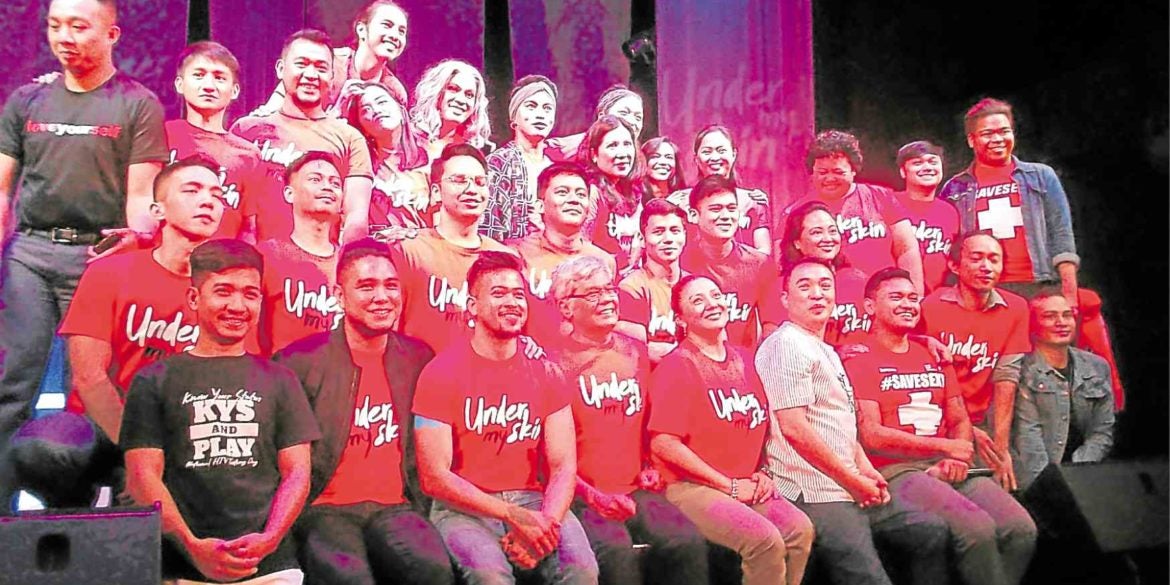 ‘Under My Skin’: Peta’s season-ender is an HIV awareness play

PH has fastest growing HIV epidemic rate in the world—‘We want to educate, not just entertain’

The Philippines has the fastest- growing HIV epidemic rate in the world, according to the Joint United Nations Programme on HIV/AIDS (Unaids), with an estimated 70,000 cases at the end of 2018.

The cases include men who have sex with other men, those contracted through tuberculosis, and a wife contracting the virus from her husband and passing it on to her child.

In the face of these grim statistics, the Philippine Educational Theater Association (Peta) brings its 52nd season to a close with an “art and advocacy” play by Rody Vera, “Under My Skin,” directed by Melvin Lee and starring Cherry Pie Picache.

This was announced during a recent press conference at the Peta Theater Center (tel. 87256244) in New Manila, Quezon City. Excerpts from the play, performed with intensity by the cast, were presented during the press launch.

Based on real stories

“Under My Skin,” taken from real life, is actually three stories in one. “I decided to write in multiple stories that will somehow mirror the overwhelming increase of HIV cases,” said Vera. “And yet nobody seems to be alarmed, thinking it’s just a ‘gay’ disease.”

Picache (with alternate Roselyn Perez) plays Dr. Gemma Almonte, an epidemiologist at the Department of Health who is treating HIV cases and battling the tide of public indifference. The first story deals with Dino (Dylan Talon/Ekis Gimenez) who finds that he is HIV positive due to tuberculosis. Shocked and angry at first, Dino’s mother soon learns that HIV-AIDS is not just a family but a community issue, and should be solved as such.

Mary Rose (Gold Villar-Lim/She Maala) discovers that her young son has an HIV-related gastrointestinal infection. She also learns that she had passed on the virus to her child, which she had contracted from her husband.

Offering comic relief (and more than that, of course) is the story of the beauty parlor owner and comedy bar singer, played with gay abandon by Dudz Teraña (one of the Care Divas). He is suing his employer for discriminating against those with HIV.

“The play is not just a platform for AIDS-HIV but sexuality, sex, for that matter,” said director Lee. “After each performance there will be a dialogue with the audience, whether young or old. We want to educate, not just entertain.” HIV-AIDS specialists will join the discussions.

Project partners are the volunteer organization Love Yourself and HIV advocate The Red Whistle, with further support from Unaids and Unilab.