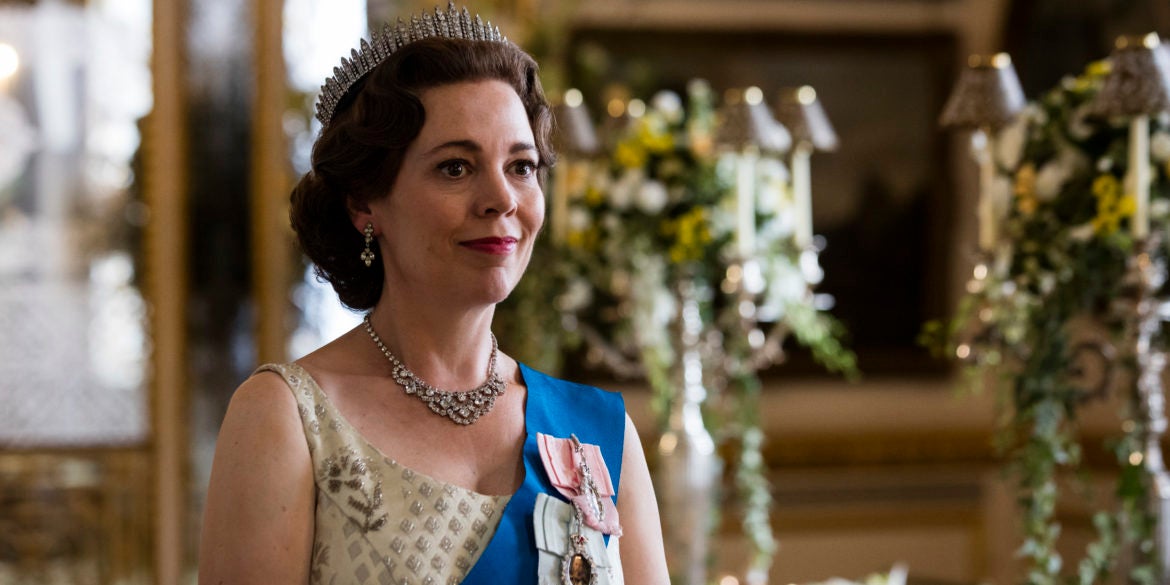 “Have you been watching all day?”

Olivia Colman just walked into the room, still dressed like Queen Elizabeth II but with the addition of a puffy jacket and Uggs.

It was a cold November day in 2018 and we were in Lancaster House where we did spend the day watching as they shot an episode of “The Crown.” 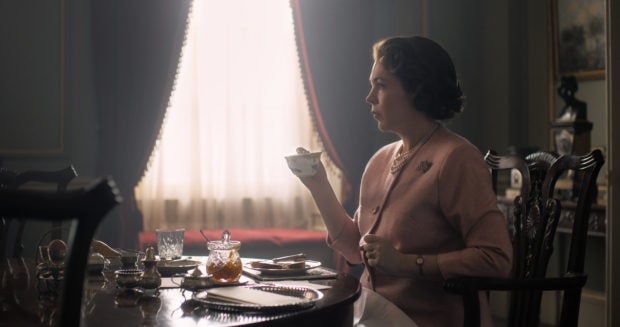 Between takes, we saw the English actress on the monitors as she chitchatted and chuckled with the people around her. “Is that a detachable collar?” she asked one actor. But the minute they yelled “Rolling… and action!” she snapped into character. No longer Colman, she was the Queen, greeting the astronauts who had come to visit her at Buckingham Palace.

Colman replaced Claire Foy as the Queen in the third season, a role she accepted with no hesitation. “It was a very quick ‘yes, please,’” she said.
She did talk to Foy after, who told her that she would love the job and that she should do it. “I told Claire how incredible she was because I was completely hooked.”

Colman, who calls herself a huge fan of the show, had binge-watched the first season. She watched the second season after finding out she had gotten the job. “It was weird to watch it knowing. I kept sort of gulping, ‘Oh god.’”

Colman’s husband added to the pressure by raving about Foy’s acting skills as they watched together. “My husband just kept saying, ‘She is amazing.’ All right. Yeah, okay, thanks,” Colman said, laughing 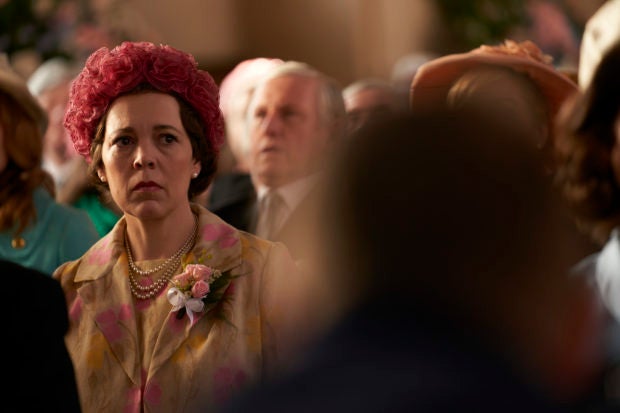 But Colman is amazing too, as fans of the show have seen, now that the new season has been streaming on Netflix. She is, in one word, brilliant.

Not that there was any real doubt that Colman could pull it off. She is a phenomenal actress who, on the same year she was cast in “The Crown,” won the Best Actress Oscar for playing Queen Anne in “The Favourite.”

“They can’t be compared because they could not be more different. It’s just by accident that there have been a couple of queen jobs. It’s all fun,” she said.

For Colman, playing a real person is a special challenge, especially one that everyone can recognize. “It’s quite daunting. It’s weird. Everyone knows what she looks like. There’s only one woman in the world with this hairdo,” she said, touching her hair which had been wrapped for protection. “I try not to think of that. It’s harder, actually, following Claire Foy.”

But it was a challenge Colman faced head on. “I mean, it wasn’t a character that she had invented. We both have to do our own view of it. Claire just said that everyone’s there to help you, the voice department… everybody. Once you get all the garments on, you feel, ‘Oh cool.’ And look at the sets. It all helps.”

Colman had movement sessions, too to learn how to move like Queen Elizabeth. “I’m really bad with my physical knowledge. Ben (Caron), the first director, the lead director, had to keep shouting, ‘Queen, not farmer!’ to tell me when I’m walking like a farmer because I do. And I had to remember to stand up straight.” 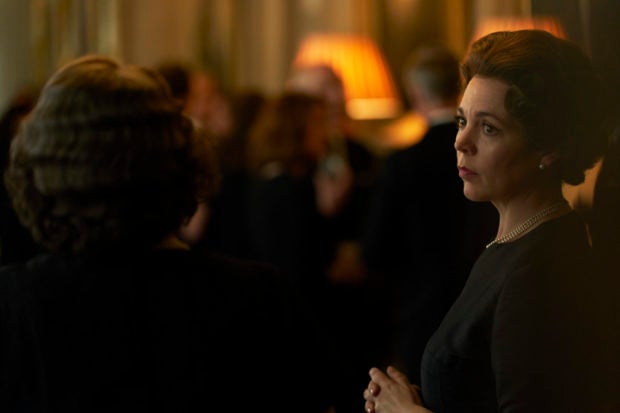 When asked how different the Queen is in the third season, Colman said, laughing. “Well, this one’s got brown eyes. She’s older. With each episode, they’re sort of adding a few little grays on the side. The aging is happening. She’s more settled in her marriage. They’re more comfortable together. They’ve got slightly more mature I suppose and grown up.“

Playing her husband Prince Philip on the show is Tobias Menzies. “I love him. I’ve known him for a few years before anyway through a mutual friend. He’s brilliant and he’s so cool and calm and professional and fun to be around. It’s lovely. There’s an app called Marco Polo where you just send videos to each other. He keeps sending me videos of him in various states of being Philip. We have such a nice time. It’s lovely.”

Helena Bonham Carter plays her sister Queen Margaret. “Everyone had said, oh you’re going to love Helena so I sort of bounced in, couldn’t wait. And they were right. She’s just, oh my god, she’s big-hearted, gorgeous… really really lovely. At the slightest hint of a sniffle, she goes, ‘I’ve got this wonderful homemade mixture of fruit juice’ and she cures everybody with her homemade medicine.”

Colman is all praises for her costars. “Working with everybody, when they’re doing their bit, I find myself going, ‘God, they’re truly good.’”

A journalist asked if she has imagined the Queen watching her. “Oh no, don’t do that,” Colman said, the room erupting in laughter. “No. I don’t want her to watch it.” 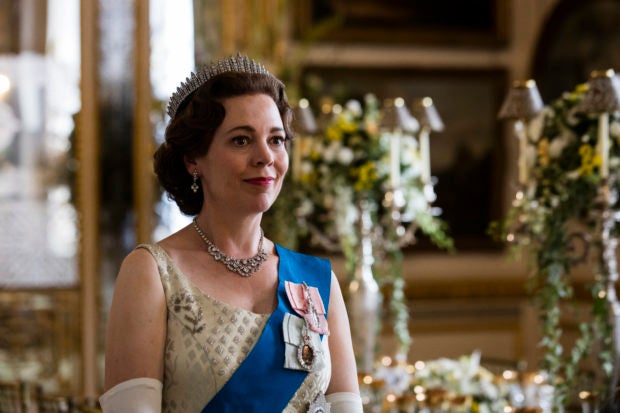 She does admire the monarch. “I actually am an enormous fan of the queen. I think as a human being, she’s f*cking marvelous. I think she’s an amazing human being and I wouldn’t want that job for anything,” she said. “I think she’s like our rock, our even keel. I think when she goes, I think we will be thrown into quite a state of.. don’t know what to do when she’s not there. I think a lot of bad things politically maybe didn’t happen because we have her. She’s not meant to exercise any sort of influence but I think she can make sure that people remember the commitment they’ve made to their role and things.”

Slipping into the role has increased that admiration even more. “I think she’s amazing and the stuff she’s gone through, and the core of steel she’s had through some of this stuff. And she has really tried to make the right decisions… During this process, I’ve become more and more of a fan.”

With the show having such a huge global following, someone asked Colman if she’s ready for all the attention. “I don’t really leave my house. I don’t like it. I’m not very good at it. I never signed up for it. And I know that’s an unfortunate side to my job and 99.9 percent of fans are so nice. But I’m bit of a chicken. And it’s odd that that I’m here and you’re looking at me… it’s odd.”

Acting is really the part of the job that she loves. “I turn up and do as best I can, but I’m still me, I go home and I’m still me.”