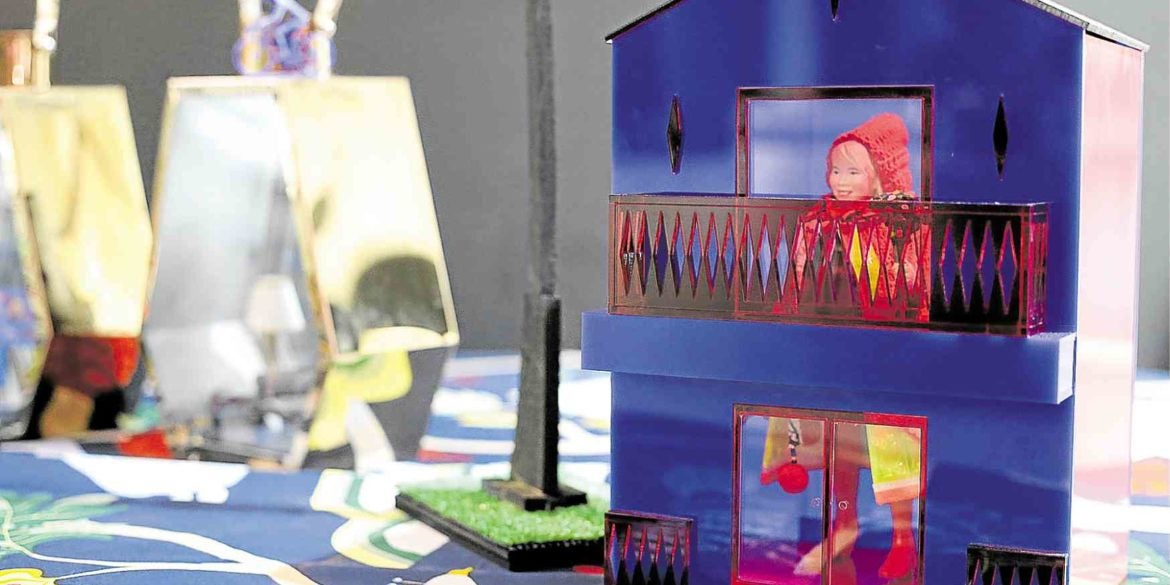 Nobody understands the truth in George Bernard Shaw’s aphorism better than artists, who instinctively grasp that the creativity that fuels their work comes from the same source that’s unlocked by a child’s open-ended play.

On a recent visit to the charming pied-a-terre of Elmer Borlongan and Plet Bolipata—the power couple of contemporary Filipino art—we found both hard at work, or rather, hard at play, preparing for their current simultaneous exhibit at Secret Fresh.

Arrayed on a table, in perfect formation, were 45 8-inch dolls, each an uncanny miniaturization of Bolipata herself, down to her trademark dyed hair.

Dressed in identical frocks, each bearing a bouquet of flowers in one hand and a butterfly in the other, they called to mind Bjork’s song “Army of Me.” They were an army of Plet.

“The exhibit is called ‘I Am My Own Muse,’ after the words of Frida Kahlo,” the artist explained.

It was still a work in progress, she added.

“It’s my love letter to New York City,” she said. “I lived there for a couple of years. Little Red Riding Hood was a mischievous adventurer. The city is so filled with adventure and love and danger, so you have to be prepared. It’s the story of my life. That’s how it all started.”

New York also provided the immediate means to translate this story in her head into reality.

On a visit there earlier this year, Bolipata discovered a service called Doob-3D: For a certain amount, they would scan your entire body with a 360-degree array of cameras and 3-D print a miniature replica of yourself.

“The idea of making a doll of myself, it’s taking the self-portrait to the modern age using advanced technology,” she said. “You’ll never be this age again.”

It was later she figured out that the doll could also be replicated endlessly, to become the central figure in the personal mythology she was constructing.

For his part, Borlongan had been channeling his renewed obsession with music, in particular, music configured as vinyl records, into his art.

His show is called “Surface Noise,” after a well-known quotation by the legendary BBC DJ John Peel that every vinylophile knows by heart:

“Somebody was trying to tell me that CDs are better than vinyl because they don’t have any surface noise. I said, ‘Listen, mate, life has surface noise…’”

As a painter, Borlongan has been particularly attuned to life’s surface noise—the odd dissonances in daily life that most people miss. It’s just that, lately, the artist has become an obsessive record collector and audiophile, and it’s begun to seep into his work.

“Record Digger,” one of the four six-foot circumference paintings that make up “Surface Noise,” is part self-portrait, he admitted.

It depicts one of his iconic bald-headed figures as crate-digger: a picture of intense concentration as he leafs through boxes and boxes of records, looking for that perfect vinyl find.

As always, Borlongan’s technical mastery of his medium is on display.

The artist’s own love for music is evident in the extreme detail with which he paints the album covers. (Trainspotters will note, among others, the Beatles’ “Abbey Road,” Sting’s “The Dream of the Blue Turtles,” classic albums by U2, Bowie, Michael Jackson, Kiss, etc.)

Borlongan’s everyman figure recurs twice as a club DJ: once as the central figure in another round painting, and again as a life-size sculpture manning the decks in his very own booth.

The painter also has his own limited-edition run of figurines he calls “Hari Sonik,” a recurring figure in his paintings, now rendered in three-dimensional vinyl, of the same bald-headed dude, only now with a loudspeaker for a body.

“Five years after we got married, we decided to move to Zambales,” he recalled, referring to their main home and studio in San Antonio, where they produce the bulk of their work.

“We consider it a playground for grown-ups,” he said. “It allowed us to explore all sorts of things that are expressions of ourselves and our lives.”

Lately, there has been a movement away from the high seriousness of traditional gallery shows toward a more playful approach to art. Projects such as “I Am My Own Muse” and “Surface Noise” and “Hari Sonik” may appear to be diversions from the artists’ more canonical body of work, but make no mistake, they’re of no less importance to both artists.

In practice, said Bolipata, their work and their play are the same, there’s no clear dividing line between the two—they may actually be the same process.

“It gives you an opportunity to push your imagination,” said Bolipata. “When it comes to toys, they give you another angle to your art-making which is also imaginative, but pushes it to another level. It’s an adventure to get you out of your studio. When you’re painting, it’s more reflective of your life: You have to deal with your angst, your anger, heavy emotions. Here, you’re just playing.

“Of course, that’s not discounting the pressure we put on ourselves,” she added. But it’s still your innate artist’s sensibility that comes with you when you make your toys. You’re still the same person. It’s really your own truth.”

“I Am My Own Muse,” “Hari Sonik” and “Surface Noise” are on exhibit at Secret Fresh gallery until Dec. 13.