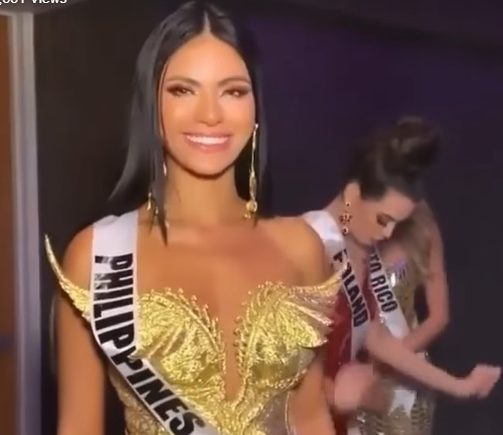 Ganados, 23, made it to the Top 20 of the Miss Universe 2019 pageant Monday, as one of the wild card candidates.

“I’ve always been an optimist. There’s still a non-regional based top 5 and wildcard! Crossed fingers. For the Philippines. Laban tayo!” Ganados said in a Twitter post prior to being called by host Steve Harvey.

I’ve always been an optimist. There’s still a non-regional based top 5 and wildcard! Crossed fingers 😭🙏🏼 For the Philippines. Laban tayo! 🇵🇭

Thereafter, she was finally called by Harvey as part of the last five candidates to enter the Top 20.

“Gazini which is from Gazan which is from my dad’s name, Christiana because I was actually born after Christmas so I’m (born in) December 26,” Ganados said when asked about the meaning of her name.

“So what you guys don’t know is that this is a great opportunity for me to shout out to my friends and family who give me one gift for Christmas and on my birthday,” Ganados said, in jest, drawing laughter from the crowd.

“So guys, Steve, I only want one gift this Christmas and my birthday, and I think you already know about that,” she added.

Should Ganados win, it would be a back-to-back win for the Philippines after Catriona Gray’s victory last year.

She would also be the fifth Filipina to win the crown after Gray, Pia Wurtzbach in 2015, Margie Moran in 1973 and Gloria Diaz in 1969.

Here’s the list of the Miss Universe candidates who advanced to the competition’s Top 20: