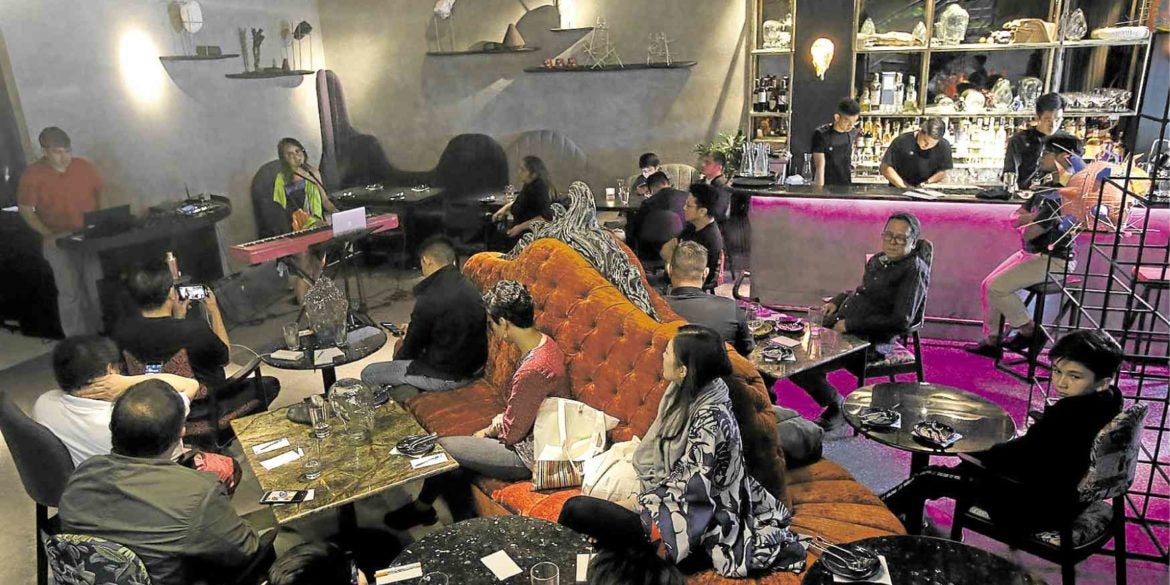 A cozy atmosphere, with Kate Torralba on the keys —PHOTOS BY RICHARD REYES

Kondwi: The bar as art space for young café society

The northern side of Poblacion in Makati is an emerging prime location for venues with an artier, more experimental bent

Makati’s old town center, Poblacion, which has become the go-to spot for the city’s young café society, has continued to expand and evolve to meet the ever-changing moods of today’s diverse market.

Poblacion’s north side, primarily a working-class bedroom community, is emerging as a prime location for venues with an artier, more experimental bent (in contrast to the rowdier tourist area along P. Burgos Street).

Kondwi “provides a spacious, two-level playground that fluidly functions as gallery, black box theater, bar, café and retail space… The name is a play on the word ‘conduit,’ which is the driving principle behind the space as the point of intersection for various creative ideas and practices.”

Nonnatives will need Waze to find Kondwi, which is closer to JP Rizal than Kalayaan. Once you get to Albert Street, however, you can’t miss it: a stark black modernist loft, “Soho in Makati” as a fellow scribe describes it, right in the middle of a homey, small-town neighborhood.

In fact, the locals were holding rehearsals for a procession in honor of the Nazareno right outside Kondwi when we came for a visit one Saturday afternoon. Imagine our sense of dislocation when the doors opened and we found ourselves mid-spiel in a matinee performance by quirky singer-songwriter Kate Torralba.

“Thanks for helping me save money, guys, because my therapist now charges P4,000 an hour,” says Torralba to the audience. “Am I in the wrong industry? Four thousand bucks! For listening to girls like me talk about men who won’t text back! So… here’s a song about one of those men, who’s now married to a girl who’s cross-eyed….”

He shows me the cavernous gallery on the second floor, a high-ceilinged 150-sq m loft currently showing works by young artists including Dex Fernandez’s and his viral “Garapata” series, and glassworks by Anna Orlina, winners of the MullenLowe Nova art awards.

Meanwhile, the gallery staff were busy mounting the next exhibit: “Hortus: Musings on Plant Receptacles” which will feature, among others, works by Leeroy New and Lilianna Manahan.

“We’re looking to market the arts to a younger crowd,” adds Laboy. “The idea is to cultivate the market and teach young professionals to collect and support the arts.”

Apart from exhibits and performances, Kondwi will also provide a venue for art workshops.

A spacious cocktail lounge with a well-stocked bar occupies the ground floor.

“The bar is cocktail-forward,” says chef Alex Tan. “We make sure they get the classics right—the Manhattans and Negronis that people expect, but done with very good ingredients. The food is supportive of that, so we do mostly bar food with Asian-inspired flavors, like sinigang and rendang, but in skewer form.”

All in all, Kondwi seems like a good place to get a buzz on before or after taking in some art.