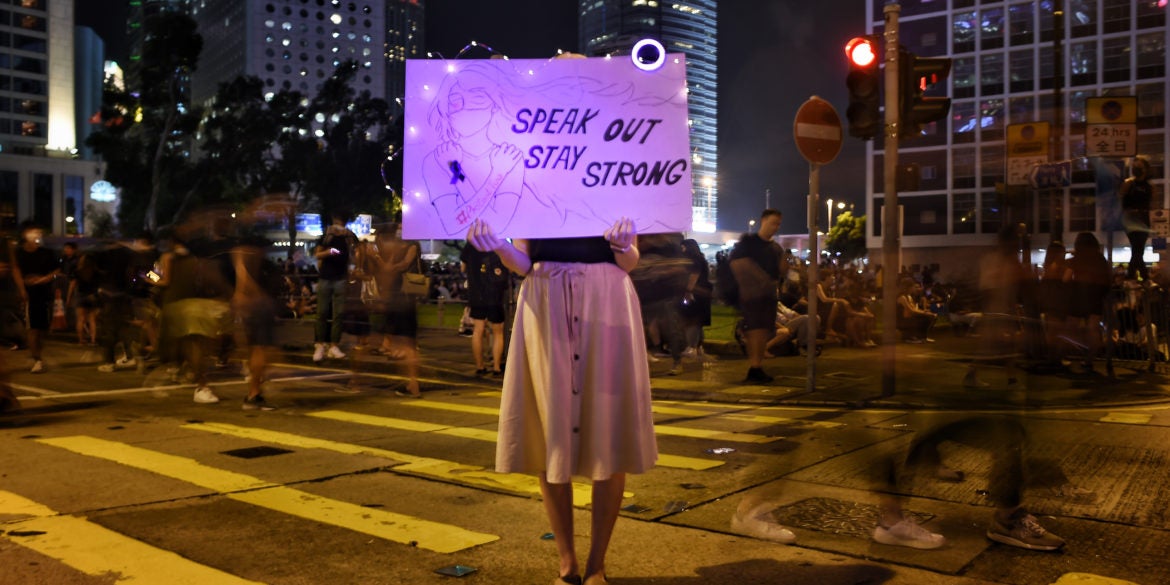 A protester holds a sign at a #MeToo rally in Hong Kong on August 28, 2019, to protest alleged sexual assaults by police against anti-government female protesters. (Photo by Lillian SUWANRUMPHA / AFP)

2019 has been quite an exciting and interesting year with the emergence of youth movements working with older generations to change pre-existing ideologies, compel others to join causes that matter, and to tell their own stories. Thus, making “hashtag activism” even more prevalent.  Ten years after Twitter first popularized hashtags, the use of hashtags has become widespread across various social media platforms. Like anything, it comes with its pros and cons, but hashtags have definitely become crucial in gaining support and increasing awareness for various causes — from political campaigns to social movements. As we near the end of 2019, we’ve culled the most popular hashtags which have served as slogans for the movements that defined 2019 and which we’ll probably see more of in 2020.

If you’ve been sexually harassed or assaulted write ‘me too’ as a reply to this tweet. pic.twitter.com/k2oeCiUf9n

When film producer Harvey Weinstein was first accused of sexual harassment two years ago on October 5, 2017,  actress Alyssa Milano urged women to write “Me Too” in answer to her Twitter post if they had also experienced sexual harassment. Since then, women have been using #MeToo worldwide in the fight against sexual abuse and for gender equality.

Coined in 2018, #TimesUp has been popular since the Time’s Up movement against sexual harassment was founded in January of the same year. As of December 2018, Time’s Up has raised more than $22 million for its legal defense fund and has gathered nearly 800 volunteer lawyers.

By now, you should already know that climate change is one of the biggest issues we are currently facing. According to the United Nations, “the impacts of climate change are global in scope and unprecedented in scale. Without drastic action today, adapting to these impacts in the future will be more difficult and costly.” Last September, roughly 4 million people in 161 countries participated in the largest climate change demonstration in history. This year also saw Swedish climate activist Greta Thunberg as the face of climate-change activism as she continues to raise public awareness and inspire others to make radical changes.

#EmmaWatson at the HeForShe Campaign Have you made the #HeForShe commitment to #genderequality? Click I COMMIT at HeForShe.org

The “He For She” program created by the United Nations in September of 2014 as a call to action to men to support women in the fight for equality gave birth to #HeForShe (thanks to Emma Watson), which remains a popular slogan. Many male celebrities such as Harry Styles, Tom Hiddleston, and Joseph Gordon-Levitt have also spoken out in support of this movement.

Today is a big step in our march toward equality. Gay and lesbian couples now have the right to marry, just like anyone else. #LoveWins

In 2015, minutes after the U.S. Supreme Court announced its landmark 5-4 decision to strike down state bans on same-sex marriage as unconstitutional, the Internet went all out to show its support for the LGBTQ community. Since then, hashtags like #LoveWins, which went viral (6.2 million tweets in six hours) after President Obama’s tweet, #LoveIsLove, and #Pride, have been widely used by the LGBTQ community and other advocates of gender equality.

Cover image: A protester holds a sign at a #MeToo rally in Hong Kong on August 28, 2019, to protest alleged sexual assaults by police against anti-government female protesters. (Photo by Lillian Suwanrumpha/ AFP)