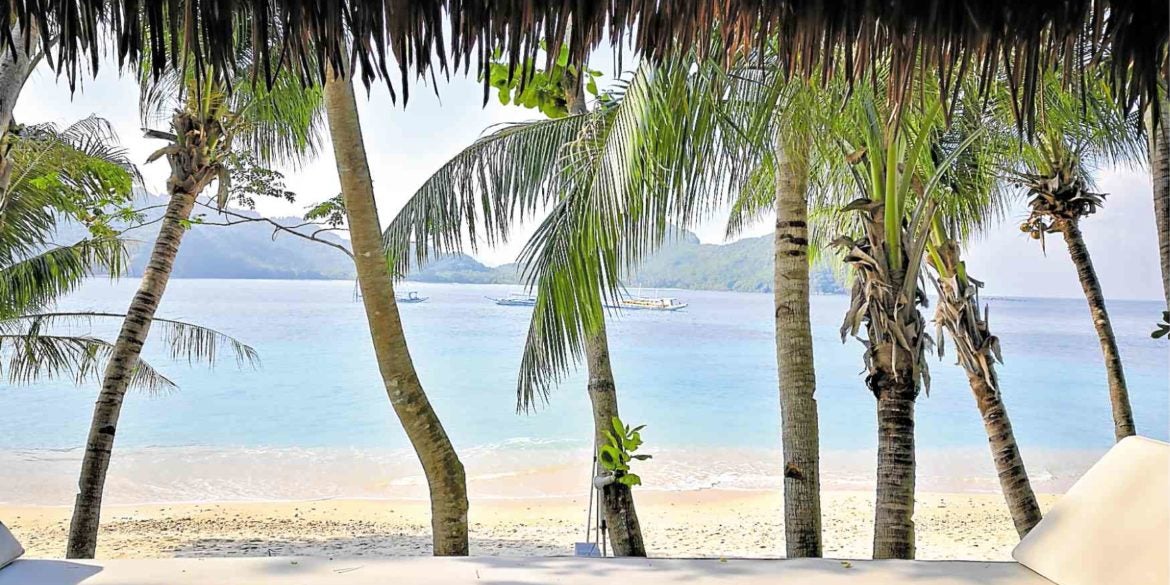 With other El Nido Resorts, it stands for luxury travel and sustainable lifestyle/tourism

The reopening of Pangulasian Island Resort in El Nido, Palawan, earlier this month was awaited by luxury travelers eager to again experience the island’s myriad charms. After all, the property was once more listed by Condé Nast Travelers as one of the Top Resorts in Asia in its 2019 Readers’ Choice Awards.

For six months, the famous resort was closed for refurbishments, foremost of which was the replacing of the thatched, peaked roofs made of cogon grass, a signature detail of the resort’s structures.

“It costs around P2 million to replace the cogon for each villa,” said resident manager Heidi Hocson.

The painstaking work includes finding a reputable supplier, tying up the grass into uniform bundles and affixing them on the roof layer by layer. This time, they’re trying out synthetic cogon that’s hardier.

“It’s fine if the roofs are exposed to the elements (rain, sun) and sea spray as long as they’re able to dry out properly. Most of the villas, however, are shaded by trees and sometimes the roofs don’t dry out completely,” Hocson said.

The trees are there not just to provide shade. They also let the guests enjoy privacy.

Luxurious privacy is one of the hallmarks of Pangulasian. The villas are partially obscured by the trees and foliage, so as one approaches the island on a speedboat, all one initially sees is the reception area.

“Our goal was to keep densities low and to make guests feel they have the place mostly to themselves,” Ten Knots president Javi Hernandez said in a statement.

The resort’s 42 villas have high roofs that allow air to circulate, cooling the interiors throughout the day.

The sliding doors open up to a view of blindingly blue sea. Guests can then access their own slice of beach at any time— taking the stairs leading directly to the fine sand.

“Each villa has its own defined space to allow privacy. It is surrounded with natural landscaping. Villas are tucked behind trees. The canopy villas located on higher ground are on stilts but look like they are part of the landscape. From the shore, you see the trees and greenery before you see the structures,” Hernandez said.

Many guests return to Pangulasian because they like to be left to themselves to enjoy nature, he added.

Pangulasian is also known as the “island of the sun” because both sunrise and sunset are visible on opposite ends of the island. A new wooden deck was added just off the reception area and in front of the bar where guests can sit on lounge chairs and down a few cocktails while gazing at the sunset.

Don’t miss out on chef Rick Abasta’s cooking. The chef is a hotel veteran who joined Pangulasian eight years ago.

On our recent stay, we feasted on his tomato-rich beef kaldereta, Korean chapchae and addicting chicken teriyaki.

Pangulasian is the jewel of Ten Knots Development Corp., owner and developer of El Nido Resorts that includes Apulit, Lagen and Miniloc.

It was thus quite surprising to find out that until it was fully developed and opened to guests in 2012, Pangulasian used to serve only as the other resorts’ “club house”—a place where guests would be brought for the day to enjoy a picnic lunch and some snorkeling.

Now, all four resorts have come into their own and cater to different kinds of travelers.

Miniloc has a beautiful house reef where guests can snorkel alongside huge jacks (talakitok) and schools of big-eyed scad (matambaka) whose scales glimmer in the sunlight.

Last year, it installed its own pool so guests don’t have to move to Lagen if they want to chill poolside.

Pangulasian resident manager Hocson’s favorite is Apulit Island with its rooms on stilts set against imposing limestone cliffs. “I like that each sea view room has steps that lead directly to the water so guests can take a quick dip whenever they feel like it,” she said.

This year, El Nido Resorts is celebrating its 40th anniversary and has lined up promos that can be viewed on www.elnidoresorts.com.

She told Lifestyle that Filipinos have a renewed pride of place, one that faltered in the past.

“With 111 million domestic travel trips recorded in the past year, Filipinos have never been this proud about their heritage and wonders,” Puyat said. “When we launched our refreshed ‘It’s More Fun in the Philippines’ campaign, we had over 5 million user-generated content showcasing the many facets of tourism in the Philippines.”

One of her passions is sustainable tourism. Last month, she was front and center at the launch of the Department of Tourism’s SOS (Save Our Spots) campaign held in Lio Beach, El Nido.

“We coincided our launch with Ten Knots’ and BBC Earth’s premiere of their AVP featuring El Nido Resorts’ initiative to give a new and sustainable livelihood to fishermen in the area.