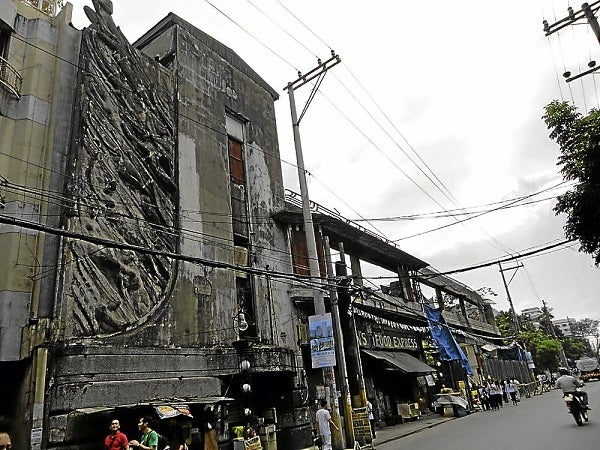 It was designed by architect Juan Arellano in 1936. Its façade has relief sculptures by Francesco Ricardo Monti.

The Arellano-Monti collaboration makes the building even more significant.

According to architect Paulo Alcazaren, the Meralco Head Office is “one of the key urban edifices in burgeoning Manila, the headquarters of the power and transportation company Meralco (Manila Electric Rail and Light Company). It was one of the most modern commercial buildings in Manila before the war and was designed in the Art Deco-streamline style. It had the country’s first air-conditioned office spaces (Carrier). The building’s most distinctive feature was a tall (four-story) sculptural relief by Francesco Monti.”

Last Feb. 4, we received information from a heritage advocate who happened to drive by the building, that it was almost gone. He added that if nothing was done over the weekend, the façade could be gone by Monday. Given that it was a weekend, it was a challenge getting government bureaucracy moving.

Republic Act No. 10066, also known as the National Cultural Heritage Act of 2009, prohibits the demolition or modification of any building 50 years or older without the permission of the National Commission for Culture and the Arts (NCCA).

Local building officials must now include this requirement in all applications for demolition permits of these old structures that are now covered by a presumption of heritage value. This also means that they are also not allowed to condemn heritage buildings without the permission of the NCCA.

There was a lot of concern about the Monti sculpture. Architect Manolo Noche notes: “More than any other works by Monti, the ‘Furies’ is his one big commissioned bas-relief that is not religious in nature. This should be declared a national work of art. If lost, this is tantamount to artistic murder.”

Silvanna Ancelloti-Diaz of Gallerie Duemila, who has made extensive documentation of the works of Monti in the Philippines, pointed out the plight of the said Monti work during a meeting at the NCCA just two days before.

A determined campaign to halt the demolition was initiated on the Internet. Alcazaren posed the question, “Why lose another heritage building? Why don’t people see the value in conserving layers of history?”

He adds: “[Layers] without which we will eventually lose all ties to the past, all hope of a foundation for an urban future, a future that now seems destined to create placeless cites, soul-less buildings, devoid of history, culture or sense of identity, save those imposed by the gods of profit.”

Members of the Heritage Conservation Society (HCS) worked to identify the owners of the building and to appeal to them to stop the demolition. Several members of the Lopez family were contacted.

However, since the Lopezes no longer control Meralco, they referred us to Meralco management. It would later be confirmed that the building was no longer the property of Meralco.

HCS chairperson Gemma Cruz-Araneta immediately contacted Manila Building official engineer Melvin Balagot who then went to the site on Sunday, Feb. 5, to inform them that he was suspending the demolition permit that he had issued.

The Meralco Building property had been divided into two. But a single demolition permit was issued for both sides. One side contained the work of Monti. It was the opposite side that was being demolished. 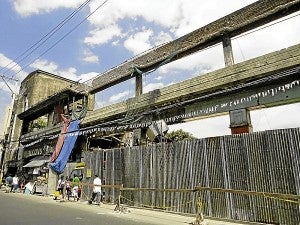 The implementation of RA10006 is no walk in the park.

This crucial incident drove home the point that architects have a large responsibility in the preservation of our heritage sites. After the owners were informed about the value of the structure, they stopped the demolition.

It shows the significant role that the United Architects of the Philippines (UAP) should play in the dissemination of the Heritage Law among its members. If there’s anyone who should have understood the value of the structure, it should have been the architects.

While they may not have had anything to do with demolition, they should have informed the owners immediately that there was a heritage building in their property. The adaptive reuse of the Meralco Building as façade or entrance portal could have been proposed.

As Dom Galicia points out: “There seemed to be no guidance from their architects regarding the value of Juan Arellano. The owners have stopped the demolition and Paulo Alcazaren is going to try to convince them to recreate a replica of the façade, and to preserve remnants of the tranvia barn tracks.”

Alcazaren is now part of the team of architects that will incorporate the Meralco Building façade in the new structure.

Another realization is that it is not part of the competencies of the Manila Building Official and his staff to know what is a heritage building. Sad to say, the engineers have no training for that. This explains why the Department of Public Works and Highways is among the top violators of the Heritage Law.

A comment left by Ian M. Gilbert, BSc, PGDip BuildingCon, MRICS, MCIHT, from London, points out several issues. He says: “Frankly, I’m stunned that this has been allowed to happen! I had been looking forward to photographing it when I visited the Philippines later this year! RA10066 has been in force for a couple of years now but appears to be still virtually unknown. The architects should have known that this building was covered by the 50-year rule; presumably they have to undertake CPD (Continuing Professional Development) like other professionals?

“Additionally, I would assume that some form of permit would have to be obtained for the demolition and/or new construction works? Whoever has the responsibility for issuing this permit should surely be required to know about this law as it would be one of the legal reasons for not issuing a permit. Certainly, all those in such positions should now be made aware of RA10066 and of who to contact to gain heritage advice.

“Obviously, one of the reasons for such occurrences is that there isn’t a national list of buildings of heritage significance. In the UK they are actually called listed buildings! However, the nature of the 50-year rule means that such a list would constantly be falling out of date as additional structures fall within the age bracket.

“Further to that is the fact that compiling such lists takes years. The legislation to protect heritage buildings in the UK was first passed in 1947 and yet new buildings are constantly being added to the list as they come to people’s attention or their significance is understood. 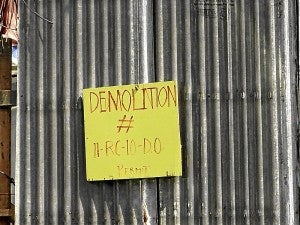 “How much of the original building now remains? You mention that the artwork remains, which is vital. Your photograph at the start of the article dated Feb. also shows the frame of the façade. From photographs I have seen on the Internet, this is also important as the canopy had a ‘stylized eye motif’ which must be retained, along with the curved entrance way and statuette at ground floor level. Similarly, the gate grill and high level metal work must be repaired and reinstated.

“A good architect will be able to both preserve what remains while tying it into a new structure behind the restored façade, although I’m sure we all agree this would have been better without any demolition, at least until those parts of heritage significance could be identified.

“Reconstructing the current remains on a different site must always be as a very last resort. I sometimes deal with listed buildings, particularly railway stations, as part of my work and would like to see this former transport building given a happier future.

“The worry is that if this can happen in the center of Manila and to a building whose importance was raised in the 2010 book ‘Art Deco in the Philippines,’ then what is happening to those buildings in other parts of Metro Manila and also in the provinces?”

Even Anna Filippicci Bonetti, a granddaughter of Monti, reacted. Translated from Italian by HCS trustee Tats Manahan, Bonetti comments: “How much suffering I feel to see the destruction of cultural heritage in Manila! It has cost much hard work for the architects and sculptors. Who knows what Monti, my grandfather, could be thinking where he is. Filipinos must rebel against such destruction.”

The HCS and City of Manila are  coordinating with the Institute of Philippine Culture (IPC) of the Ateneo de Manila University, which has been conducting comprehensive and intensive surveys and research on the built heritage of Metro Manila (NCR), to provide the LGU with that list.

The IPC list covers the entire Metro Manila which can also be submitted to local building officials of other LGUs like San Juan, Pasay, Malabon and Quezon City, which still have a significant number of heritage structures.

The National Museum has also been monitoring the developments.

According to museum director Jeremy Barns, they have been in contact with representatives of the owner of the Monti side. And the Museum has been assured that he is determined to preserve the Monti work.

The Meralco Building, later news about the demolition of the wings of the Misamis Occidental Capitol also by Juan Arellano, and the spate of demolitions that have been going on the past few weeks and months—notably Juan Nakpil’s Benguet Building flattened by SMDC—has finally gotten our policy makers moving.

On Feb. 15, the NCCA finally approved the Implementing Rules and Regulations (IRR) of RA 10066. Although the law has been in effect since last year, the IRR makes its implementation clearer.

According to Barns: “Concerns about the Meralco Building contributed to the concerted effort to approve the IRR or RA10066.”

Our built heritage continues to survive. Every Filipino must contribute to ensure that we are able to pass it on to the next generation.

Ivan Anthony Henares is vice president of the Heritage Conservation Society and represents the Icomos Philippine National Committee in the International Cultural Tourism Committee of Icomos. He is a senior lecturer at the UP Asian Institute of Tourism and writes about travel and heritage in his blog www.ivanhenares.com.