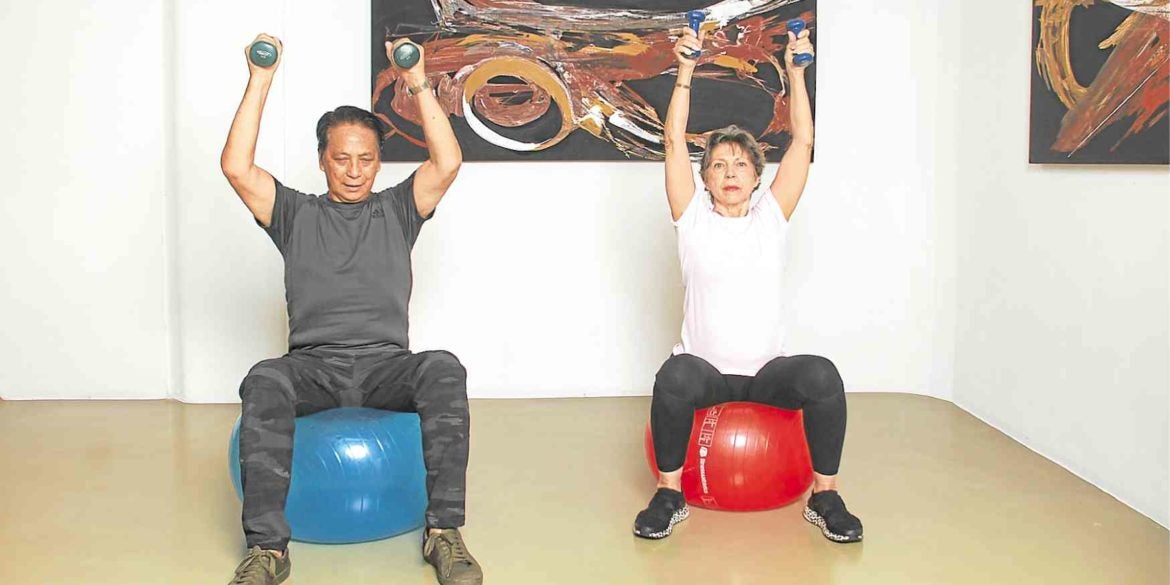 Both cancer survivors, they do a full-body workout program, but ‘the most important thing is your mind’

Artist Ramon Diaz, 75, and his Italian-born wife, gallery owner Silvana, 71, are cancer survivors. To keep cancer cells at bay, they have been engaging in a light exercise program which has improved their well-being.

Thirteen years ago, Ramon discovered that he was already in a progressing stage of prostate cancer. If left untreated, the cancer could metastasize to the lymphatic system. He went to New York to undergo prostatectomy or removal of the prostate through robotics.

Ramon was in good health for 12 years, until the cancer returned in 2018. He underwent radiation.

Today Ramon is in high spirits and keeps busy with his paintings and his vintage cars.

Last year, Silvana underwent a colonoscopy which revealed blockages in her intestines. To arrest the growth of colon cancer, almost a kilo of her large intestines was removed. On top of the surgery, she had to endure six months of chemotherapy.

“It left me physically, mentally and emotionally debilitated,” recalls Silvana.

Their daughter Romina, who was based in Florence, took an 18-month leave from her job to take care of her parents in Manila.

“We are blessed. We wouldn’t have been able to cope without a loving daughter,” says Silvana.

Through research, Romina learned that exercise could fend off certain diseases such as colorectal and prostate cancers.

The Institute of Cancer Epidemiology in Denmark surveyed 55,489 subjects between the ages of 50 and 64. Findings showed that participants who were physically active, prevented obesity, ate a balanced diet, reduced alcohol intake and quit smoking had lower risk of colon cancer.

A lack of activity can lead to high insulin level, which can result in the growth of cancer cells.

The International Journal of Cancer reported a study in 2006 that moderate exercise also reduces the risk of prostate cancer.

Silvana says in jest that it’s a program for people of a certain age.

The full-body workout consists of gentle warm-ups to mobilize the joints and ease the stiff muscles, pelvic lifts to reduce lower back pain and core exercises to improve balance and stability.

The couple also engages in suspension training or hanging from cables while using gravity and body weight to build muscle strength. Then there are dumbbell exercises and push-ups for the arms, shoulders, chest and side muscles.

They perform leg swings with ankle weights to exercise the muscles that are inactive in long periods of sitting. The wall ball squats increase the heart rate and improve the breathing.

Arceo works on their posture and breathing. Ramon had poor habits such as holding his breath and shallow breathing which, could bring about high blood pressure. He would remind Ramon to take slow deep breaths that would relax him and moderate other body functions.

Arceo is correcting Silvana’s forward head posture caused by slumping over the table when she’s at work. He helped her work on correct alignment.

He also taught her exercises she could do on her own to help her recover from a spinal injury.

Although the Diazes have been doing the workout for only a few months, Arceo has noted improvements such as muscle endurance and a stable core.

When they started their program, they couldn’t hold the bird-dog, a balancing exercise on the opposite arm and leg on the floor. Now they can do three sets without wobbling.

Arceo notes that they can hold poses, perform more repetitions and coordinate their muscles with their breathing.

“The most important thing is your mind,” says Ramon, who believes that exercise affects mental health.

He has a friend who suffered a heart attack while on the plane. There was no doctor on board, but an Indian came up to the passenger and told him that his mind had the power to control his condition. Instead of disembarking in Hong Kong, the patient made it to Manila.

“Exercise helps me feel better. My muscle tone is coming back and I can balance,” Silvana says. “It takes a year for the side effects of chemotherapy to disappear. Exercise helps me focus and keep my mind from worrying.”