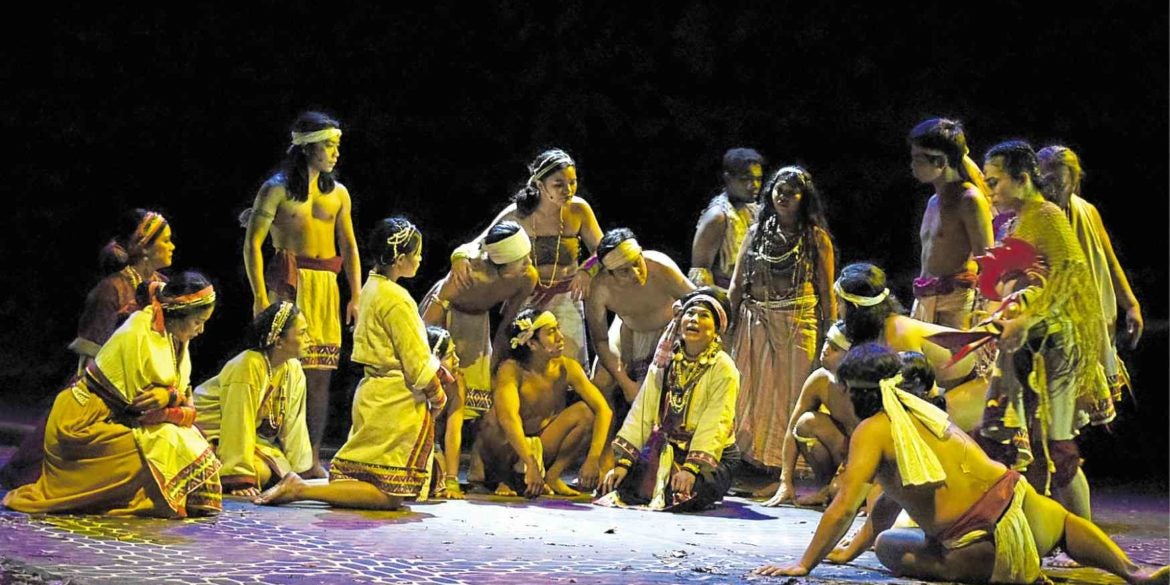 The ensemble of “Lam-ang,” with costume design by Bonsai Cielo and set design by Marco Viaña —ERICKSON DELA CRUZ

Artistic and technical standouts of the year

One major limitation of print publications is the availability of space in any given issue. It is for this reason that the final section of our annual theater roundup, published last Dec. 14, included only our top choices for every design and technical category.

But the designers, writers and musicians are just as essential to any theater production as the directors and actors we recognized last week. What follows, then, is part two of our Best of Theater 2019. Of the 88 fully staged productions we saw in Manila this year, here are the names and works that left a most indelible impression:

In lighting design, Aaron Porter produced the year’s finest work with his psychedelic evocation of the ’60s for “Beautiful: The Carole King Musical” and his black-and-white show of masterly exactitude for “Sweeney Todd: The Demon Barber of Fleet Street.”

Director-designer Ed Lacson Jr. easily exceeded himself with his jaw-dropping theater-within-the-theater set design for “The Dresser,” along with the Instagram-inspired look of “Stop Kiss” that wonderfully simplified the storytelling.

For sound design, Arvy Dimaculangan’s mastery of music and silence was most sublime in “Every Brilliant Thing,” in addition to his topnotch soundscapes for “Laro,” “Dolorosa” and “Freedom Wall”— bravo!

Steven Tansiongco’s projection design for “Makinal” should have earned him a 1.0 for this thesis. The other notable in this field was GA Fallarme for “Angels in America: Millennium Approaches.”

For translation/adaptation, the inimitable Guelan Luarca, besides his script for “Alpha Kappa Omega,” also triumphantly tamed Shakespeare with an easy-on-the-ears “Coriolano,” while Sabrina Basilio emerged as the year’s breakout writer with “Antigone vs the People of the Philippines.” Two more: Eljay Castro Deldoc (“Makinal”) and Nicolas Pichay (“Fuente Ovejuna”).

The sharpest—and funniest—original book of a musical was Rody Vera’s for “Walang Aray.” Plus—Eljay Castro Deldoc (“Hanggang Isang Araw”); and Luna Griño-Inocian (“The Quest for the Adarna”).

Breakouts, brief appearances and readings. Finally, it is only right to recognize the three names that, for the first time, grabbed our attention and now have us looking forward to their next appearances: Nikki Bengzon (“Bring It On: The Musical”); Davy Narciso (“The Theory of Relativity”); and Paw Castillo (“Mabining Mandirigma” and “Lam-ang”). Luis Marcelo and Justine Narciso were a pair of perfectly cast surprises in “The Quest for the Adarna.” In “Beautiful: The Carole King Musical,” Gab Pangilinan and Teetin Villanueva each ran away with her time in the spotlight; ditto Sabrina Basilio in both “Spring Awakening” and “Dolorosa.”

And the Company of Actors in Streamlined Theatre produced two staged readings that may as well have been the real thing. The first was James Goldman’s “The Lion in Winter,” directed by Mako Alonso and Jill Peña, with a delectably icy Roselyn Perez as Eleanor of Aquitaine, and Jaime del Mundo giving the year’s first great performance as King Henry II.

Erratum: In the print version of part one of our Best of Theater 2019, published Dec. 14, the citation for Best Actor (Play) for Marco Viaña mistakenly identified his character in “Katsuri” as Lenny; Viaña played the character of George. The online version of the article has since reflected that correction. Our apologies for this error.