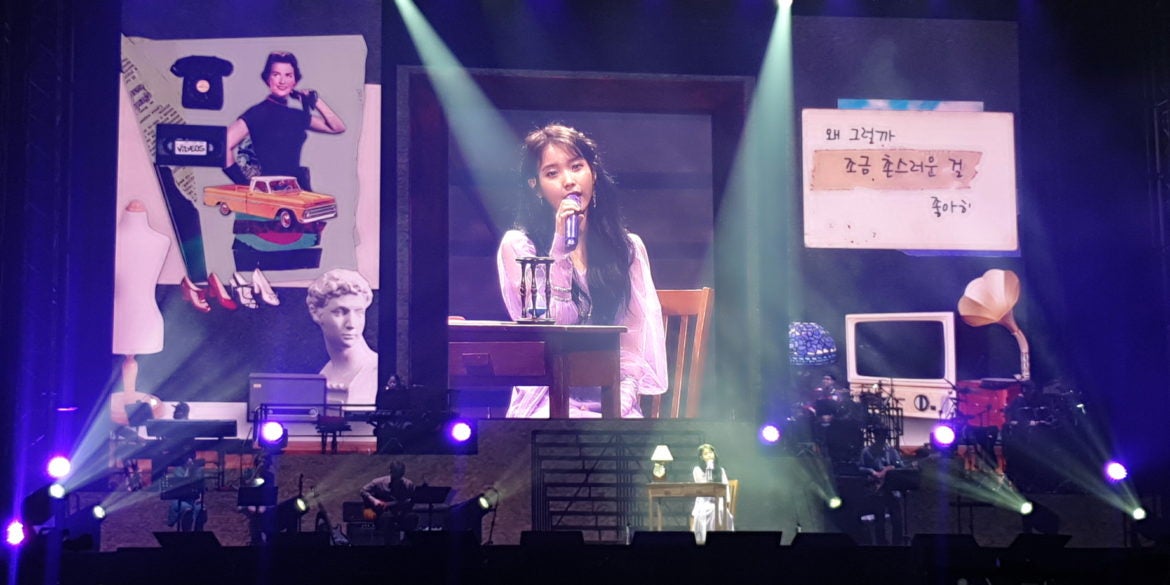 IU fell in love with her Filipino fans. She ended the concert by thanking her fans for showing something so beautiful.

“It feels like I am in love.” This is what South Korean singer-songwriter and actress IU told her Filipino Uenas (fandom name) after hearing their warm reception. ‍IU is the stage name of 26-year-old Lee Ji-eun. She was in the country last Dec. 13 for the Manila leg of the “Love Poem” concert tour at Araneta Coliseum.

She first came out onstage in a dreamy and shimmering long-sleeved purple dress and silver heels. She opened the night with the song “Unlucky” from the “Love Poem” album before proceeding to sing “Palette.” ‍‍‍

“I heard tickets were sold-out. Had I known that I had so many fans in the Philippines, I would have come earlier,” she said to her screaming fans. She also apologized that she couldn’t do a second night because her schedule did not permit it. ‍‍‍

At her first concert in the country, she said she first heard the fan chant for “Unlucky.” The cheerful music belies its lyrics. It’s a song about how it’s normal to be sad. “I wrote the lyrics. It’s okay not to be happy for one day. But I know that day is not today. We have to be happy today because this is the first time we meet in Manila, right?” she said.

When she came back onstage, she was wearing black lace-up boots and a red leather jacket over an oversized black sequined shirt. She sang “Red Queen” and “Jam Jam” and then she ditched the jacket to sing “Twenty Three.”

Everybody was singing and swaying when she performed “Bbibbi.” The title refers to the sound messaging apps make. The upbeat song, a clapback to haters, uses phrases such as “back off, back off,” “Yellow C-A-R-D” and “Hello Stup-I-D” to convey her feelings.

“I named Singapore as the country for ‘Bbibbi’. But Philippines is the mother of Bbibbi. It’s like you guys were the one who wrote ‘Bbibbi.’ You guys are really awesome. Ang galing ninyo,” she said. The fans displayed one of the many projects of IU Philippines during the “Blueming” song. The crowd raised banners with blue roses printed on them. She gave a huge smile and waved when she caught sight of the crowd holding blue roses for her.

Fan chants and banners were not the only thing the Ma-aenas (Philippine Uenas) prepared for the singer. They stomped their feet in synchrony during “Above the Time” and it sounded like the people were Irish dancing on their seats. At the end of the song, they clapped and stomped in unison, too. This made IU grin while singing behind a snow hologram curtain.

The singer spoke English fluently for most of the show. Her Korean was seamlessly translated. But it was when she spoke in Filipino the crowd went wild. She made an effort to know a few phrases beyond “Mahal kita!”

She told her fans “masaya ang pakiramdam ko” when the fan reactions were so loud she couldn’t even hear her own voice. She repeated the phrase “ang galing ninyo” throughout the night. She made everyone laugh when she said, “Iinom muna ako ng tubig.”

She would repeatedly tell everyone that she would be back throughout the night in English and Filipino.

“Babalik ako para makita ko kayo ulit,” she said. She thanked her fans for loving her, saying, “Salamat dahil gusto ninyo ako.”She also told everyone how she is a fan of the acoustic Filipino band MYMP. She asked everyone to tell the band how much she is a fan of them. She covered “Say You Love Me,” a song MYMP covered as well.

IU said that there were songs that are not popular in Korea and internationally that the Ma-aenas were able to sing to. “This is the first time the crowd is louder than the mic. I lost to you, guys,” she said.

She said that she had to sing louder and more powerfully because of that. To their benefit, the fans only limited themselves to fan chants at first. But IU, seeing and hearing their excitement, encouraged them to sing with her.

IU shared her sweet side when she told her fans not to overexert themselves. She inquired about their throats, if they still felt fine. She advised them to go to the bathroom to take breaks and stretch out.

She said that she is not nervous at all which is a good thing because it means she can do her best. She also compared Manila to Busan, saying that Manila has the same passion and warm hearts as the people of Busan. “But today, the ranking really changed. I’m not just saying this. I think that no one can beat Manila,” she told everyone.

The crowd knew that there will be an encore because IU said so. She said that she was saying goodbye, but it was a fake end. She came back five minutes later to sing “Good Day” and “Love Poem.”

The second encore came 10 minutes after the first one. Not a single fan stood from their seats the entire concert.

She came out in black sneakers and a blue flowery dress and purple cardigan, her hair tied comfortably in a bun. She looked like she was going to a jamming session with friends. The second encore turned out to be exactly like that.

“I guess the rumor of an encore has reached Manila. I wanted us to be comfortable,” she said before asking fans for their requests.

A group of fans on the lower box section brought out letters spelling “Leon.” This was what she performed on the spot. She sang “Raindrop” next, saying that the song gets requested in regions where it rains a lot.

She followed it with another requested song, “Someday.” Then she spotted two fans on the crowd wearing “Hotel del Luna” uniforms. The drama, which received high ratings and good reviews, was streamed first on VIU. She pointed at those fans and asked for their song. They requested “Merry Christmas in Advance” and she obliged.

To close the event, she sang the “Ending Scene.” Her fans made sure she shone even brighter by pointing their phones at her with the flashlights on.

IU performed a total of 29 songs. She had five wardrobe changes and the concert lasted for three hours and 45 minutes. It was the perfect gift for fans who waited for her for 10 long years. “The Philippines is so lovely,” she said in the end. The same description could be applied to her.

The “Love Poem” concert tour is sponsored by VIU Philippines.