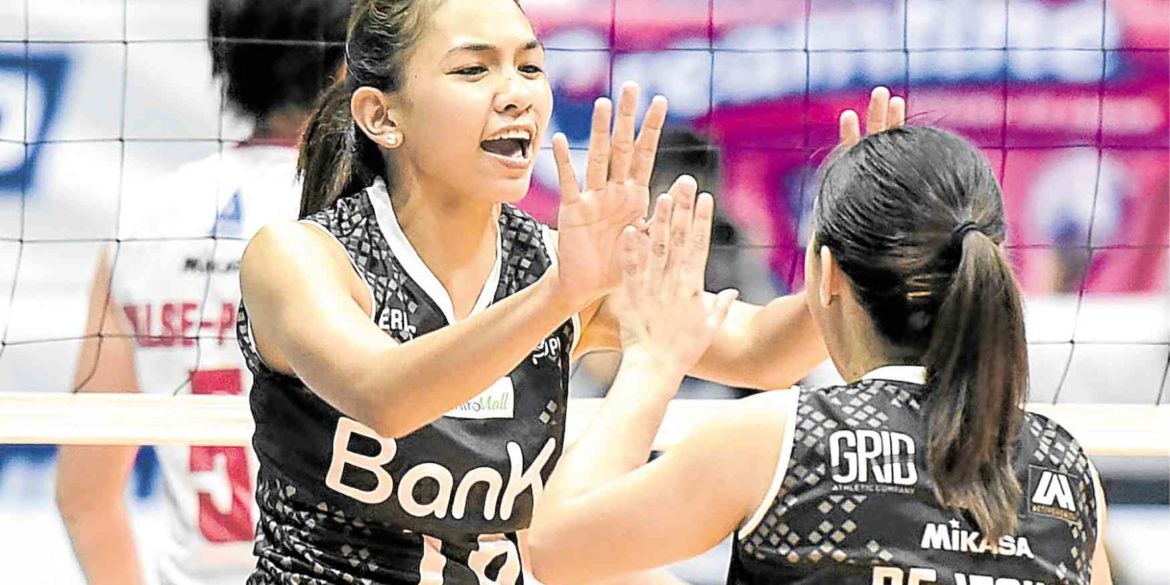 Tiamzon was recruited by the BanKo Perlas team right after she graduated. —SHERWIN VARDELEON

Nicole Tiamzon: From volleyball to vocation

Women’s pro volleyball is the fastest-growing spectator sport in the country today, and it’s not only because of the eye candy (although it certainly doesn’t hurt).

Broadcast live and on primetime, with two professional leagues battling for ratings, the sport has generated a loyal fan base and bred several star players, most of them cherry-picked from the cream of the UAAP and NCAA collegiate teams.

One of them is BanKo Perlas’ Nicole Tiamzon, whom analysts singled out as the breakthrough player of this year’s Premier Volleyball League season.

The former Lady Maroon is known for being a consistent high scorer, able to think on her feet and serving as the glue to hold her team together during a game.

Arguably, she’s in her prime as a professional athlete.

Hard to believe, then, that only two years ago, it was all on the verge of falling apart.

The trigger was the University of the Philippines (UP) Lady Maroons’ heartbreaking loss at the UAAP finals that year, but things had been building up for a while, she recalls.

She was close to burnout, a broken relationship was weighing on her mind, even finishing her Sports Science course at the UP College of Human Kinetics was hanging in the balance.

“I was in a tough situation,” she recalls.

But just when things seemed darkest, a light shone through.

“Finding my purpose was the turning point,” she says. “I think my love language is service—giving back and service.”

Two years before this, she had tried teaching volleyball to kids, and the sense of fulfillment she got from that was something she missed.

This became the genesis for Spike and Serve, the nonprofit grassroots development program that Tiamzon founded in 2017.

Its core activity is simple: teaching underprivileged kids to play volleyball, and organizing community-based leagues where they can compete.

“The vision is to get the community involved through playing,” she recalls. “I just wanted to inspire people. But as I went through the process, I realized that it’s not one time, big time… I wanted to see the kids grow. It’s not just the sport you’re teaching them, but the life values behind the sport.”

Tiamzon started playing when she was 10, and competing in her second year of high school in Siena College in her hometown of Taytay, Rizal. In 2012, when she enrolled in UP, she tried out for the varsity team and was accepted.

“It was a different culture,” she recalls. “At first we trained thrice a week. It was under coach Vip Isada at the time, and it was academics first.”

Later on, training became more intense: twice a day workouts year in and year out.

“You never had enough sleep, and it involved sacrifices: I didn’t get to see my siblings grow up. Birthdays and holidays were sacrificed for volleyball.”

The hard training paid off, however, when Tiamzon’s batch lifted the Lady Maroons from their customary doldrums into the top four of the UAAP, a championship title within their grasp. Almost.

In any case, the training, the discipline, the intense camaraderie was character-building, a formative experience.

Not surprisingly, Tiamzon was scouted and snapped up by BanKo Perlas right after graduation. Even as she was turning pro, she began to build up Spike and Serve, on her own at first, then with a few volunteers.

Sports as a lifeline

“We would go to a municipality, conduct a one-day event, then hold a free volleyball clinic. I focused on local people who wanted to play.”

The target clientele, children under 12, suffered from high dropout rates. They were also at risk of falling into gangs, drugs, criminality.

For vulnerable children like these, sports was a lifeline.

“I’m really using this platform to reach out to kids and build something,” says Tiamzon. “Volleyball changed me, and not just physically—I mean the whole person. May paki sa bansa, sa nangyayari sa kapwa tao. Hindi yung naglalaro lang, living without any purpose.”

“We have separate coaches for ‘huddle time,’ meaning life lessons,” she explains. “We try to incorporate the technical skills into life skills. For example, if you’re teaching them how to dig, the skills coach teaches them why it’s all about ball control. The huddle coach can expand on the idea and teach them about learning to control their diets, for instance. You have to be creative, so they can understand.”

Tiamzon sometimes takes the kids to watch her games, where they turn into her cheering squad.

“For sure, they get inspired,” she says. “That’s why we’re very intentional when it comes to teaching them life values, how to reach their dreams. Not necessarily to be like me or even to be successful athletes. For me that’s just a bonus. If I can keep them playing, finish their high school and finish their college, I’ll be happy.”

As of now, Spike and Serve has about 100 public school students, elementary to high school, in their Taytay center, and another 60 in their newer Quezon City center.

Meanwhile, Tiamzon looks to her faith for guidance.

“There are a lot of things I still want to do, but I think this is where the Lord is bringing me, to keep playing. I can maximize playing volleyball and at the same time promoting Spike and Serve.”