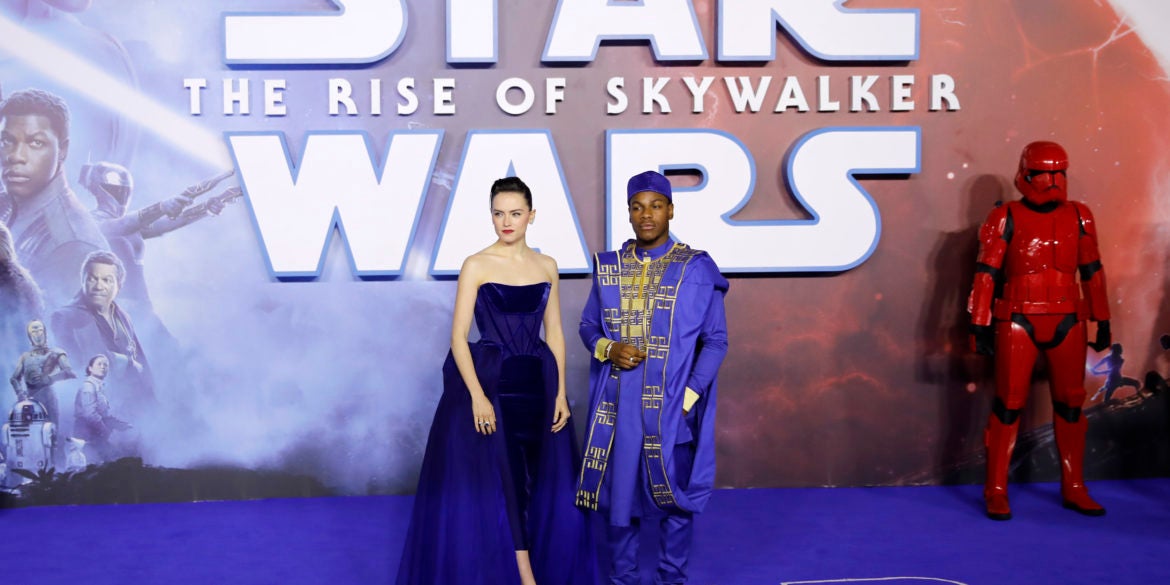 (FILES) In this file photo taken on December 18, 2019 British actor Daisy Ridley (L) and British actor John Boyega (R) pose on the red carpet upon arrival for the European film premiere of Star Wars: The Rise of Skywalker in London. - The force is clearly still with the galactic good guys, as "Star Wars: The Rise of Skywalker" opened with a massive estimated take of $175.5 million in North America, industry watcher Exhibitor Relations reported on December 22, 2019. The Disney film scored the third biggest December debut ever, behind only the two earlier chapters in the "Star Wars" sequel trilogy, "The Force Awakens" and "The Last Jedi," according to Variety."Rise of Skywalker," directed by J.J. Abrams and starring Adam Driver, Mark Hamill, Daisy Ridley and Oscar Isaac, blew away the weekend's competition. (Photo by Tolga AKMEN / AFP)

What’s next for ‘Star Wars’ after ‘Rise of Skywalker’ grand finale?

“The Rise of Skywalker” dominated movie theaters this weekend. But diminishing box office returns, scathing reviews and a plot that wrapped up the space saga’s major story arcs all beg the question — what next for “Star Wars”?

Marketed as a grand finale to the decades-spanning, nine-film “Skywalker Saga,” the latest film hauled in $177.4 million domestically on its opening weekend.

While that would be a stratospheric figure for any other film — indeed, it was the third-biggest movie opening of 2019 — it is notably less than the last two major “Star Wars” installments, “The Force Awakens” and “The Last Jedi”.

Reviews were mainly negative, accusing the movie of falling back on the same overworn “Star Wars” tropes.

A fear of franchise fatigue has already led Disney boss Bob Iger to signal a slowdown in releases, admitting his previous plan to produce a new “Star Wars” each year was “a little too much, too fast.”

Nonetheless, Iger was bullish about future “Star Wars” films at last week’s world premiere, telling AFP that “this is just the beginning,” with potentially “endless” more stories on the way.

“We know that fans will want another film, or another few films, and we’ll make them,” he said.

Details of what is in store remain tightly under wraps and are the subject of much speculation.

Currently, no “Star Wars” films appear on Disney’s release slate until December 2022, to be followed by further untitled movies in 2024 and 2026.

“Now that the ‘Skywalker saga’ is done, we can actually push on and discover new characters and new worlds and new planets. So I find it really exciting,” said Chiang.

Who will oversee the project is less clear. “Game of Thrones” showrunners David Benioff and D.B. Weiss had been due to head up the next trilogy starting in 2022 but dropped out after signing a massive Netflix deal.

A separate, planned trilogy from Rian Johnson — director of the divisive “Last Jedi” — remains in development.

But Lucasfilm head Kathleen Kennedy said in a recent interview that “Star Wars” may even seek to move away from the trilogy format.

“I think it gives us a more open-ended view of storytelling and doesn’t lock us into this three-act structure,” she told the LA Times.

Kevin Feige, the man behind the extraordinary success of the Marvel superhero films, is set to produce a “Star Wars” film — but it remains at an early stage of development, she added.

J.J. Abrams, director of “The Rise of Skywalker” and “The Force Awakens”, is unlikely to be involved. He recently penned an exclusive deal with rival studio Warner Bros.

If there is an undoubted bright spot on the horizon for “Star Wars”, it is the recently launched Disney+ series “The Mandalorian”.

The franchise’s first live-action TV show has proven a hit, not least due to the viral popularity of the impossibly cute “Baby Yoda”, known in the show as “The Child”. A second season is in the works.

As Disney increasingly focuses on its own streaming platform — a direct rival to Netflix, Amazon and Apple, with more competitors on the way in 2020 — it plans further high-profile “Star Wars” shows.

Ewan McGregor will return as Obi-Wan Kenobi for one series, while the stars of hit 2016 spin-off “Rogue One” will also receive their own prequel show.

“As ‘Mandalorian’ points out, this is just the beginning of what could be an endless set of tales told from galaxies far, far away,” Iger told AFP.

“‘The Mandalorian’ has given us the ability to be even a little bit more patient because we feel we’re serving Star Wars fans,” he added.

“And that gives us, I think, the luxury of being even more methodical about this.”