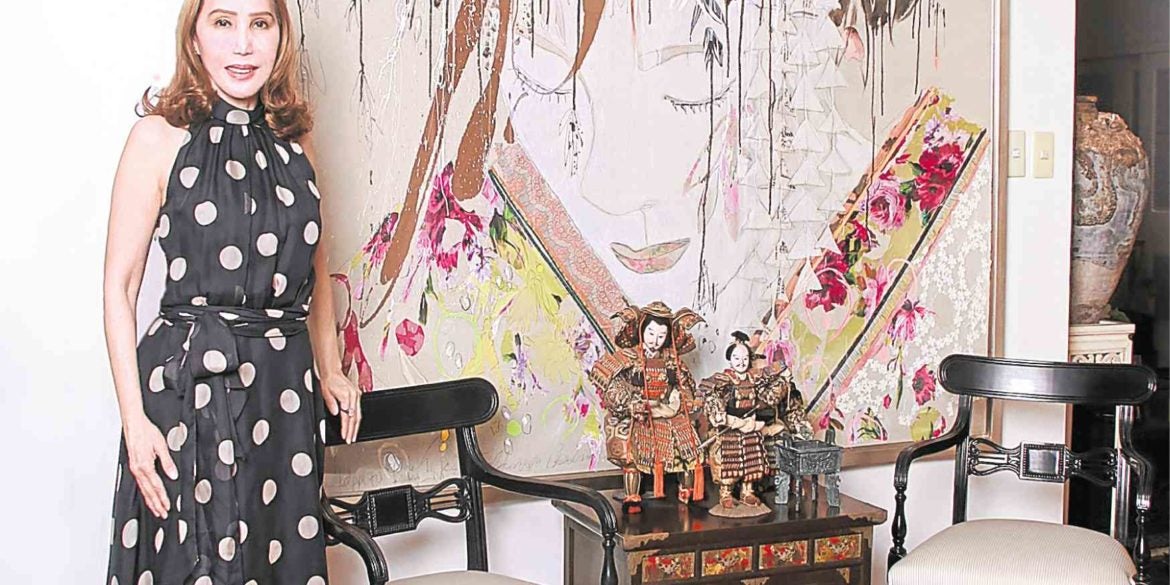 Huibonhoa in a CarolinaHerrera dress, beside the portrait of a geisha by European artists Mersuka Dupaso and Teresa Calderon —PHOTOS BY NELSONMATAWARAN

Why visitors feel right at home at Gambian consulate

A visit to the Honorary Consulate of Gambia in Makati is like a walk through an art gallery.

Honorary Consul Agnes Huibonhoa has dressed up the walls with her personal collection.

At the foyer, National Artist BenCab’s mural of three women is the first stunner. The mixed-media portrait of a geisha by European artists Mersuka Dupaso and Teresa Calderon, given depth and texture with fabric, dramatizes a corner near the dining area. Floral paintings by Isabel Diaz lend exuberance to the living room.

The Almarios arranged the furniture to complement the colors and lines of the art. They surrounded each painting with either smaller pieces or decorative elements such as samurai dolls, Oriental jars and plates.

Sleek symmetry plus cool greens and whites spell tranquility in the Asian-themed guest bedroom. The elements are held together by a framed tapestry depicting ancient Chinese royalty, complemented by antique celadon plates inside acrylic frames.

“Visitors are always surprised,” says Huibonhoa. “They can’t believe this is a consulate because it feels very homey.”

Behind all this glamour is a lot of hard work. Huibonhoa is a seasoned entrepreneur—the family is in real estate and franchises—who happens to take diplomatic work seriously.

An honorary consul is designated by a foreign government to look after their citizens in another country. Huibonhoa originally reported to the president of Gambia (West Africa) but the distance posed challenges to efficient communication. For the past five years, she has been reporting to the Embassy of Gambia in Malaysia.

Her foray into diplomatic work was unexpected. While traveling in London in 2004, she and some family members met up with an old friend, a Gambian businessman whom Huibonhoa had known from the time she worked at the Department of Foreign Affairs. He invited them to his country, famous for white, sandy beaches, nature reserves and safari camps, where Europeans habitually escaped to in the winter—and only five hours from London.

Part of the instant itinerary was a meeting with Dr. Yayah Jammeh, then president of Gambia, who promptly asked Huibonhoa to be his honorary consul. She declined.

Once back in Manila, she received a call from Jammeh informing her of plans to establish bilateral relations between the Gambia and the Philippines. Once more he offered her the job and this time she relented.

After she was formally appointed, Huibonhoa set up a state visit to the Philippines for the Gambian president. Banking on some really sharp organizational skills and her celebrated thoroughness, she did in three months what usually took a whole year.

In 2005, Jammeh met with then President Gloria Macapagal-Arroyo in Manila. During bilateral talks, the two heads of states discussed potential trade ties.

To his new honorary consul, Jammeh mentioned that, as a young boy, he had met former President Ferdinand Marcos and First Lady Imelda. Was it possible to see Ms Marcos? Huibonhoa, ever the solicitous hostess, quickly put together a very exclusive reception with Imelda as special guest.

Jammeh would subsequently endorse the Philippines’ bid for membership in the Organization of Islamic Cooperation (OIC) to protect Muslim-Filipino interests.

Meanwhile, he expressed interest in importing virgin coconut oil (VCO) and making Gambia the supply hub for West Africa. One Gambian businessman did a trial import run but the VCO turned rancid upon arrival. It took Huibonhoa nearly a decade to find a local manufacturer who produced VCO with a longer shelf life. Huibonhoa says the export will finally materialize.

“I never give up,” says Huibonhoa, whose working personality is a virtual combination of cotton wool and steel. “Establishing trade takes time. You have to be extremely patient.”

Meanwhile, the consulate performs such ministerial functions as issuing visas to tourists and Filipino seamen, and student visas to Gambian students wanting to enroll at the International Rice and Research Institute in Laguna.

Huibonhoa considers helping Gambians in trouble, especially in legal or immigration matters, the toughest part of her job. But she will not be stuck at that level.

“This consulate should not be just an office or a place for social functions,” she says. “My goal is still to set trade relations in motion and stay active in the OIC to promote understanding and cooperation.” Thus, she has stayed the course.

Out of the workplace confines, she has worked for years now with the Philippine Cancer Society, actively helping indigent patients. She organizes annual medical missions and holiday gift distributions in a Sampaloc community. A Marian devotee, she has also been maintaining the Our Lady of Manaoag chapel in Manila.

“These charities and this consulate are my world,” she says. “I have come to realize that public service, which I now know is my life’s purpose, informs diplomatic work—and vice versa.”