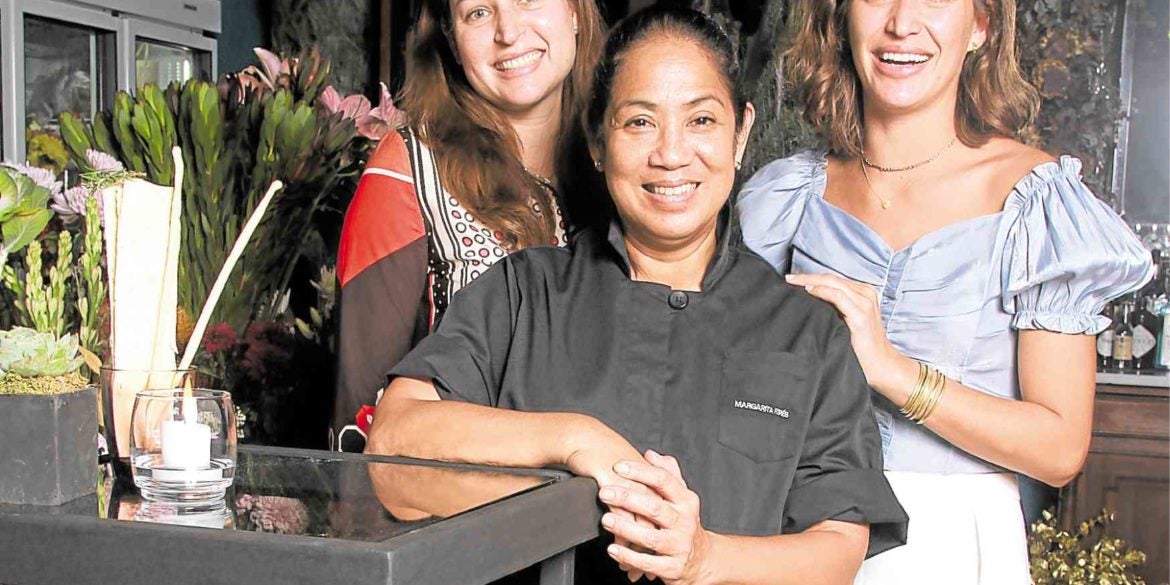 Forés collaborates with Lanai for ladies who lunch

Maria Parsons, whose mother, pioneering floral designer Toni, was Forés’ mentor, was never a fan of crab fat. But upon tasting the creamy aligue pasta, Maria was hooked.

These pasta dishes are part of the menu of Lanai boutique’s rebranded restaurant, Lanai x M.

This casual lifestyle concept store at Karrivin Plaza in Makati has been famous for unique Filipino artisanal products, home and fashion accessories from around the world, and exquisite floral arrangements.

The bistro, under its former chef Marc Licaros, has made Lanai a venue of intimate special events.

Licaros has since shifted gears. Thus, business partners Bianca, Natalia and Maria tapped their family friend, Forés, whose commissary was only a few meters away.

The bistro has been attracting shoppers and Beacon moms. “The menu has a lot of girl food, catering to shoppers who like a nice environment. We keep the food simple and light,” says Forés.

“The menu represents some of the best of the world and the Philippines,” she says. “It becomes appealing when you have diverse choices—which are great for a retail café.”

Forés injects local ingredients which has become a selling point to consumers looking for more genuine and organic experiences from a restaurant.

“It celebrates the fact that Lanai has also to do with flowers and live plants,” says Forés. “We’re bringing back things from the past, like the penne chorizo which has been upgraded with more parmesan in the creamy sauce and parmesan shavings.”

Refreshing watermelon cubetti or cubes are wrapped with prosciutto, Italian dry cured ham, and crowned with a cloud of cambozola and cream.

“These iconic passarounds have been served only in our catering and guests are familiar with them,” says Fores. “If they have cravings for these, they can finally have them at Lanai… We are making the menu ladies-who-lunch friendly.”

Unique to Lanai are the tartines, artisanal breads with toppings. Fores says she likes serving tartines “because Lanai has an elegant French vibe to it.”

These open-faced sandwiches use sourdough bread prepared at the commissary. Its crunchy crust and subtle tartness is typical of country breads in Italy.

Aside from mushrooms and tuna variants, the richest topping is fresh burrata—creamier than mozzarella, which is flown in fresh from Casa del Formaggio in Bacolod. The sweetness of the burrata is balanced by the saltiness of the anchovy paste and the bite of the baby arugula.

“When you slice the burrata, the cream oozes,” says Forés. “The producers use cows from Negros that have been crossbred with cows from Italy. The fat content is therefore higher.”

For a café of sorts, there’s good hot food. The familiar squash soup with smoked bacon has been a hit at Cibo di Marghi Signature Caterer and there are several pasta choices.

The classic Italian pear ravioli with gorgonzola cream is given a local flavor with crumbled biscocho, twice-baked bread sweetened with butter and sugar from Bacolod, instead of almond biscotti, twice-baked biscuits from Florence. Baby broccoli sprouts lend a savory touch that plays against the sweetness of the pear filling.

The straightforward spaghettini highlights the umami of the anchovy olive oil and the sweetness of the chocolitos, oval-shaped tomatoes from Italian seeds that are cultivated in Tagaytay.

Customers looking for comfort food will delight in the grain dishes. The arroz à la cubana is a family recipe using the classic ingredients of ground beef cooked in tomato sauce, raisins, fried egg and saging na saba over rice. The Indonesian beef rendang, yet another classic curry, is a spicier and richer alternative rice dish.

A popular dish since Lanai’s inception, the poke, a Hawaiian fish dish, is seared tuna with a honey soy glaze that sits on a bed of adlai.

The desserts are a classic with a twist. The tiramisu uses Pinoy lady fingers or crisp sponge biscuits soaked in local coffee and mascarpone. The cheesecake is folded in Pecorino, sharp cheese from sheep’s milk, with candied bell peppers.

The Lanai x M menu lets you leave the table feeling refreshed by the depth of flavors and not weighed down with guilt.