The year of Filipiniana: Fad or here to stay? | Inquirer Lifestyle ❮ ❯ 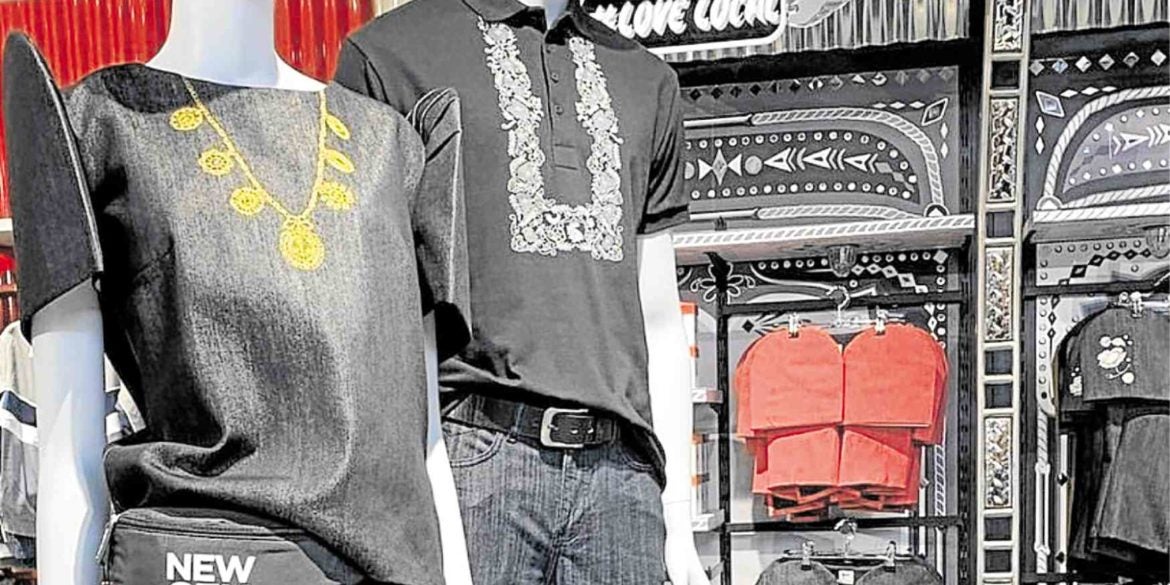 The year of Filipiniana: Fad or here to stay?

It raises more questions: To what extent can one alter Filipiniana? What challenges does one face in translating it to everyday wear?

While it’s admirable of designers and brands to reimagine our traditional dress as we know it, some elements can get lost in translation, thus losing authenticity and oftentimes looking like replicas of one another.

How exactly does one define Filipiniana attire? A history student would look back on the Spanish colonial times, when the barong and baro’t saya were the staple.

During the Japanese occupation, the kimono was adapted to Filipino culture as the lightweight kimona.

A few years ago, Filipiniana attire wasn’t really worn on a daily basis. Because of its price and impracticality, most women of today do not consider it as the go-to garment for every day and even for special occasions—unless the dress code says so.

Our national dress traces its origins to the baro’t saya, a T-shaped top and sarong-style skirt worn by Filipino women during the Spanish regime; the maria clara, a four-piece ensemble with full skirt, blouse, pañuelo (scarf) and tapis (overskirt) named after Maria Clara, Crisostomo Ibarra’s love interest in Dr. Jose Rizal’s “Noli Me Tangere”; and the traje de mestiza, a garment with bell-shaped sleeves, a slimmer skirt and a train. As it shares some of the terno’s key characteristics, the traje de mestiza is considered to be its closest predecessor.

Ben Chan, executive creative director of Bench, founder and chair of Suyen Corp. and one of the pioneers of Ternocon, says: “There are codes to the terno. The national dress underwent continuous evolution for about 100 years from the 1860s until the 1960s.

“By then, the pañuelo and the tapis were removed and all that remained were the butterfly sleeves attached to a western gown. So, to understand the codes of the terno you have to know its entire history. You have to comprehend the forces that shaped the terno into what it is today.

“I think it’s a great educational experience for a young designer to grapple with the codes of the terno early on in his or her own career. By confronting the terno, you are confronting your own identity and cultural authenticity. If you crack the code, if you nail this design challenge, you have found an endless source of inspiration for the rest of your career,” adds Chan.

Recently, we have seen a resurgence of Filipiniana via modern interpretations that more people have been adopting as casual wear in fashion shows, events and fairs, such as Artefino, Katutubo Pop-up Market and MaArte.

Although it is commendable for young designers to reimagine Filipiniana as we know it, fashion industry veterans point out that some elements have been lost in attempts to reinterpret it, thus losing its authenticity.

The challenge for designers and brands today is to create designs that are modern yet true to traditional form. This raises questions: To what extent can one alter Filipiniana? How can one avoid looking like a mere replica of another designer/brand? What challenges does one face in translating Filipiniana to everyday wear?

“First, to bend the rules, one must be very well versed in exactly what those rules are. Generally speaking, we are very much a nation that is still in search of its identity. Therefore, we are inclined to be too literal in what we think of as Filipiniana,” says Mark Lewis Higgins, artist, author and codirector of Slim’s Fashion & Arts school.

Higgins’ coauthor of the book “Fashionable Filipinas” and artistic director of Ternocon, Gino Gonzales, says: “It’s a very gray area. First of all, Filipiniana is such a loose term. People tend to abuse the word and pass off anything that has the slightest indigenous touch or local design code as Filipiniana. And it’s not just the producers of so-called Filipiniana who are guilty of this. It’s also the people who wear them—us!”

He points out the wearing of “token gestures” in events that call for Filipiniana dress code, which can range from a wooden necklace bought from a tourist souvenir store, the addition of a shawl printed with indigenous motif, or something as ridiculous as a red scarf added on to a white undershirt to connote katipunero.

“It’s quite lazy and unimaginative,” Gonzales adds. “There is always a point when something becomes too indistinguishable after it’s been tampered with or stylized beyond recognition. I guess the guide is . . . Is it still Tagbanua? Is it still Mangyan? Is it still Ifugao? In other words, does it still have the spirit of the works of these indigenous groups?,” says Gonzales.

Chan, however, welcomes Filipiniana in all its various incarnations. He likes the current trend because they are not merely slogans on a T-shirt, but are focused on artisanal, crafted and indigenous weaves which are now quite popular.

He points out that without this renaissance, it is very likely that many aspects of our traditions will die.

“We will not be able to pass on vital skills such as weaving fabric on a hand loom, or knowing how to construct a terno sleeve.

“What’s important is that the new generation is intimate with Filipiniana. It is not just something they see in history books or museums, but in everyday life,” Chan adds.

Higgins observes that a lot needs to evolve in terms of fabrication, execution and design. “Some brands will endure, while others will fall by the wayside, which is the natural course of things. A lot of what I see either in retail stores or popup fairs still look like they belong more to a native crafts shop than a fashionable boutique—they need to cross that barrier somehow.

“My mother (the late Salvacion ‘Slim’ Higgins) was actually very good at this—she was never literal—and as a result, she created some amazing pieces that were very evolved and even iconic. She created Filipiniana all her life, she was always revisiting and reinterpreting it with every passing decade. She would often show me the clothes or the designs and discuss them with me,” he adds.

As with all brands and designers, key to sustaining interest in your brand is constant innovation. “That means going deeper into design codes and pushing them into intelligent and attractive interpretations,” says Gonzales.

He cites Len Cabili’s Filip+Inna as a pioneer of casual Filipiniana that are selling like hot cakes today.

“The natural tendency for the market is to emulate the DNA of the brand. But sometimes, instead of an emulation, we see mere replications,” notes Gonzales.

While business is good for many of the craftsmen who produce the fabrics and weaves for brands and designers, much of the same mentioned by Gonzales might lead to market saturation which can make the interest in Filipiniana a fad.

“I have faith that it will not reach a saturation point. Having Filipiniana in your wardrobe should be as normal as a Japanese person owning a kimono or a Korean owning a hanbok. You can have just one, or you can collect and own a dozen. What matters is that it is part of your fashion vocabulary,” says Chan.

Chan adds that turning our Filipiniana heritage into a lifestyle is the task of our artists, designers and visionaries. He started the “Love Local” and Ternocon movement to stimulate new futures for our national heritage.

“Hopefully we can give birth to this new vision and inspire a brighter future for our culture. After all is said and done, authentic culture is still our best export,” he adds.

Chan and Higgins illustrate the kaftan (which originated in Middle Eastern and African cultures) but are now popular as resortwear; and Shanghai Tang, a brand that sells modern interpretations of Chinese costumes, as examples of clothing that derive inspiration of attire worn from centuries ago, yet look modern and refined.

Like athleisure, Gonzales cites that clothes must be comfortable and stylish enough to get one through the day for more people to incorporate Filipiniana into their daily wardrobes.

Another factor to add is the garment should be easy to wash, as most fabrics like piña and jusi are not washing machine-friendly.

Filipiniana for every day

“I think it is very easy to translate the idea of Filipiniana into everyday clothing—the structures are simple enough,” says Higgins. “From the baro, to the tapis, the kimona and remember—one characteristic of native or indigenous Asian clothing is that it tends to be more two-dimensional in construction than three. Very easy for production. The only garment that will remain as formal or ceremonial wear will be the terno. To this day, there has been no real commercial way to produce the sleeve. And I believe that it is important not to evolve the sleeve any further, otherwise it will no longer be a terno.”

Filipiniana still has a long way to go before it can be established as a popular form of dress, let alone one that is ideal for daily use, but given the talented minds of today’s fashion industry, and people’s increased awareness in our national dress, modern Filipiniana will not be mere flash in the pan.