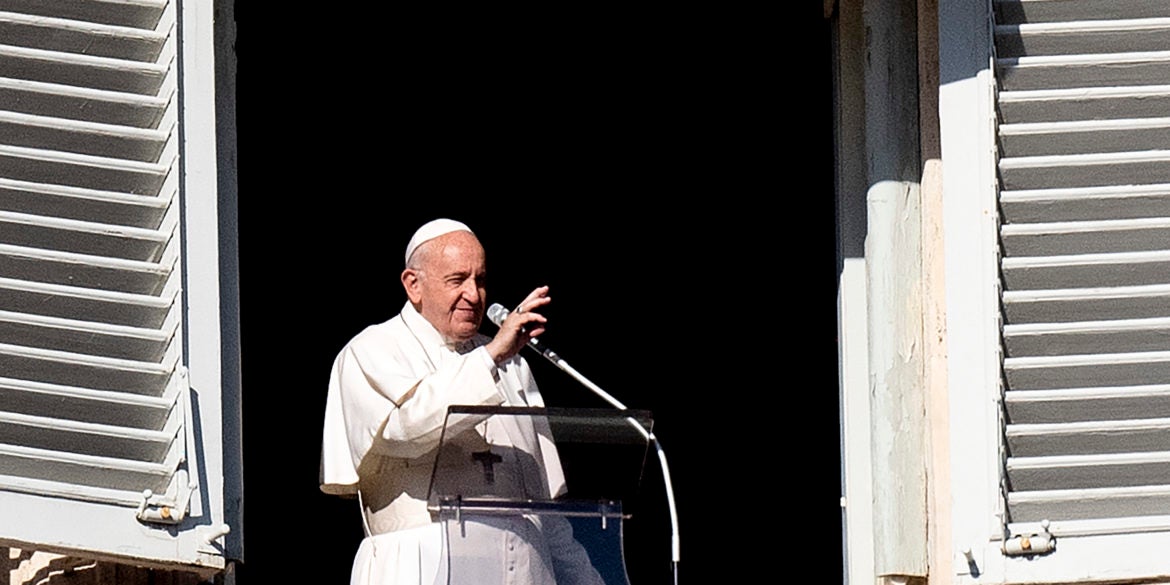 Pope Francis delivers his blessing to the faithful during the Angelus prayer, on December 26, 2019, at St. Peter's square in the Vatican. (Photo by Tiziana FABI / AFP)

Christmas was celebrated all around the world on Wednesday, with Pope Francis appealing for peace in many of the world’s hotspots while festivities were muted for Filipinos battered by a typhoon, as well as in strike-bound France.

“May Christ bring his light to the many children suffering from war and conflicts in the Middle East and in various countries of the world,” Francis said in his traditional Christmas message at the Vatican, singling out the crises in Venezuela and Lebanon, as well as armed conflicts ravaging many African countries.

For her part, Britain’s Queen Elizabeth II used her Christmas Day message to pay tribute to young environmental campaigners who were inspired to global action by Swedish teen Greta Thunberg.

She also described 2019 as “quite bumpy” after a year of crises in the royal family. The queen attended the annual Christmas Day service in Sandringham without her ailing husband Prince Philip, 98, who was released from hospital after a four-night stay for an unspecified illness.

But she was accompanied by Prince Andrew, her scandal-plagued second son, whose disastrous attempts to distance himself from American convicted paedophile Jeffrey Epstein’s victims have backfired. The prince gave up his public duties last month.

Earlier Wednesday, Pope Francis and the Archbishop of Canterbury Justin Welby sent wishes of “peace and prosperity” to South Sudan as negotiations faltered between the African country’s government and rebels.

The spiritual leaders of more than 1.3 billion Christians said they were praying “for a renewed commitment to the path of reconciliation and fraternity” in the world’s newest nation.

In France, Christmas was also a gloomy affair as a crippling transport strike against pension reform was set to enter its fourth week, ruining the plans of many to gather with family and friends.

Things were more upbeat in Spain, where nearly 300 people, some in Santa Claus, Darth Vader or clown costumes, dived into the frigid waters of Barcelona’s port for a traditional Christmas swim.

Meanwhile, US President Donald Trump and his wife Melania sent their “warmest greetings” to Christmas revellers around the world.

“While the challenges that face our country are great, the bonds that unite us as Americans are much stronger,” the message read. “Together, we must strive to foster a culture of deeper understanding and respect.”

The white-bearded man robbed the bank in Colorado Springs on Monday, then threw the stolen cash in the air for people to grab, US media reported.

“He started throwing money out of the bag and then said, ‘Merry Christmas!’,” witness Dion Pascale told local media. The suspect was later arrested.

In the biblical town of Bethlehem on Tuesday, a few hundred worshippers gathered in the church on the site of Jesus’s birth for midnight mass, attended by Palestinian president Mahmud Abbas.

This year, celebrations were bolstered by the return of a wooden relic believed to be from Jesus’s manger.

Sent as a gift to Pope Theodore I in 640, the piece had been in Europe for more than 1,300 years before being returned last month.

Hong Kong’s Christmas celebrations were marred by sporadic clashes between police and pro-democracy activists as the city’s pro-Beijing leader said the festive season was being “ruined” by demonstrators.

Tuesday night, Paris’s Notre Dame Cathedral, ravaged by fire in April, was unable to hold its traditional Christmas Eve mass for the first time in more than 200 years, with the faithful gathering at other nearby churches instead.

After another midnight mass in France, 21 worshippers were hospitalised with carbon monoxide poisoning possibly caused by a faulty gas heater.

Emergency personnel were sent to the church in the Oise department in the north of the country after several people complained of headaches during the service.

Cover image: Pope Francis delivers his blessing to the faithful during the Angelus prayer, on December 26, 2019, at St. Peter’s square in the Vatican. (Photo by Tiziana Fabi  / AFP)