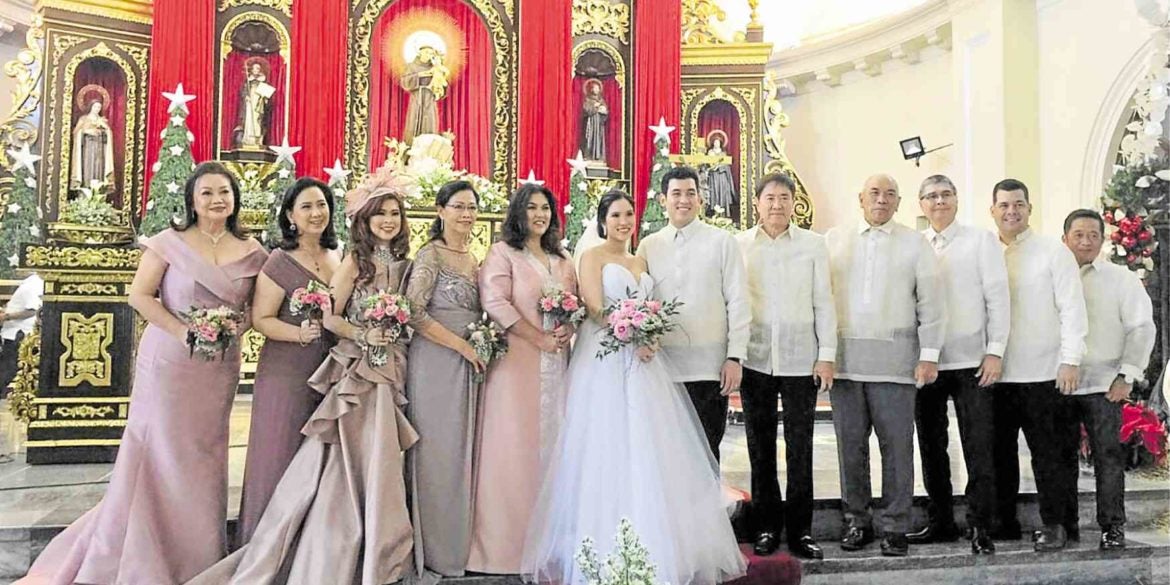 The year of family weddings

Love ruled 2019. Highlighted by our silver wedding anniversary last June 24, the year had many other weddings that made it so memorable and romantic.

Celebrating 25 years of wedded bliss with my hubby Dennis was more special because everyone got into the merriment by wearing colorful costumes to follow the African theme.

With the stunning Santuario de San Antonio church décor by Robert Blancaflor, incredibly beautiful reception setup by Gideon Hermosa, and vibrantly festive outdoor setup by Cyndi Fernandez of Moss Manila, #DandTLove25 will always be one of the most spectacular theme anniversary weddings in my book!

Videographer Ian Cruz said that our same-day edit (SDE) of the event drew over six million views. The video included the wedding invitation by Norman and Mye Cruz of Adworks, and centered on the touching homily of officiating priest Fr. Tito Caluag. Watching the video made me teary eyed.

In the same church two months later, on Aug. 21, I attended the wedding of my niece, lawyer Maiqui Laurel, to businessman Ayo Camara.

It started the wedding ball rolling—three more cousins got married over the next four months!

Parents Juanmi and Queenie Laurel and Leo and Dimpy Camara were overjoyed to have their families united.

The artistic talents of the Laurel clan were conspicuous, especially fashion designer Rajo Laurel’s creations for the bride, groom and entourage, while the beautiful singing voices of Juanmi, Jaymi, Cocoy and Franco serenaded the guests in Blue Leaf Filipinas.

The whole #MnADealOfTheYear celebration showed the importance of family to the couple. The desserts and wedding cake were done by Ayo’s mom, who runs Dimpy’s Kitchen, and Maiqui’s brother sang during the dances. The couple grew several of the plants used in the centerpieces, and handmade their giveaways of cheese boards made from trees from the groom’s family farm.

It was wonderful to see wedding planners Bridesmaids & Co. in action. Twenty-five years ago, our own wedding was one of the first ones they organized.

Two weeks later, there was another wedding in the family. To celebrate the marriage of Isabel Palabyab to my nephew Christopher Imperial, 140 close family and friends flew to Malaga, Spain, for an intimate, three-day affair that was filled with love and happiness.

The festivities started with a 7-kilometer hike at El Caminito del Rey during the day, followed by the bride’s despedida de soltera in the evening at Los Patios de Beatas in Malaga’s historical center.

The next day, an all-white sunset cocktail and dinner party was held at the Real Club Mediterraneo, where a special dance performance surprised the couple.

On Sept. 3, the wedding ceremony was officiated by Fr. Danilo Carolino at the Paroquia San Miguel de Miramar and the reception followed at the Hotel Castillo de Santa Catalina.

Sitting on top of a hill, the hotel offered the best views of the city and the sea. Everything looked magical, but most unforgettable were the heartfelt and humorous speeches, spread out through all events. Ian Cruz Films once again presented the SDE of #PeeperIsaKeeper.

Family weddings are extra special when Dennis and I are among the ninong and ninang. This December, we drove up to Baguio for the wedding of our nephew Jay Laurel and Kyla Olives on Dec. 16.

This couple always had the greatest love for Baguio. So, when they decided #KyJayMayForever after their 11-year relationship, they chose the country’s summer capital for their destination wedding.

The moment they saw the Alphaland Baguio Mountain Lodges, they fell in love with the view and knew that this was exactly where they wanted to get married. It was the perfect marriage of Baguio charm and the Cordillera mountain range.

Sarah Bulahan aka Sabu sang as the bride walked down the aisle. The reception party at the Baguio Country Club’s Infinity Garden was styled by Pat Bernardo of Thirty One Events. The vibe was classic, understated with unique personal touches.

Attire for the guests was chic with hints of Filipiniana while the men wore barong. The bridesmaids’ gowns were designed by the talented Franko Barrio, while the gown of Jay’s mom Crispy was designed by cousin Rajo Laurel.

The program was hosted by close friend Ria Atayde, along with the brothers of the groom, Matt, Carly and Dan. Ninang Sea Princess and close friend Bob Santiago chose couple games for the guests.

The wedding cake was a three-layer Burnt Basque Cheesecake by Cecily Mabasa of The Barn PH, also the venue for the despedida de soltera.

The Edralins, a classic rock band from Baguio, performed Beatles songs. There were also song numbers from Hannah Romawac-Olives of Session Road, and Franco and Ayen Laurel.

DJ Myless Tan kept the party going until the wee hours. This was definitely the best day of the couple’s lives.

Less than a week after, the Barandiaran-Fong nuptial was a touching event, especially the part when Sander Fong, the father of the bride, walked his pretty daughter Aiyanna toward the altar of San Antonio Church. It was a lovely scene to witness, a joyful occasion after Sander had a terrible horseback accident 17 years ago.

The Dec. 19 wedding of my nephew and inaanak Boo Laurel Barandiaran and Aiyanna Fong was officiated by Msgr. Manny Gabriel. Although the couple had only a few months to prepare, things came out perfect because #YannaBeMyBoo.

The reception at the Peninsula’s Rigodon Ballroom was jam-packed with guests who all wanted to be part of the memorable occasion. Tears flowed at the first father-and-daughter dance and at the emotional speech of Yanna’s lovely mom, Alice E. Fong.

May 2020 be equally filled with love and happiness for all!