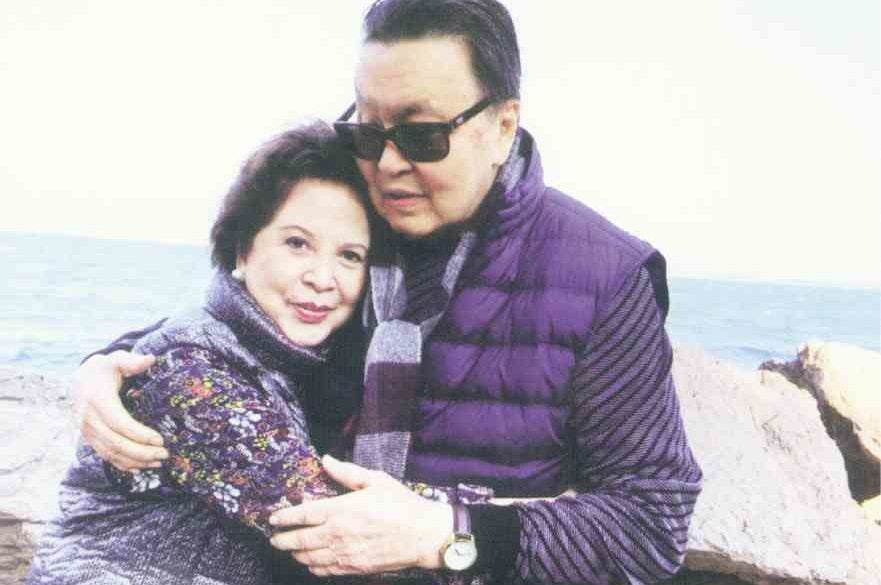 ‘Giving Back’: Wife shares a tycoon’s life with Alzheimer’s

Celebrating their 60th wedding anniversary, Menchu Concepcion recounts a life so blessed, a family moving as one in facing a most daunting challenge

Last Nov. 21, when Ronnie and Menchu Concepcion celebrated their 60th wedding anniversary in the new San Pedro Calungsod Parish in Antipolo, the milestone was like no other, not only because it was their 60th, but perhaps more so because the couple renewed their vows under the most trying condition. Mr. Concepcion is suffering from Alzheimer’s, and his wife not only helps him cope with it, along with the rest of the family; she has also written a journal to share the journey.

Not only is that an act of love, it’s also an act of courage. Even in this day and age, it’s not easy to admit to an ailment which, in many families, is better kept in the privacy of home. It must not have been easy to talk about the vulnerabilities dealt by old age and time, especially because Raul “Ronnie” Concepcion is a leading industrialist, the second generation of a clan that built Concepcion Industries, and like his twin brother, Jose or “Joecon,” is a nationalist who went beyond the confines of industry and business to get involved in Philippine contemporary history.

After growing a manufacturing empire, Ronnie Concepcion went deep into the advocacy of consumer rights and would even place full-page ads in the broadsheets to promote it or to comment on pressing national issues.

Ronnie and Joe Concepcion belonged to the old generation of businessmen whose vision was to build a country for Filipinos, first and foremost.

Today what remains of that generation is living with both the wisdom and cruelty of old age. In Ronnie’s case, it is Alzheimer’s, and Menchu and his family chose to share the ordeal in detail, and how it has strengthened the bond that holds the family together from day to day.

Menchu titled her journal “Giving Back”—a well-written narrative that touches you with its candor and clarity. It is stirring because it is Menchu’s voice, unembellished, unfiltered and honest, as she recounts the time Ronnie was diagnosed with Alzheimer’s, the telltale signs leading to it, and how she and the family tried to accept that the man, who once wielded full control over the family, indeed of life, has become fully dependent on their care.

Menchu wrote in the Foreword:

“‘Giving Back’ is my own personal way of thanking the Lord for a journey spanning eight decades. It is a narrative of a life well lived and choices well made, and a childhood and growing-up years of relative comfort. ‘Giving Back’ is also a celebration of having made the perfect choice for a life partner, of bearing children who have grown to be responsible and responsive…

“More than the triumphs and the joys, the ups and downs of a blessed marriage now on its 60th year, I would like to share the most daunting challenge in this my personal journey…. The anguish and the unbending love needed in caring for a once seemingly indestructible life partner, now diminished and debilitated by a dreaded illness, assuaged and strengthened only by the endless outpouring of love and support given by the family to Ronnie and me.

“It was almost eight years ago that my husband, Ronnie, was diagnosed with Alzheimer’s and Parkinson’s disease. I could not have known then, much more explain, what Alzheimer’s disease was and how it affected a person stricken with it, until now, that I am living with one. I watched the disease progress and have valiantly coped with circumstances and conditions that change every day.”

Then Menchu comes to terms with her role now:

“I am the main caregiver of my husband, a responsibility that I would not want to delegate to anyone else. It has taken me some time to adapt and adjust to our new situation. I am aware that the journey is long and difficult. Through all these years, I have learned many lessons, and am learning new ones. The biggest and most important is ACCEPTANCE.” (All caps in the book—Ed)

She recounts the signs. One of them, on a vacation in San Francisco, California, Ronnie and she went shopping in his favorite office supply store, and as he used to, he filled a big bag with supplies, from sign pens to stick-ons. Back in the lobby of their condominium, she asked him to go up ahead because she still had to go to the grocery.

Later in their apartment, she found Ronnie seated before the TV. “I asked him where he placed the Office Depot bag, he said nothing and just continued watching TV. The bag was nowhere to be found, so I gave it up for lost.” (A fellow resident later found the bag outside his apartment.)

Menchu continues recounting the signs: “Back home in the Philippines, we noticed personality and behavioral changes in Ronnie. Very conspicuous were fits of bad temper, angry outbursts, forgetfulness, the loss of certain skills and changes in judgment. Gone was his erstwhile ability to multi-task and multi-think. But what was most alarming was that he was repeating things again and again.”

Menchu concludes: “These incidents I just related were some of the reasons that made me doubt that these were just ‘senior moments’ and part of aging, and therefore, needed more professional attention.”

When the diagnosis did come, the family moved as one. Whether on vacation or in daily affairs, Menchu or any one of his five children was always by his side. Indeed, coping with illness, especially Alzheimer’s, in any family, starts by addressing a basic need: The afflicted is not left alone by his or her loved ones, especially not in strange surroundings.

Very touching was the exchange of notes and email within the family, after the diagnosis. Their only daughter, Rica, who was with her parents in San Francisco, wrote: “… We just have to be patient, patient, patient.

“One thing so nice and of which I was happy about was that Dad did not get mad at all and allowed Mom and me to fix all his medicines. Earlier, he would fix his medicines like he was playing a game of sungka. The dining table is a mess. He has four pairs of scissors, four letter openers, three staple removers, two rolls of scotch tape, 100 rubber bands and paper clips, etc., and yet he always looks for them. Mom used to be off limits to his table, but now he allowed Mom to touch and fix everything…”

Son Ton wrote his mom Menchu: “Nothing is perfect in life. I believe God would not give you a burden that you could not bear. No one else is tough enough to handle these problems than you. All these challenges serve to make us better. Challenges make us stronger and cleanse us. Like waves crashing the shore, the finest white sand comes from the strongest wave. As strange as it seems, all these problems will make our family stronger and closer and more united…

“Happiness really comes from within and not from outside.”

From San Francisco at that time, Menchu replied to the email of the children, assuring them that she was strong and not to worry. But, she writes in “Giving Back”—“I had to rush to the bathroom, but the bathtub was not big enough to hold all my tears. But a good cry certainly did help!”

The journal details how Ronnie is not left alone, how the family adjusts to his medications, but also how he was at his prime:

“Staying true to his father’s vision, Ronnie would turn CII (Concepcion Industries Inc.) into a shining example that ‘Yes the Filipino can!’ One of Ronnie’s first moves was to raise the quality standards of CII products… He was staunchly cautious and conservative in running the business. He adopted austerity measures that would enhance the company’s financial capabilities. He believed that a good credit standing was essential…

“He promoted the Buy Philippine Made Movement which sought to foster higher quality standards for products made in the Philippines.”

This, even as Menchu notes how her husband prefers to be “remembered more for my advocacy work rather than my achievements in business.”

In the journal she and the children are candid enough to cite how even the couple’s social life predictably has changed from being the center of a social gathering. She is blunt about it, touchingly human: “… Now, we have to content ourselves sitting quietly at the end of the table, or in a quiet corner of the room. Ronnie and I were always a standout, now we feel socially isolated. Friends hesitate to spend time with us, worrying about what to say, or what to do. Ronnie, who in his whole life was a very proud person, now has learned to humble himself and just be one among the many. Most of the time, we send our regrets when invited.”

It’s admirable how Menchu and the family could put in words what they’re going through.

As she wrote this journal in preparation for their 60th wedding anniversary last Nov. 21, she reiterates the family’s journey together—five children (Rica, Stephen, Joseph, Patrick, Anthony), with three daughters-in-law, 17 grandchildren, two great-grandchildren—“There is nothing more we can ask for. We are so very blessed.”

Aside from Ronnie’s advocacies, as a way of giving back, the couple have donated their land in Antipolo to the building of a church, San Pedro Calungsod Parish—Sanctuary of Padre Pio, which will also house the diocesan youth center of Antipolo. The Concepcions’ 60th wedding anniversary celebration was the first wedding in the church.

Menchu writes in the journal: “We are blessed that Ronnie is still with us as he turns 88 years old on Dec. 29… These are bonus years indeed. It is good to be with him now that he still has the chance to be happy and be at peace…”

She appreciates the ordinary things about him now.

“Each and every little sign or manifestation of normalcy buoys up my spirits: He can read loud and clear the Anawin Way, a daily liturgical meditation. He is quick to answer simple mathematics quizzes. He can sing his favorite song ‘Que Sera Sera’… He starts talking in fluent Spanish when a mestizo or mestiza is around. He is thrilled and makes yabang when he gives up his wheelchair for me to sit on while he pushes me, or walks beside me.

“Ronnie is now my child, who I will always forgive and love even more each day. I know it is only my love and the love of the family that sustains Ronnie these days. He is now in a journey and he needs a helping hand, AND THAT HAND IS MINE.”