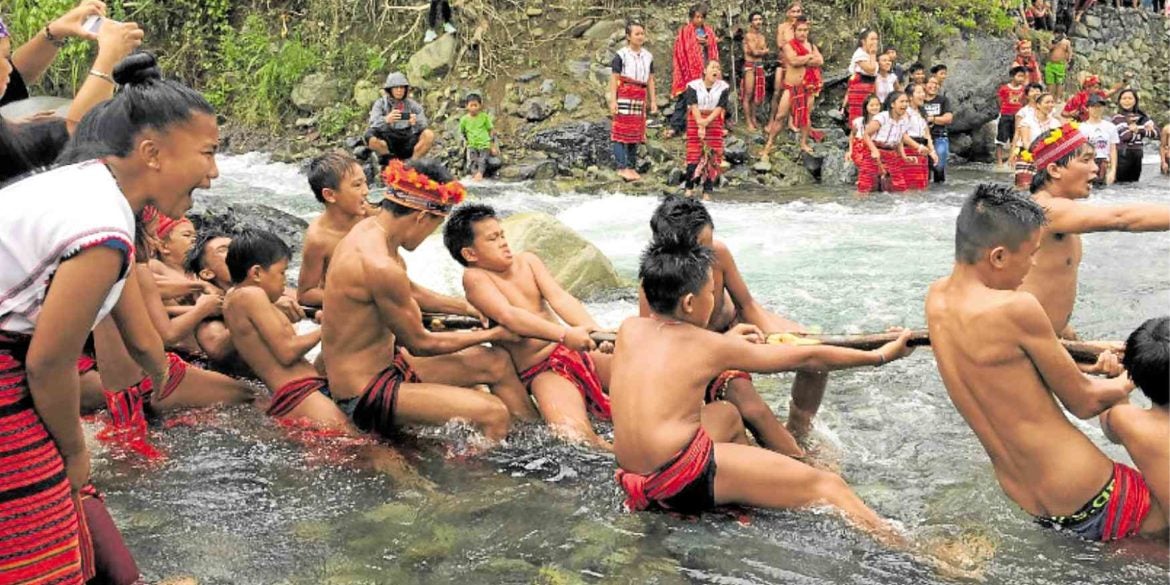 To promote the mutual understanding of the tugging ritual rites between South Korea and the Philippines, intangible cultural heritage experts from the former participated in the recent punnuk, a postharvest ritual in Hapao village, Hungduan.

Punnuk, together with the other tugging rituals and games in Cambodia, Vietnam and South Korea were collectively inscribed in 2015 in the United Nations Educational, Scientific and Cultural Organization (Unesco) Representative List of the Intangible Cultural Heritage of Humanity.

The successful inscription was done through the efforts of Unesco’s International Information and Networking Center for Intangible Cultural Heritage in the Asia-Pacific Region (ICHCAP) based in South Korea.

Part of the 15-man contingent from South Korea headed by ICHCAP head Seonmo Park were farmers that comprised the safeguarding association of the Korean tugging ritual juldarigi from Gijisi, Dangjin City.

The event was purposely held just in time for the annual punnuk ritual at the confluence of the Hapao and the Baang-Nungulunan Rivers. It aimed at promoting cultural and academic exchanges and the raising of awareness for the safeguarding of the tug-of-war rituals in both countries.

It was organized by both ICHCAP and the National Commission for Culture and the Arts (NCCA) and with the support of the Ifugao provincial government, Hungduan local government unit, Dangjin City, and Cultural Heritage Administration of the Republic of Korea.

Included in the momentous event were a workshop on tugging rituals and games; photo exhibit of the tugging rituals of South Korea and Southeast Asia; juldarigi demonstration; and field survey and data collection.

Punnuk is a postharvest ritual involving the villages of Hapao, Baang and Nungulunan (pronounced nunggulunan) in Hungduan wherein it is specifically held where the Hapao and Baang-Nungulunan Rivers meet, the area called hipukana by the locals.

It actually forms part the larger hwah (also huwah, huowah) ritual being held annually during harvest season which falls around June to August.

Aside from punnuk, which is the penultimate ritual, parts of hwah are the baki or the “ritual divination” in which chickens or pig are sacrificed to check for favorable signs in their bile for the punnuk to push through the following day; and the inum or the communal drinking of rice wine.

A mumbaki leads the ritual which is always being hosted by the village’s kadangyan or the affluent family in the community.

In the case of Hungduan, the hwah is always held at the Uyammi family’s abode in the middle of the Hapao Rice Terraces, a Unesco World Heritage site.

On the day of the punnuk, the three different groups composed of men, women and children descend to the hipukana to wrest with each other using the pakid, a sapling of the atoba tree with a hook (natural or carved) at the end used to attached it with the other pakid.

The tugging is normally preceded by banter from both sides.

Each group has its own kina-ag, a figure sometimes human-like and made from rice stalks bounded by a vine called itlig— that will be thrown into the river after the tugging to announce to the residents downstream and to the god Binongbong, who lives at the end of the river, that the punnuk has ended.

The winner is believed to experience good harvest during the next planting season.

During the harvest season, which lasts for a month and a half, the locals do not eat fish and vegetables because these are considered bad luck.

It is likewise important for them to dip any part of their bodies to the river after the punnuk to cleanse them from bad luck.

There are stories that the punnuk was no longer being practiced for a long time before and was only revived 22 years ago, but Monaliza Uyammi Bimuyag, a key member of the kadangyan clarified that they did not miss any year doing the hwah but since there were no participants for the punnuk, the penultimate ritual was not held for quite some time.

Yongho Heo of the Korea National University of the Arts noted that juldarigi is being practiced in 161 agricultural regions, mostly in the southern part of South Korea and being performed in special cases such as drought and epidemics and on traditional festival days and holidays.

It involves three rope types mostly made of straw participated by hundreds of participants.

The huge rope measures about 200 meters and weighs 20 tons.

Yeonmo Park of ICHCAP said the tug-of-war is a universal phenomenon but in Asia. It “is performed either as a prayer for rain or as a sign of good harvest, or to foretell whether the year’s harvest will be good or bad.”

These rituals and games, he said, “have distinctiveness, individuality, and creativity interacted with the climate of environment, making the tug-of-war worth preserving as a common element of intangible cultural heritage of Asia.”

For Hapao village chief Ramon Gayyadang, traditions like punnuk or hwah in general is very significant because it identifies “who you are, what you do, and how you transfer it to the next generation.”