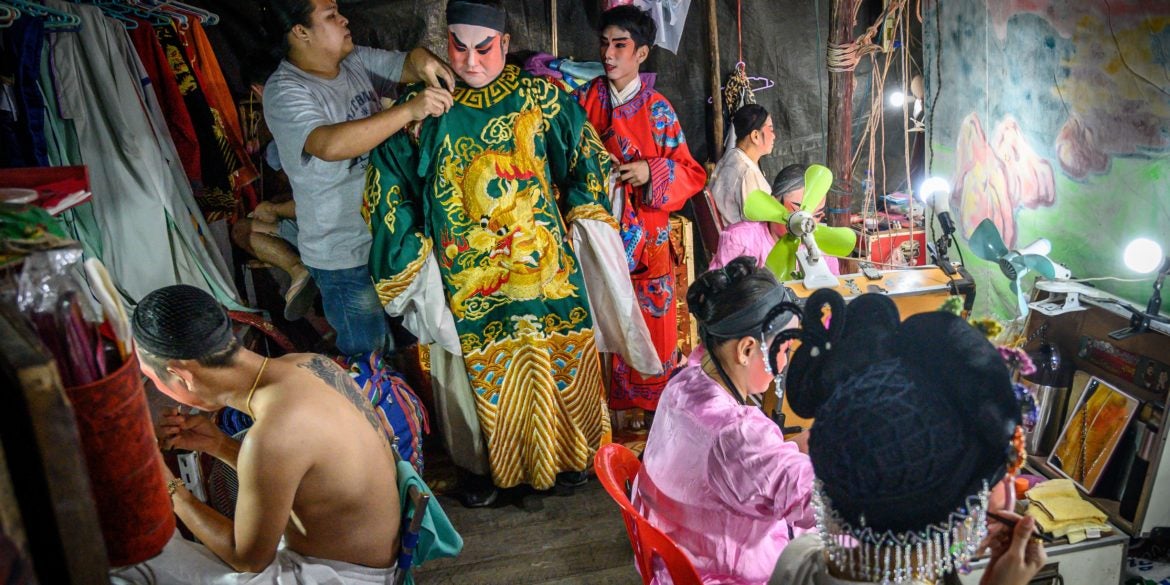 This photograph taken on December 28, 2019 shows actors preparing for a Chinese opera performance by Thailand's Sai Bo Hong troupe on a makeshift stage at a street festival in Bangkok. - An ancient world of swords, warriors and folklore roars to life on the darkened street, offering a momentary escape from the modern-day bustle of Bangkok's unstoppable development. For centuries, troupes like the Sai Bo Hong Chinese opera have performed throughout Thailand, where 14 percent of the population are ethnic Chinese. (Photo by Mladen ANTONOV / AFP) / TO GO WITH Thailand-arts-entertainment

One of Thailand’s last Chinese opera troupes lights up Bangkok

An ancient world of swords, warriors and folklore roars to life on the darkened street, offering a momentary escape from the modern-day bustle of Bangkok’s unstoppable development.

On stage the Sai Bo Hong Chinese opera troupe act out dramatic tales centered around themes of loyalty, honesty and family to the sound of clashing cymbals and flutes.

For centuries, troupes like this have performed throughout Thailand, where 14 percent of the population are ethnic Chinese.

But the number of shows has dwindled in the era of smartphones, cinemas and Netflix, a vanishing art in a city of high-rises and mega-malls.

“Chinese opera in Thailand has seen a sharp drop in terms of both audience attendance and performances,” said one of the costume designers.

When the Thai troupe plays upcountry mostly elderly ethnic Chinese come to see them while in Bangkok it’s a mix of tourists and local residents.

Sai Bo Hong has been around for decades and like other troupes — only about 20 are left in Thailand — normally plays for-hire gigs.

On Saturday they took part in a festival celebrating former King Taksin on the western bank of the Chao Phraya river which cuts through Bangkok.

Taksin ruled in the late 18th century and was believed to have Chinese-Thai heritage.

Cover image: Actors preparing for a Chinese opera performance by Thailand’s Sai Bo Hong troupe on a makeshift stage at a street festival in Bangkok. (Photo by Mladen Antonov / AFP)