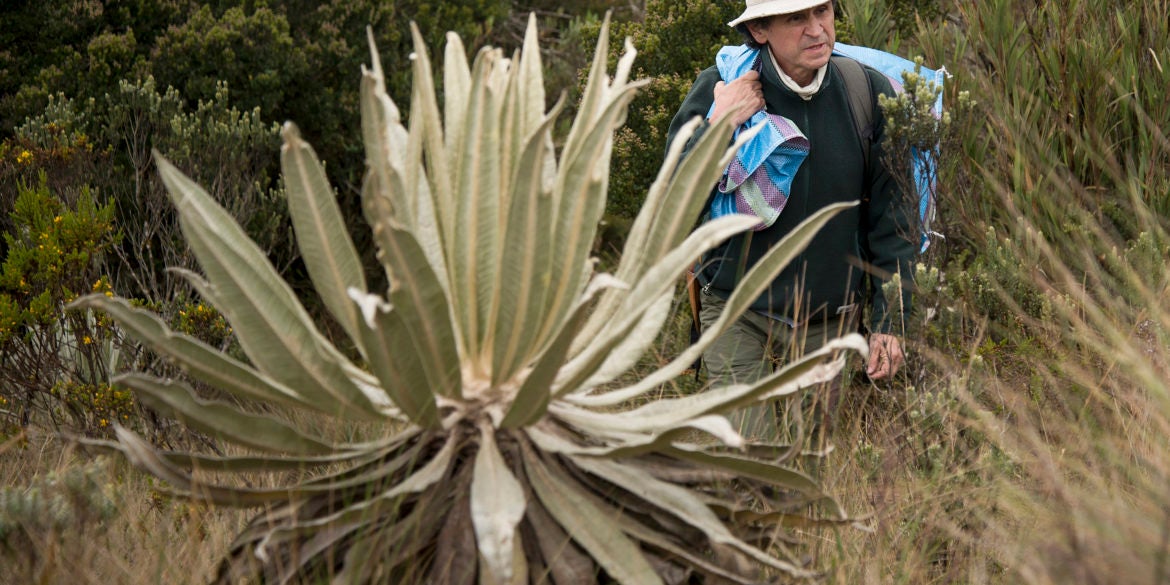 Colombian botanist Julio Betancur walks towards the Chingaza National Natural Park, northeast of Bogota, on September 14, 2019. - For three decades, Betancur has travelled across the country collecting plants, in a crusade to protect thousands of species from deforestation. (Photo by Diana SANCHEZ / AFP)

For the last three decades, botanist Julio Betancur has braved minefields and penetrated deep into jungle territory infested with drug traffickers and armed gangs in a bid to document Colombia’s rich biodiversity.

Colombia is second only to Brazil for its incredible range of fauna and flora. Armed only with a notebook and gardening shears, Betancur has taken considerable risks to collect plant cuttings.

He’s contributed four percent of the 600,000 samples in the University of Colombia’s herbarium.

There have been close calls including “a slightly violent” encounter with a group of drug runners Betancur and his colleagues came across in the jungle.

“Without realizing it, we were putting ourselves in the eye of the storm,” Betancur told AFP.

Fortunately, the drug traffickers accepted their explanations and left them alone.

On another occasion, local peasants freed them from a minefield.

“If it hadn’t been for them, the communities, we wouldn’t be here telling the story,” said Betancur.

The 59-year-old, a biologist, university professor and collector of bromeliads — which include the pineapple, Spanish moss and queen of the Andes — says it’s worth taking the risks so his country can “know about” its biodiversity.

Almost five percent of the 169,000 hectares (650 square miles) of illegal coca plantations are in protected areas.

Illicit gold mining, using techniques that are harmful to the environment, cover 98,000 hectares — an area greater than Berlin.

Since 2010, more than a million hectares of Colombian jungle have been cut down, according to an official report.

Wearing an explorer’s hat and with a rucksack on his back, Betancur forges into the mountainous Chinganza National Park some 40 kilometers (25 miles) from the capital Bogota.

Suddenly, he stops in front of a plant with tiny yellow flowers known as a “chite” in Colombia: a member of the St. John’s-wort family.

He takes a clipping and wraps it in newspaper soaked in alcohol.

Back in the university herbarium, where Betancur works as a curator, he jots down in his notebook the color, size, smell, coordinates and the sample number that betrays his vast body of research: 22,999.

“Every time I take a botanical sample it’s like writing a page in the book of our forests,” he said.

In the future, once the vegetation has disappeared from somewhere, people  “will know what species lived there at a certain time and with that will reconstruct the natural history of this territory.”

In his early expeditions, Betancur traversed Amazonian forests studying species that have since disappeared.

The Alexander von Humbolt Biological Resources Research Institute in Bogota estimates that at least 2,100 plant species are in danger of extinction due to deforestation.

Of the 30,000 plants the institute has documented in Colombia, 26 percent are endemic.

The botanist compares the herbarium to the Great Library of Alexandria in Egypt, one of the most significant libraries of the ancient world.

At Betancur’s apartment in Bogota, he has a large terrace where he looks after his collection of bromeliads.

These plants, with their colorful flowers ranging from red to green, provide a water source for animals during times of drought.

Among them is a species that had never before been documented until Betancur noticed it while out driving.

He spotted it high up in a tree in Bogota’s savannah and climbed up to take some clippings.

“I still don’t know what to call it because I have to baptize it,” said Betancur, one of the Colombians to have named the largest number of plants.