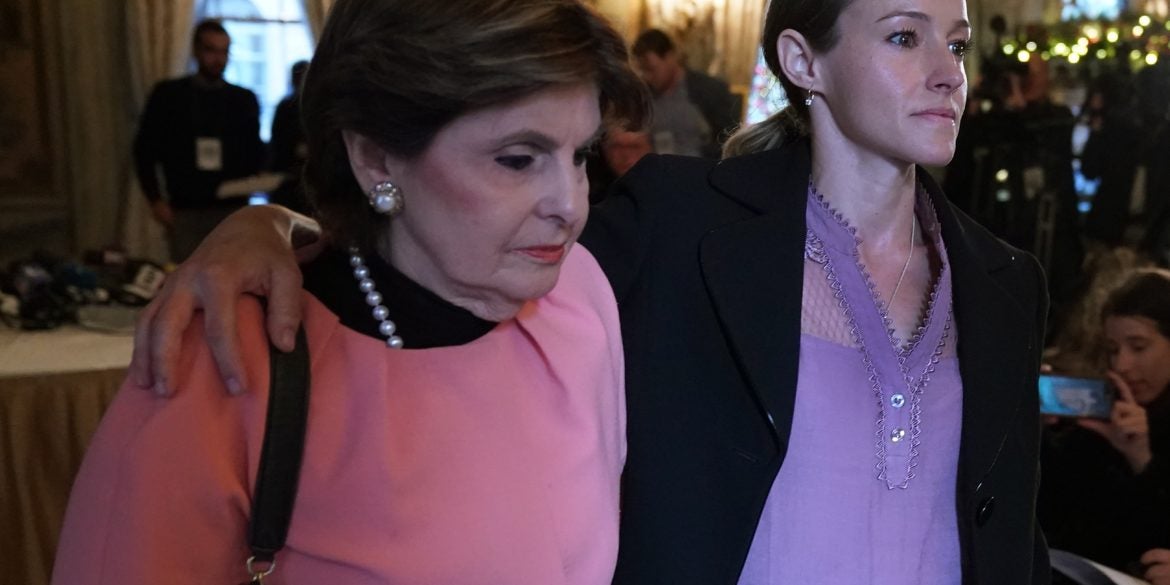 Attorney Gloria Allred (L) and her client Teala Davies, who claims to be a victim of sexual abuse by Jeffrey Epstein when she was a minor, leave after a press conference in New York City on November 21, 2019 to announce filing of a lawsuit against Epstein's estate. (Photo by TIMOTHY A. CLARY / AFP)

Ahead of the start of Harvey Weinstein’s trial Monday, AFP spoke to Gloria Allred, one of America’s best-known lawyers for sexual assault victims, to get her take on the proceedings.

Two of Allred’s clients, former production assistant Mimi Haleyi and “The Sopranos” actress Annabella Sciorra, accuse Weinstein of sexual assault and will be called to testify against him.

Here is a Q&A with the 78-year-old Allred, who has been practicing law for over four decades.

What can Weinstein’s accusers expect?

“Mr. Weinstein has a highly experienced, well-funded, small army of defense lawyers. If convicted he could potentially face a life sentence in prison. This is high stakes.

“They will try to do everything to attack the credibility of the witnesses, their motives. (They will) attack any inconsistencies, any statements they made at a prior time versus what they are saying now.

“If there is any such inconsistency, I would expect a brutal cross-examination. So they are very, very brave to be willing to testify.”

Will the defendant testify?

“Most accused persons who are being prosecuted do not decide to take the witness stand, instead they invoke the Fifth Amendment privilege against self-incrimination.

“I would really be shocked if he did (testify). I don’t think he could withstand any vigorous cross-examination and I have no doubt he would be subjected to that if he decided to testify.”

Do you regret that non-disclosure agreements may have delayed the public airing of Weinstein’s alleged misconduct?

“I do think it’s important for victims to have the option of a confidential settlement because many people who have been raped or sexually assaulted do not perhaps want their families or co-workers to know.

Are you pleased to see some US states scrapping limitation periods for charging sexual assault?

“I don’t think there should be any statute of limitations in any state. After a long battle we were able to change the law in California (and others are following). This is part of the empowerment of women.

“There is still a long way to go for victims, we are not there yet but there is progress and that’s positive.

“A lot of the progress is because a lot of the victims have started to demand that they be treated with respect and dignity and that the accused be made accountable.

“I give credit to the women’s movement, which has been very, very important in all this.”

What about other sex abuse trials you are involved in?

“I also represent accusers of Jeffrey Epstein and accusers of R. Kelly as well. The federal government (which has more means than state prosecutors) is involved (with cases against both.) That is a very important development.”

“If prosecutors conclude they have evidence that there are any co-conspirators, and they have knowingly assisted Mr. Epstein to sex traffic underage girls, then a criminal case may be filed against others, even though Mr. Epstein is deceased.

“We will have to see how that goes.”