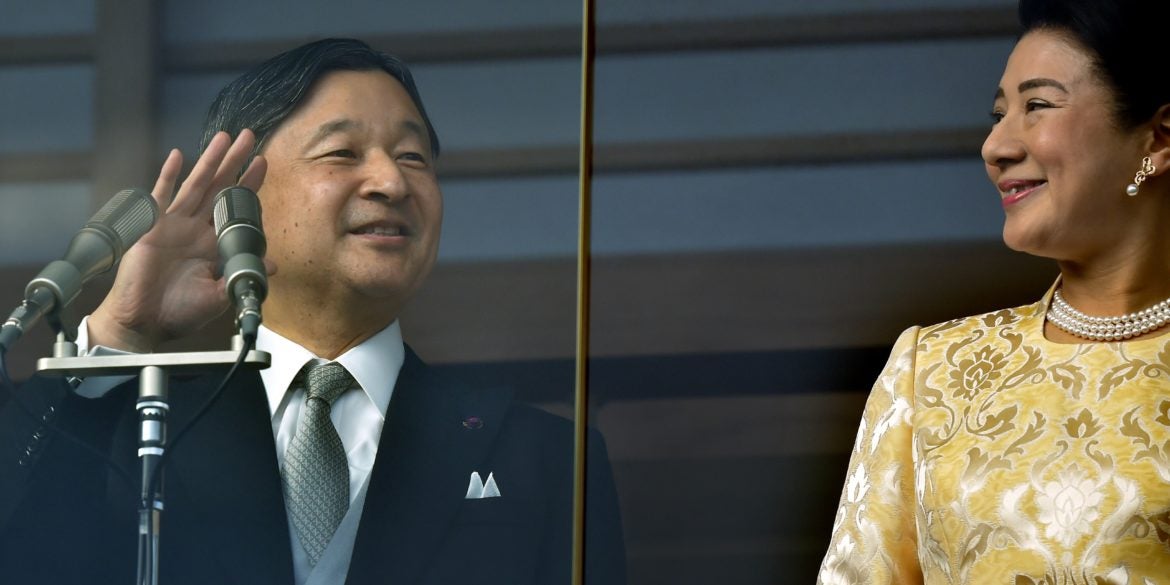 Japan's Emperor Naruhito (L) waves to well-wishers next to Empress Masako during a New Year's greeting ceremony at the Imperial Palace in Tokyo on January 2, 2020. - Japan's Emperor Naruhito delivered his first New Year's address on January 2 since his enthronement last year, expressing his sympathy to survivors of recent natural disasters, including killer Typhoon Hagibis. (Photo by Kazuhiro NOGI / AFP)

Japan’s Naruhito hopes for a year without natural disasters

Japan’s new Emperor Naruhito said Thursday he hoped for a year without natural disasters, delivering his first New Year speech since ascending the Chrysanthemum Throne to tens of thousands of well-wishers.

“I’m glad to celebrate the New Year together with you,” Naruhito told the crowd, many waving Japanese flags and shouting “Banzai”, meaning “long life”.

“On the other hand, I’m worried about many people still living difficult lives because of typhoons and heavy rain last year,” said the 59-year-old emperor, accompanied by Empress Masako.

“I hope this year will be a good and peaceful year without any natural disasters,” he said.

Also attending the traditional New year celebration was Naruhito’s father Akihito, who became the first Japanese monarch to abdicate in around two centuries when he stepped down from the throne on April 30, ending his three-decade reign.

Naruhito formally proclaimed his ascension to the Chrysanthemum Throne in October in front of royals and leaders from around the world.

The central Tokyo palace, surrounded by stone walls and moats, is opened to the public twice a year — on the emperor’s birthday and the second day of New Year — for the royal family to greet well-wishers.

The emperor will appear four more times at the balcony later in the day.

Cover image: Japan’s Emperor Naruhito (L) waves to well-wishers next to Empress Masako during a New Year’s greeting ceremony at the Imperial Palace in Tokyo on January 2, 2020. (Photo by Kazuhiro Nogi / AFP)