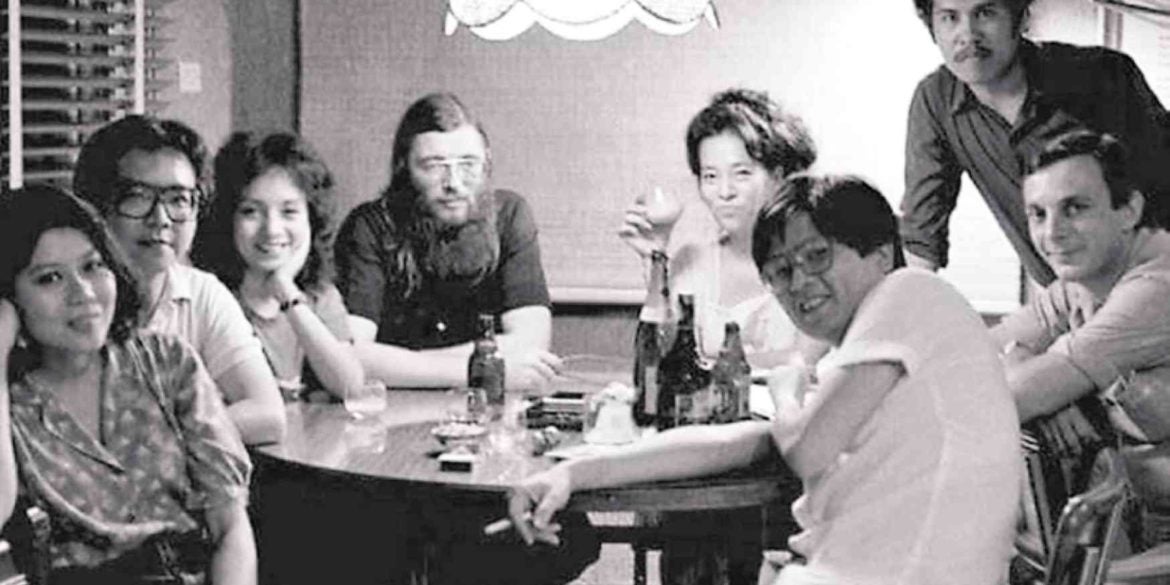 Friends remember the late eminent writer—‘Her ringing laughter is pure love, no judgment and bias or malice—she’s all heart for her country and people’

“Now we could dance again—sailing through a rose window, the colors of time brilliantly staining the white radiance of eternity.”—Sylvia L. Mayuga

Just when ordinary folk like us were preparing our Media Noche to welcome the New Year and a new decade came sobering news that writer Sylvia L. Mayuga had joined eternity. It seemed like her to put a dramatic finis to a full life dedicated to excellence in her craft and fierce love for her country.

But Sylvia, or Ibyang, or Sylvia Morningstar (her other name on Facebook) is a class of her own. For her, nothing less than an exit to be marked red in the calendar.

Rochit Tañedo, a member of Women Writers in Media Now (Women), of which Sylvia was among the originals, posted on Facebook this exchange:

“B: But Sylvia’s another category.

“S: Sylvia has always been her own category. Anything else would not be Sylvia.”

When Women members showed up in force to support journalist Joe Burgos, who was jailed for exposing the fake war medals of Marcos, all wore black tops to signify the death of press freedom. But Sylvia stood out with a fashion statement—she arrived wearing a black dress with a black veil covering her face, so much so she was mistaken for Joe’s grieving wife.

Actor Gigi Dueñas de Beaupre, writing from Guadeloupe, French Indies, let it be known that “Ibyang, my old friend with whom I had some differences, had passed away. Whatever, manash. I was rattled when I heard you were extremely sick. Join ka na sa universe, and deep down, I love you.”

What Gigi recalled most about Sylvia’s habits was her sense of time. “You don’t make an appointment with Ibyang unless you have an eternity before you and a huge overload of patience. And you wouldn’t be surprised if she would call, just before you lose it completely, to say she couldn’t come.”

But people put up with her quirks. As early as her St. Theresa’s College (STC) years, she already cut a memorable figure in the mind of memoirist Cielo Lutz: “Sylvia at age 16 was eager, friendly, open. If she was a puppy, you could see her tail furiously wagging. I loved her, the sophomore group she was drawn to in the social hall of STC loved her. A genius, an endearing oddball, an original human being, full of half-formed thoughts that exploded on paper in an unruly barrage of words—that was Sylvia at STC.”

Personally, I don’t think that nature was ever contained, for like Maria in the musical “The Sound of Music,” she was a “flibbertigibbet, a will o’ the wisp, a clown.”

In the 1980s, she once drove me home from the National Press Club where there was a meeting of activists. After we got past Guadalupe Bridge, I told her to make a slow right turn to Pioneer Street. She did so rapidly from the farthest left lane of Edsa, causing drivers of buses and other vehicles behind us to honk their horns loud.

She spoke boldly, too. At my and my husband Rolly Fernandez’s 25th wedding anniversary, she caused him to blush as she asked him point-blank: “Hinayaan mo si Babeth isulat yung premarital sex niyo?”

For a time, I blamed her for the many visitors crowding Sagada and Mt. Banahaw. She had written so well of those sacred places using that graceful prose of hers in the book, my much underlined “Spy in My Own Country.”

In a private message, Daisy Langenegger, staunch advocate of organic farming, wrote: “We will miss Sylvia’s physical presence. We have fought for our mountains and forests together, having nothing but love in our hearts for this our beloved country and its still coming generations. In the Bolinao people’s fight against the Taiwanese business interest with the backing of misguided people in the government, Sylvia gave me Ceres.

‘I’m in the Banahaw battlefield, Daisy,’ she said. ‘There’s injustice happening here. You stay there, I will give you Ceres.’ (Ceres is the Roman goddess of agriculture, and also refers to the love a mother has for a child.) ‘She will help you.’ We won the Bolinao fight where then President [Fidel] Ramos made the nationwide landmark declaration that all environmentally endangered areas of our country are unexploitable.”

Sharer of energy and light

Daisy continued: “It’s just like Sylvia to disappear gently into the mists. In our long friendship, she just surprised me with her unannounced visits. Strange, she’d find me—I am always around. We’d sit around, relaxed and converse like there were no time intervals between our meetings. In fact, I never feel separated from her…

“Her ringing laughter is pure love, no judgment and bias or malice—she’s all heart for her country and people. Her disapproval of all injustices done and perpetuated puts her in life’s battlefield. A true warrior of the Light, she is now Light.”

Young writer-scholar Nash Tysmans wrote an open note to her Tita Sylvia on FB: “I can’t believe you Frenched on us. One among the lipstick ladies has passed. Do you remember the JoyBus? The trip to Baguio was short with each turn marked by laughter and curiosities. We were off to hear Criselda Yabes speak. I remember you telling me, ‘Don’t let your anger consume you.’ I didn’t understand it then, but this was you dispensing divine wisdom.

“On my birthday, I was moved to tears by the conniving cosmos. You and Tita Gilda (Cordero Fernando) hadn’t spoken for some time, and now the air had no choice but to clear itself, cleansed of human frailties. I didn’t think we wouldn’t see much of each other after that, but life happens. I love all the women you were and cannot process speaking (of you) in the past tense. Guide over us, Mother Morningstar! Love you, love you, love you!”

Fictionist Susan Lara addressed Sylvia in another FB note, wondering “why you’ve been unusually quiet lately. Goodbye, my dear Sylvia. Thank you for the gift of words —mindful, playful, powerful words—and your beautiful soul. Enjoy your reunion with your beloved Puput…”

Actor Joel Saracho recalled on his FB how he and Sylvia last got together in a car with journalist Monica Feria to attend the burial of Burgos. They hadn’t reached the highway yet when Sylvia started rolling a joint. She asked her fellow passengers if it was okay with them.

Writer Nini Gaviola rued: “When I was young I wanted to be her.”

Explaining the photo he took of Sylvia with arms draped around fellow writer Elmer Ordoñez, Graphic editor in chief Joel Pablo Salud quoted her as telling him: “We go way back, Elmer and I. Our little running joke through the decades: He never fails to recite Shakespeare’s ‘Who is Sylvia, what is she/ That all the swains commend her?’ The first time was when José Garcia Villa came home in the ’60s. The last time, Adrian Cristobal was still with us. The evening was almost over when he finally recognized me and did it again, his eyes twinkling, his hearing almost gone. Wouldn’t you be moved, too?”

Many friends agreed that the death of granddaughter Ava or Puput, whom she raised, was what eventually weakened Sylvia. In her “Requiem for Sylvia, Oh Sylvia,” poet Mila D. Aguilar wrote: “I couldn’t bear / To look at her / Last time we met. / Here was my friend, / Crumpled / Beyond repair. / This is how / The years / And the pain / Wear us down…”

But Sylvia must have the last words, and they are: “The only way out of the mess is love, love, love.”