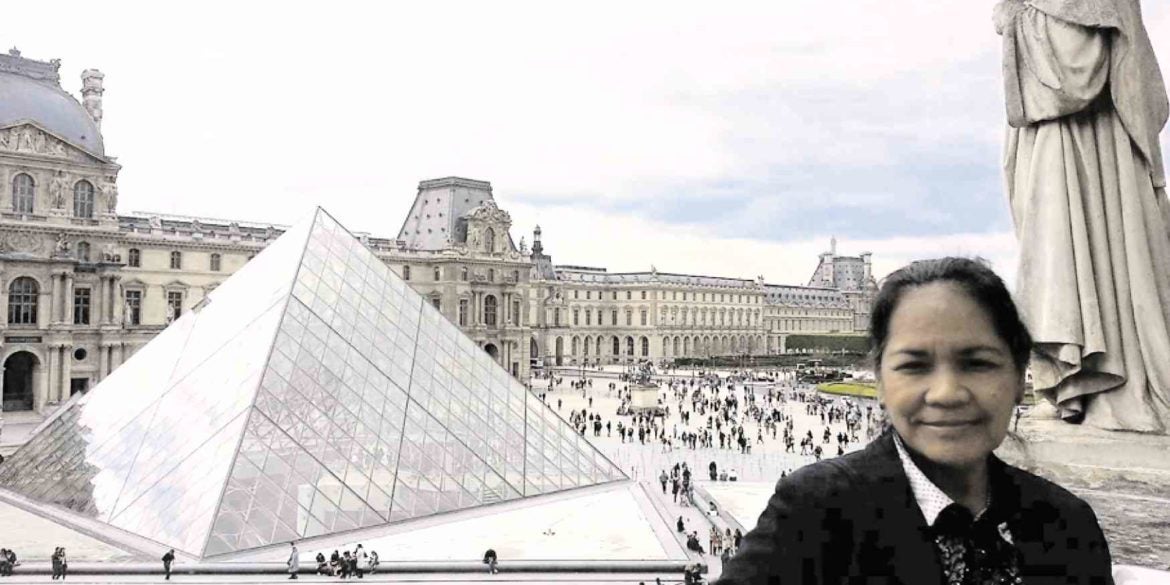 The author in 2016 with the Louvre pyramid in the background —MARIO I. MICLAT

Spaces of genius: Experiencing I. M. Pei in Paris and Beijing

Remembering the renowned architect at two of his masterpieces: the Louvre Pyramid and Fragrant Hill Hotel

A Facebook timeline by a friend caught my attention just before the New Year: “I. M. Pei passes away at 102.” The news, paying tribute to the architect of the Louvre pyramid in Paris and other iconic buildings that dazzle the world, was 7 months old.

As the old year ends, a review of past events is de rigueur, and the news is one of the most significant in the field of architecture and design for 2019.

It’s noteworthy to mention that out of about 80 I. M. Pei projects in Europe, America and Asia, one stands at Bonifacio Global City in Taguig. Essensa Towers is a condominium built in 2000 in association with Pei Partnership Architects and Matrix Design.

With my husband Mario, I saw the glass-and-steel pyramids in the main courtyard of the classical Louvre Museum in Paris in 2016.

We’ve seen one of its architect’s masterpieces in Beijing many years ago, the Fragrant Hill Hotel. This time, we lined up with many other tourists at the Cour Napoleon of the palace museum in Paris, along three pyramids. We then entered the big one.

We’ve been intrigued by its existence ever since we read about the controversial construction that began in 1985. The architect, I. M. Pei (Ieoh Ming Pei), was commissioned by France President Francois Mitterrand to design something that would ease the problems with the Louvre’s original main entrance. It could no longer handle the number of visitors daily.

Pei designed a structure entirely made of glass and metal 21.6 m high, with 34-m sides, and a base surface area of 1,000 sq m. The spacious lobby inside the modern glass pyramid ushered me and my husband into the classical main Louvre buildings.

The pyramid became very controversial, however, when it was inaugurated in 1989. Pei’s unorthodox design was greeted with howls of protest. Critics denounced it as an affront to the Renaissance aesthetics that the Louvre represents.

The French daily Le Monde’s architecture critic called the structure “a house of the dead” and said Pei was treating the courtyard of the Louvre “like an annex of Disneyland.”

Dubbed the “Battle of the Pyramid,” Pei and Mitterrand were severely chastised, with one 1985 New York Times story rounding up the criticisms: The pyramid was “an architectural joke, an eyesore, an anachronistic intrusion of Egyptian death symbolism in the middle of Paris, and a megalomaniacal folly imposed by Mr. Mitterrand.”

It also didn’t help that the French president chose an American, without competition, to design the structure.

Over the years, however, the Pyramid came to grow on France. For design historian Mark Pimlott, “I. M. Pei’s plan distributes people effectively from the central concourse to myriad destinations within its vast subterranean network… the architectonic framework evokes, at gigantic scale, an ancient atrium of a Pompeiian villa; … the busy movement of people from all directions suggests the concourses of rail termini or international airports.”

Renowned for his emphasis on precision geometry, plain surfaces and natural light, Pei once said: “If there’s one thing I didn’t do wrong, it’s the Louvre.”

When news of his death in New York broke, the Louvre tweeted: “For 30 years you have infused the Louvre with audacity and modernity. Your entrance to the Louvre has dazzled the world and evolved into an icon as famous as the Mona Lisa.”

Pei was born in Guangzhou in 1917. The son of a prominent banker, he was raised in Hong Kong and Shanghai and moved to the United States at the age of 18 to study at the University of Pennsylvania, Massachusetts Institute of Technology and the Harvard Graduate School of Design.

He worked as a research scientist for the United States government during World War II, went on to work as an architect, and founded his own firm in 1955.

One of the 20th century’s most prolific architects, his designs could be found across North America, Europe and Asia. He designed John F. Kennedy Library in Boston, the East Building of the National Gallery of Art, the Chinese Embassy complex in Washington, the Rock and Roll Hall of Fame and Museum in Ohio, and Dallas City Hall.

Inspired by bamboo shoots, he designed the Bank of China Tower in Hong Kong’s Victoria Harbor in the erstwhile British colony. It was completed in 1990 and was adjudged the tallest building in Asia that year. His son, Sandi Pei, said that in designing the 70-story edifice, he and his father had taken the art of feng shui into consideration so it would have a “comfortable relationship” with the neighboring structures.

Pei also designed the Macao Science Center which has become one of the city’s major landmarks.

After winning the Pritzker Prize, the Nobel Prize of architecture, Pei continued working well into his old age and finished his last cultural building, the Museum of Islamic Art in Doha, Qatar, in 2008. It is an architectural gem said to represent Islamic art from three continents through 1,400 years.

My husband and I got to know about Pei when we visited Fragrant Hill Hotel in Beijing, where we lived for 15 years since 1971.

Pei led a delegation of the American Institute of Architects to China in 1974, his first visit since he left in 1935. China was then just starting to reopen to the world following Mao Zedong’s disastrous Cultural Revolution.

He was being asked to design a high-rise hotel in the heart of Beijing. He didn’t find it appropriate to have such a structure looming over the ancient Forbidden City. He was then offered to explore a site 25 km outside the city, Fragrant Hill, which used to be the emperors’ hunting grounds.

As a striking departure from his precise and concrete geometries and glass-and-metal forms, Pei opted for “culturally rooted architecture” reminiscent of traditional Chinese courtyards. He followed the contours of the hill, preserving existing trees, including two 800-year-old gingkos.

He said, “A Chinese garden is like a maze. You never see clear or straight to the end, never apprehend the whole. It’s a matter of scale, of multiple vanishing points, and also of surprise—the delight of the unexpected.”

He was delighted when massive rocks were hauled from the Stone Forest of Yunnan, some 250 km south. The hotel was inaugurated in 1982 with guests including Jacqueline Kennedy Onassis, for whom Pei had earlier designed the John F. Kennedy Presidential Library in Boston.

“Designing the Fragrant Hill Hotel was the most tortuous thing I’ve ever done because I had to deal with a system I don’t understand,” Pei told the New York Times.

His persistence paid off, however. The architect, who has become a legend in his time, said: “Success is a collection of problems solved.”