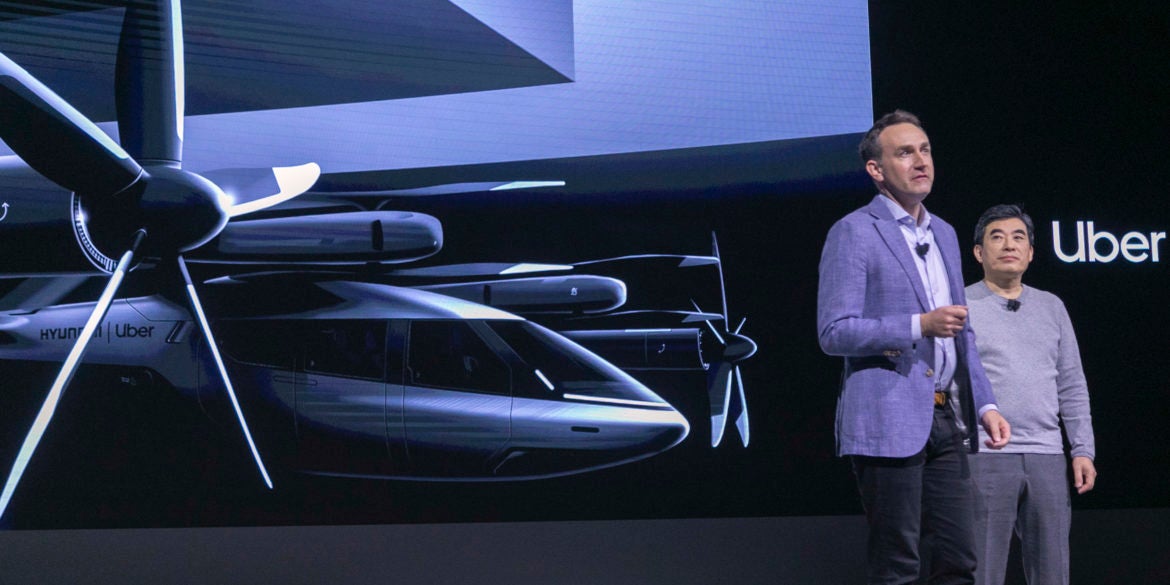 Eric Allison (L), Head of Uber Elevate, and Jaiwon Shin, Head of Urban Air Mobility at Hyundai, talk about the S-A1 electric vertical takeoff and landing (eVTOL) aircraft at the Hundai news event where Hyundai announced it's partnership with Uber to create an air taxi network, during the 2020 Consumer Electronics Show (CES) in Las Vegas, Nevada, on January 6, 2020. - CES is one of the largest tech shows on the planet, showcasing more than 4,500 exhibiting companies representing the entire consumer technology ecosystem. (Photo by DAVID MCNEW / AFP)

The South Korean manufacturer said it would produce the four-passenger electric “vertical take-off and landing vehicles” at “automotive scale,” without offering details.

The deal announced at the Consumer Electronics Show in Las Vegas could help Uber, which is working with other aircraft manufacturers, to achieve its goal of deploying air taxi service in a handful of cities by 2023.

“We know how to mass produce high quality vehicles,” Shin told a news conference at CES.

He said he expected the partnership to allow for the short-range air taxis to be “affordable for everyone.”

Eric Allison, head of Uber Elevate, appeared at the CES event with Hyundai to discuss the partnership.

“By taking transportation out of the two dimensional grid on the ground and moving it into the sky, we can offer significant time savings to our riders,” Allison said.

He said that because of its other app-based transport options, “only Uber can seamlessly connect riders from cars, trains and even bikes to aircraft.”

Uber has announced it had selected Melbourne to join Dallas and Los Angeles in becoming the first cities to offer Uber Air flights, with the goal of beginning demonstrator flights in 2020 and commercial operations in 2023.

Hyundai is using CES to show the S-A1 model aircraft with a cruising speed up to 180 miles (290 km) per hour.

The aircraft utilizes “distributed electric propulsion,” designed with multiple rotors that can keep it in the air if one of them fails.

The smaller rotors also help reduce noise, which the companies said is important to cities.

The Hyundai vehicle will be piloted initially but over time will become autonomous, the company said.