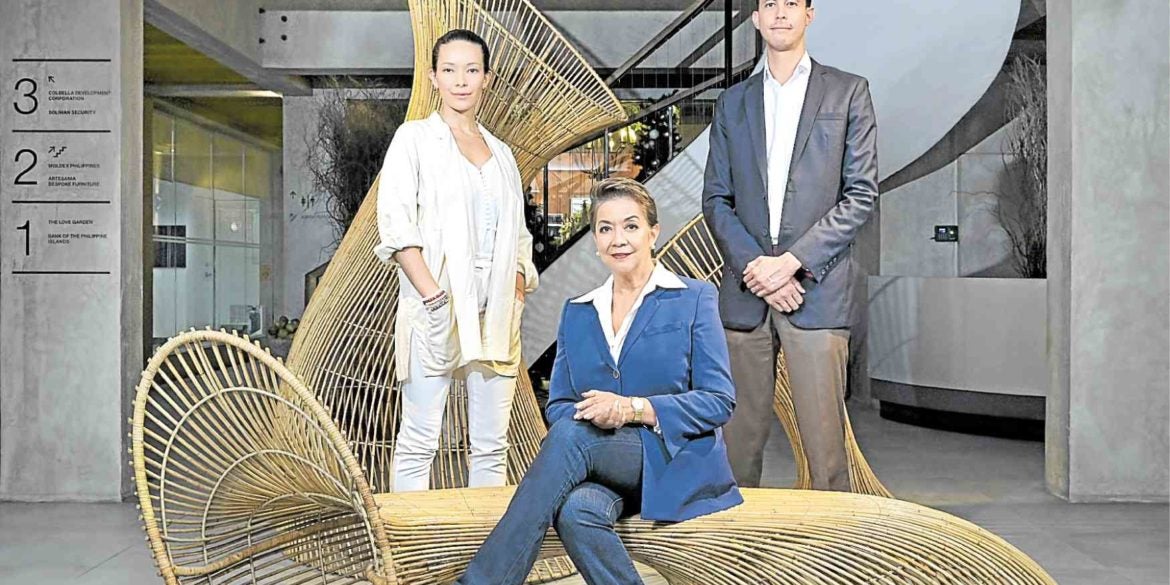 The family behind 910 Arnaiz: Nina Columna Halley (seated) is flanked by her children Rihannon and Shavit, at the lobby adorned with Kenneth Cobonpue’s furniture.

Renovated building melds vestiges of the past with modern elements

The result conveys dignity of heritage and functionality of contemporary design

Architect Don Lino sees every piece of architecture as a narrative.

Not all builders will think twice about demolishing an old structure, obliterating its past, in a hasty effort to modernize. Lino will maintain its intrinsic features while adding contemporary design elements to breathe new life into it.

“In other countries, architecture is appreciated as chronicler of the people’s stories,” he points out.

The 910 Arnaiz building, formerly Colbella Arcade in Makati, is a fine example of renovation work that melds vestiges of the past with modern elements.

Shavit Halley is managing director of Colbella Development Corp., a real estate firm built in 1985 by his grandfather Purisimo Columna.

The Love Garden flower shop, owned by Halley’s mother Nina, is the arcade’s most enduring tenant. A second level was added in 1995 to accommodate more businesses.

More recently, Halley commissioned Lino to make the building more relevant in the 21st century and to draw in new tenants.

“I went for a play of the old and new. The design objective was to keep the essence of the old structure while introducing modern forms. I felt that if the changes were understated, they would interpret themselves,” says Lino.

The original façade was a rectangular framework highlighted with an arch and concrete cornices. The new façade has been given a three-dimensional look, with jutting fins made of Corsten steel, a weatherproof metal with a rusted finish. Overall, the result conveys dignity of heritage and functionality of contemporary design.

“This engraved timeline also shows succession in the enterprise—from grandfather to children, and then grandchildren,” explains Lino.

Originally, the entrance was a modest glass door that opened to a passageway lined with commercial units. Lino says his design “changed how one arrived at the space.”

Now the steps are made of antique travesia (railroad tiles) lined with stainless steel. The front canopy is a contrast of textures as well—an aluminum top with wooden underbelly.

Visitors experience a welcoming vibe upon arrival, with the lobby brightened by natural light and decorated with free-form furniture by Cebu designer Kenneth Cobonpue. The fluid forms soften the visible strength of the beams.

Numerous concrete walls have given way to expanses of glass that make tenant spaces— flower shop, bank, café-events place—seem at once bigger and more relaxing.

The heart of the building is a spiral staircase and skylight. For an edgy touch, Lino retained the slate treads and replaced the balusters with narra and cable railings.

“Many things were too good to get rid of,” Halley agrees.

Lino enhanced the old nuts and bolts, too—painting them red as accents—and exposed the rebars (reinforcement bars). The space behind the commercial area near the back staircase feels just as homey, with numerous nods to the building’s past: preserved narra balusters, steel window grills, and wooden slatted ceilings.

The rear side of the building looks like a gallery for modern art, with portraits by Nikko Lopez, a theater-backdrop mural by scenographer Eduardo Sicangco, a mixed-media piece by Olivia D’aboville, and a painting by Federico Aguilar Alcuaz.

As a final touch, right in the middle of busy Arnaiz Avenue (formerly Pasay Road), a pocket garden behind the building fosters a sense of calm.