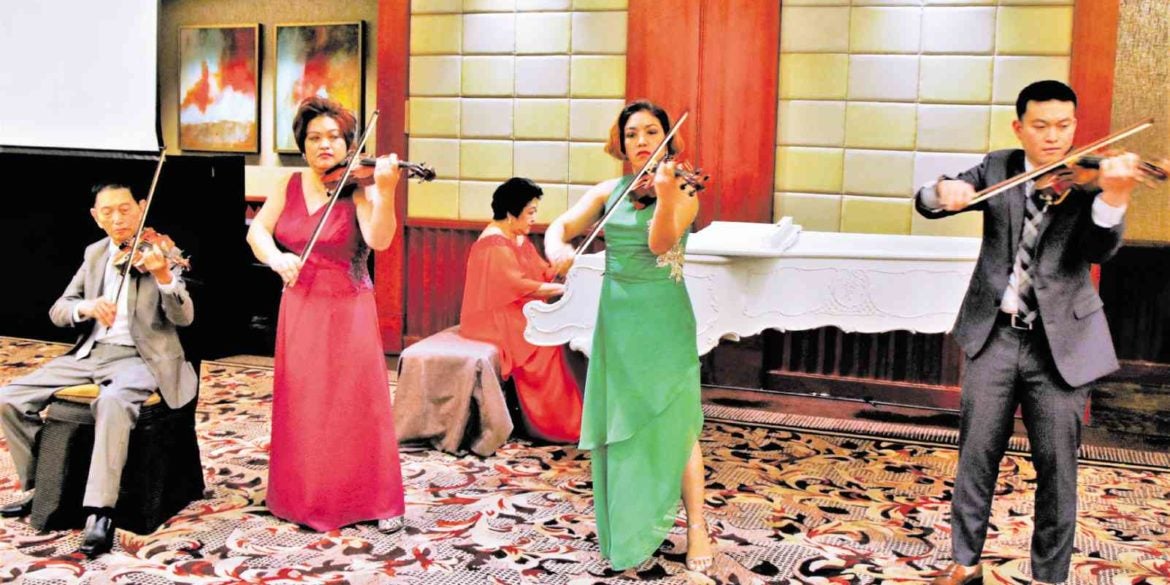 The Kabayaos—Gilopez, Corazon (on the piano), Sicilienne, Farida and Gilberto—making music together —CONTRIBUTED PHOTO

(On Dec. 23, 2019, the Kabayaos—internationally renowned violinist Gilopez Kabayao and his wife, concert pianist Corazon Pineda, along with their children Sicilienne, Farida and Gilberto—performed at an intimate lunch to celebrate 2019 family milestones: Gilopez’s 90th and Corazon’s 70th birthdays, 50 years of musical performances, 45 years of marriage. Farida remembers what the years were like.)

Music deeply embedded itself into our childhood. Like bits of string, music had stitched together patches of scenes and pictures that, as children of a concert violinist and a concert pianist, the remembering continues.

Growing up—the travels, the performances, the people who wove themselves into our lives, the fun spent with the family—remain vivid. It seems it takes only a few musical phrases to unlock a piece of memory—like a music box being opened—flashing frames of precious images from the past.

Beethoven’s Pastoral Symphony, for instance, takes us back to dreary, early-morning school rituals and breakfasts of hot milk and hotdogs.

Our dad, Gilopez, or Pops as we fondly call him, played the orchestral work from our gray cassette recorder almost every morning while we ate. He wanted us to listen to the celebratory chirping of the birds brought about by the flutes, and the gradual building up of the booming, terrifying thunder brought about by the trumpets, trombone and the timpani, followed by a sense of calm from the violins and cellos—a resolution from the turbulence of nature.

The Tchaikovsky Violin Concerto, on the other hand, with deep pain and restrained passion oozing from the cries of the violin, would put us to sleep at night.

Chopin’s Nocturne op. 9 No. 1 in B flat minor brings us back to a familiar image of Mama practicing on the family’s generation-old Steinway grand piano, the sun’s setting rays shooting like shards through the tall, antique windows while Lego bricks decorated the wooden floor.

But the violin and piano sonatas, performed by Pops and Mama in rehearsals and in performances, transform and transport me and my siblings back to the children that we once were.

We remember the quiet evenings at a friend’s house in Chicago while munching with fervor on Cracker Jacks, decorating our little violins with scented bubble stickers, dreaming of larger-than-life doll houses and naively pulling off the heads of our Barbie dolls, as the mystical Faure Sonata in A Minor was being rehearsed in the living room.

The Richard Strauss Sonata in E flat major brings us to the singing streets of New York City and into the artsy studio apartments of musician friends where we basked in the warmth of vanilla and adobo, joyfully filling the same cramped spaces with our laughter and toys.

But it is the Cesar Franck Sonata in D minor that we remember vividly of that “wild” night in Cleveland, Ohio.

While my parents were performing this sonata, my sister Sicilienne, who was 14 at that time, my brother Gilberto, who was 5, and I, 11 years old, were having a fight backstage.

Although we no longer remember the cause of the fight, it became so uncontrolled that Gilberto managed to find a small ax attached to the fire extinguisher, teasingly dangling it right in front of us.

Our parents had no idea what was happening backstage, except for the loud banging and several pairs of feet running around in between the movements of the difficult Cesar Franck Sonata.

If only we could hold time by its reins and keep it from moving forward, just to savor a memory or two a little longer. It scares us to think that the motion of time would mean losing patches of memories. We cling to the hope that, once in a while, we can return to the innocence and wonder of our childhood brought about by the music we breathed, moved and played to for years.

It’s agonizing to think that the capacity to reminisce and reflect will become a rare act (thankfully, with its limitless library of music, YouTube will help us with the remembering).

Nevertheless, we have the assurance that these moments of listening and performing music are being stitched together into a unique and beautiful fabric of music and memories beyond this physical world that forgetfulness will no longer be a part of.

The ubiquitous presence of music in our lives almost felt the same as eating, playing, breathing. Yet our young ears then did not grasp the profundity of hearing such great music powerful enough to illuminate and transform, to make people dance or weep. The music had always been there, stringing all our memories together.

Mum and Pops have had this musical conversation for 50 years—except that the same conversation has taken on new meanings in their journey as husband and wife since their marriage 45 years ago. They may have performed innumerable musical lines sweetly for years, and played, as of late, the same melody—maybe with a little more agitation, a need to compromise here and there, yet the conversation continues, and still, certainly, with so much joy.