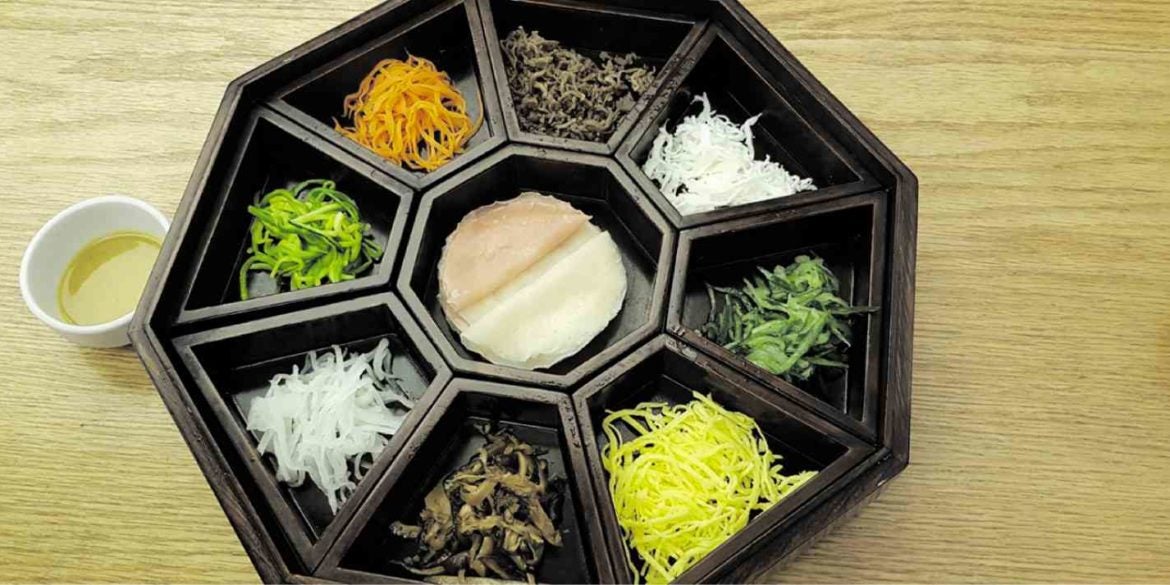 On the menu for the lunch will be items that formed part of the royal cuisine from the long Joseon dynasty era (14th century up to the late 19th century).

Components of the dish are separated by colors and ingredients. They’re made from seasoned vegetables, meats, mushrooms and seafood.

At the center of the gujeolpan tray is a stack of small Korean-style pancakes made with wheat flour. The nine ingredients will be combined and wrapped in the pancake.

The soup is imjasutang, a cold broth mixed with sesame seeds, pine nuts and chicken broth with chicken. This was enjoyed by royals and aristocratic families during the Joseon era. The version to be served on the 16th is seafood-based with abalone.

The fish dish is lapu-lapu jeon, made with seasoned fish, shrimp and vegetables. Jeon is also called jeonya in royal court cuisine.

Beef dish is galbigui, grilled ribs served with ddeokmanduguk (rice cake and dumpling soup) and banchan (side dishes). The latter will be boiled-down shiitake mushroom with soy sauce.

Other side dishes are kimchi and seasoned dried chwinamul (a type of Korean vegetable) with soybean paste.

For dessert, dasik (handmade flower tea cookies) will be paired with lotus flower tea, which has a unique scent and taste.

After lunch, the chefs will conduct a cooking demonstration of the dishes they served.

This group of chefs convene every year in various places around the world to showcase Korean food.

I offered my house as their venue since they wanted a place to cook and teach, but nothing too big and public as their visit is primarily vacation for them.

To usher in good health and long life, and enhance prosperity, we are advised to eat noodles between now and 15 days after Chinese New Year, according to geomancy expert Aldric Dalumpines.

A great noodle dish I am particularly craving is Sergeant Alimango’s Ultimate Birthday Noodle. It is pancit Canton but in a class of its own.

Visually appealing and satisfying on the palate, the noodles are stir-fried in pork, chicken, vegetables, and the restaurant’s homemade seafood broth made with crab, shrimps and chicken and pork bones.

Shrimps and crabs used in all the recipes are from the farm of the owners of Sergeant Alimango in Bulacan.

Eastwood Richmonde Hotel executive chef Victor Barangan became interested in plant-based food because of the growing demand for vegan offerings. He also wanted to maximize the use of high-value vegetables the hotel had on stock.

Inspired by the Netfix documentary “The Game Changers,” he consumed nothing but vegetables, grains and seeds for two weeks. During that time, Barangan noticed the positive impact the diet had on his bike training.

Since then, he has been experimenting on innovative and exciting ways to present old-time favorites in new ways.

It led to his creating a medley of plant-based chicharon— made of broccoli, flaxseed with nori, and red cabbage.

While it cannot be compared to the original chicharon, it has its own appeal—certainly crunchy, too, and, above all, healthy.

Another Barangan creation I particularly like is Ube Pan de Sal with Cheese. His rendition has the gooey ube haleya feel to it. It stays moist and soft even after three days.

After bingeing on lots of food during the holidays, I called up Kristal Hierco Reyes of Pure Jus. She helps me flush down all the excess water, weight and toxins.

Her juices are both delicious and effective. She can create a juicing program just for you.

Here is her recipe to help you detox.

Put the following in your juicer and extract: