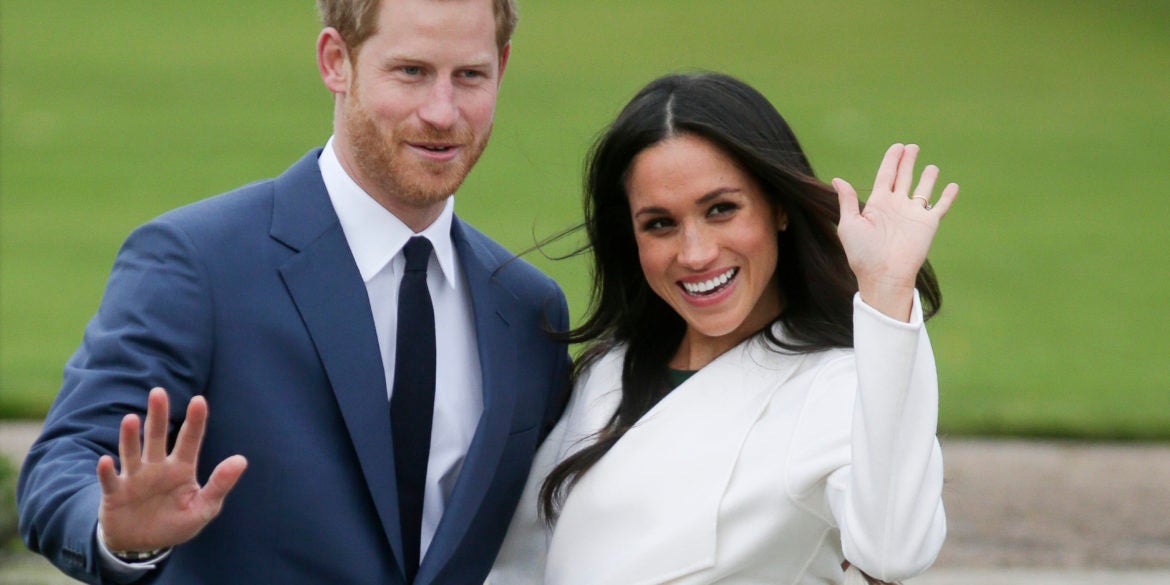 (FILES) In this file photo taken on November 27, 2017 Britain's Prince Harry and his fiancée US actress Meghan Markle pose for a photograph in the Sunken Garden at Kensington Palace in west London, following the announcement of their engagement. - Britain's Prince Harry and his wife Meghan will step back as senior members of the royal family and spend more time in North America, the couple said in a historic statement Wednesday. (Photo by Daniel LEAL-OLIVAS / AFP)

‘Megxit’ trumps Brexit and Iran in UK after royal bombshell

The news Prince Harry and his wife Meghan will step back from being “senior royals” knocked the Iran crisis and Brexit from the headlines in Britain on Thursday.

The pair announced Wednesday evening they were quitting to “carve out a progressive new role within this institution” — but reportedly without the approval of Queen Elizabeth II.

That prompted immediate headlines of “Megxit” and palace intrigue.

“Queen’s dismay as Harry and Meghan step back from royal life,” screamed the Daily Express.

Every British newspaper, including the Financial Times, put the news on their front pages — with the country’s infamously lurid tabloids getting characteristically creative with their headlines.

Its rival the Daily Mirror went with “They didn’t even tell the Queen”. The Daily Star opted for “The Royal formerly known as Prince”.

Broadsheet The Daily Telegraph — purportedly the queen’s newspaper of choice — declared “Harry and Meghan quit the Firm”, using the nickname sometimes given to the family.

The Times said they had quit amid a “palace split”.

The right-wing Daily Mail echoed the sentiment: “Queen’s fury as Harry and Meghan say: We quit.”

Even the FT, which typically reserves its front page for the world’s leading business and economic news, got in on the act. “Royal couple pull out of public eye in search of financial independence,” it headlined.

Media around the world also covered the story prominently.

Germany’s most popular daily Bild declared that the announcement had “fallen like a bomb on the royal family”.

“The exciting question is: will Buckingham Palace hit back?” the tabloid asked.

Noting Buckingham Palace’s response that the couple’s future role “would take time to work through”, the Munich-based daily quipped: “It sounds as if Megxit could turn out to be as messy and long-winded as Brexit.”

In the United States, where the duo may now spend more time, the New York Post mocked Meghan and Harry as heading for a “commoner life”.

The tabloid’s eye-catching front page caricatures them as deadbeats sitting on a drab sofa watching TV, Harry in his underpants wearing a stained white undershirt, drinking cheap beer and eating a microwave meal, while a cigarette-wielding Meghan has her hair in curlers.

Back in Britain, royal commentators and prominent personalities flooded the airwaves and social media with their takes.

“Wow. What a disgraceful way to treat The Queen. Shame on Harry & Meghan,” tweeted morning TV host Piers Morgan, a persistent critic of the duchess.

Rachael Bletchly, a columnist for the Daily Mirror, said the shock statement from the queen’s “petulant grandson must have hit her in the solar plexus”.

“Harry has selfishly turned his back on the institution she has fought to modernise and secure for him and his children,” she added.

Meanwhile Peter Hunt, a former royal correspondent for the BBC, told Channel 4 News it was “not a good day for the British royal family”.

“In the 21st century, in a new decade, they have shown they haven’t been able to accommodate in the traditional way their first senior royal from a BAME (black, Asian and minority ethnic) background,”  he said, referring to Meghan’s mixed race heritage.

“Harry and Meghan are very much loved and if we’re not going to see so much of them I think that’s a real tragedy.”

Cover image: In this file photo taken on November 27, 2017 Britain’s Prince Harry and his fiancée US actress Meghan Markle pose for a photograph in the Sunken Garden at Kensington Palace in west London, following the announcement of their engagement. (Photo by Daniel Leal-Olivas / AFP)