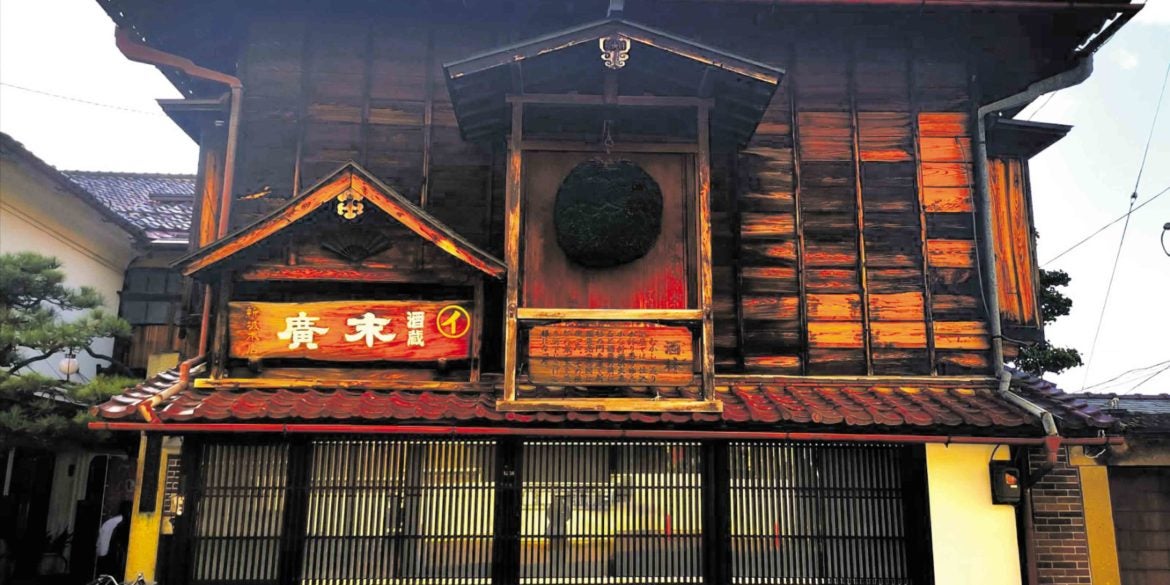 The Suehiro Sake Brewery in Aizu has been crafting rice wine since the end of Japan’s Edo period.

In search of Japan’s famous peaches in Fukushima

While Japan is always a good idea for a holiday, it was not the reason for this particular trip, nor was it a visit to one of the usual destinations.

Departing from Tokyo on the eastbound Shinkansen, the high-speed train moved like a flash of light through the evening to a place where a triple disaster was etched in the world’s memory.

Nine years ago, a magnitude 9.1 earthquake hit the Fukushima prefecture, triggering an equally devastating tsunami. Nuclear reactors along the coast were damaged, causing air, water and land contamination. It was to this blighted land that our night train was headed.

Two days earlier, officials from the Japanese government and from the Tokyo Electric Power Company Holdings Inc., which owns and operates the nuclear plants, provided extensive presentations on the rehabilitation progress in the affected areas over the last few years.

Efforts to address radiation damage and decontamination made it possible for survivors to rebuild their lives. The returning population, though reduced, went back to farming and fishing, but the once thriving industries are now struggling. Despite meeting the stringent Fukushima standards that are stricter and higher than the European and Japanese prescribed levels for safety, the market continues to remain cautious.

“The general public is not interested in scientific data,” Kanke Ichiro, state minister for reconstruction, explained to an international media contingent. “Scientists are not being listened to. They have been trying to convince the world that the crops and marine products can be eaten without risk to their health.”

The notion that produce from Fukushima is unsafe persists despite measures monitoring all foods from rice, fruits and vegetables to fish and other seafood. Constant reassurances by the Prefectural Government of Fukushima assert that “any product found to exceed the safety standard is banned from being shipped based on the product type and produced area.”

The certainty of the safeness of the once contaminated area and its agricultural and water products was bringing us to the place where doubts and disbelief were considered the fourth disaster.

The bullet train is the fastest way to get from Tokyo to Fukushima. Covering roughly 200 kilometers on track, we arrived on the last trip close to 10 p.m. The Koriyama Station was almost empty. Residents had retired to their homes.

Walking through the railway terminal, we espied booths anticipating the forthcoming 2020 Olympic Games. The Tokyo Olympic Torch Relay will go through 25 municipalities in Fukushima over three days, starting at J-Village located in Naraha and Hirono towns.

The prefectural government is taking this opportunity to express appreciation for the support given to Fukushima’s rehabilitation, as well as to show the progress that has been made in revitalization.

A softball game will kick off the 2020 Olympic Games at the Fukushima Azuma Baseball Stadium where six softball matches and one baseball game are being hosted.

J-Village is a symbol of a reinvigorated Fukushima Prefecture. It will be easily accessed by a railway line as a temporary stop and will start operating when events begin in April. Besides being a central facility in the region to promote sports, J-Village is also the platform to show the world the environmental restoration following the nuclear power station accident.

Japan Ambassador to the Philippines Koji Haneda had mentioned the peaches of Fukushima. He said that the Akatsuki peaches of Japan are pinkish, juicy and famous. He added that the same region where the succulent Hakuto variety grows is also known for exceptional sake. Sampling both became part of a personal agenda on this tour.

The cool temperatures in Fukushima are suitable conditions for the cultivation of agricultural products. Good soil drainage in the Tohoku region of Japan, particularly in the Fukushima and Yamagata prefectures, contributes to a favorable harvest of the popular summer fruit. We arrived way past summer and the peach-picking season was over, but I remained hopeful that biting into a succulent, aromatic peach would happen.

As in most flavors of Japan, the rice wine of the Suehiro Sake Brewery in Aizu is refined, elegant and memorable. The family-run business stretches back eight generations to the end of the Edo period.

Visitors walk through a small courtyard of a traditional-looking house standing among contemporary urban architecture. Past the in-house café is a working brewery, a museum and a retail section where sake selections are available for tasting.

The Sakagura has consistently produced award winners and a sampling conveyed the premium of its line. In particular, the Suehiro Densho Yamahai Junmai was dry, smoky, round and smooth with a gentle sweetness, while the Suehiro Densho Yamahai Junmai Ginjo was aromatic, hinting of lilac, with a good harmony of acidity, tanginess and sweetness. An allowable number of bottles was packed securely in the luggage.

One of the stops during the nine-day program was at Shogatsu-so, a restaurant run by a husband-and-wife team. Looking more like a home than a restaurant, it is listed as one of the best restaurants in Koriyama specializing in carp.

The hospitable couple allowed access into the kitchen where the chef could be observed making the meal we were going to eat. It was something to see the carp moving in the pail and then being prepared as an artfully plated sashimi. All the courses were fresh, including the ingredients for the hot pot cooked in the center of the tables.

The dining experience was enhanced by the natural surroundings framed by picture windows. Greenery, the flowers in the garden and architectural details made visual poetry that added to the flavor of nature’s bounty served in beautiful stoneware, lacquer and ceramic dishes.

There were no hesitations eating raw fish and other seafood. A visit to the Soma-Futaba Fisheries Cooperative Association earlier, coupled with an observation of the voluntary inspection of radiation and the fisheries operation, were reassurances that the sushi and sashimi we consumed had passed the safety standards.

Return of the salmon

The abundance of the catch was in contrast to another site in Chiyoda City where salmon had been plentiful. A barrier used to catch the fish had broken the momentum of the approaching tsunami, sparing the surrounding residential area.

However, the migration of the salmon had been affected and there were no sightings for years. The fish are said to return to the waters where they spawned and the people waited years for them to swim back.

That particular morning, we stood on an elevation looking down to the clear, rushing waters where observers had been stationing themselves daily by the banks. It proved to be a propitious moment.

Suddenly, four big salmon appeared. They were swimming against a strong current, halting their upstream movement long enough for us to see them. Excitement, elation and several snapshots marked the return of the salmon. It was another significant development in the revitalization of Fukushima.

Naraha, where J-Village is situated, was part of the Tokugawa shogunate’s holdings during Japan’s Edo period. After the 2011 earthquake and the subsequent tsunami and nuclear disaster, the population evacuated on government directive and was allowed to return only four years later when the decontamination work was completed. While agriculture had been the main source of livelihood, many also worked for the Fukushima Daini Nuclear Power Plant.

Only about half of the residents returned. There were less grade school and high school enrollees that one of the two schools closed down and the rooms in the buildings were used for other purposes.

It was in one of the former classrooms that we met senior members of the community who had organized themselves to make traditional Japanese slippers. Using donated old clothes, they cut up the fabric and following Japanese traditional slipper-making techniques, fashioned colorful home footwear.

The ages of the group of mostly women and a couple of men ranged from the mid-60s to 90. They met thrice weekly and could finish one pair a day. Besides providing a source of income, making slippers together was a social activity which gave them something productive to do.

They appeared to be happy and content, expressing simple wishes for good health and wanting to be with family, who had relocated to other places.

There was no anger or bitterness over the events which changed their lives. The earthquake and tsunami were acts of nature, they said, and the nuclear disaster was an accident.

Such an outlook translated into slippers with many bright colors. Italian fashion house Marni had commissioned them to make the fabric footwear for a collection, a prototype of which was on display but not for sale. Buying a pair was more than just a souvenir. It was a tribute to their admirable spirit.

Throughout the nine-day trip, inquiries for the Fukushima peach were made in five different cities of the prefecture. Despite being politely told that it was no longer in season, the quiet tenacity of the people we met rubbed off.

The search met with some success in a cooperative store selling farm produce. On the refrigerated shelf, encased in a plastic bubble with syrup, was a peeled peach. Even our Japanese guide was excited by the find and bought as well.

I had hoped to find more in Tokyo at a store that sold exclusively Fukushima products. Midette is a pilot shop offering food, sake and traditional crafts, including the happy slippers.

Interestingly, the sales pitch for the slippers was to clean floors by walking around the house in them. Once done, it could be laundered in a washing machine and reused again.

There were fruits for tasting and only a sense of propriety kept me from consuming a whole bunch of grapes, which were firm, juicy and sweet. I was already much grateful that the much-vaunted peach was carefully packed in my luggage.

Back home, it felt too special to eat alone, and unwrapping in the presence of family had the solemnity of a ritual. There was a moment just to take photographs before slicing into the still firm, whitish fruit with a pink blush.

Maybe it was just imagination, but there was a subtle aroma in the mouth. After the first bite into the fleshy sweetness, I picked up the scent. It was a whiff of a promise for the return of better days.