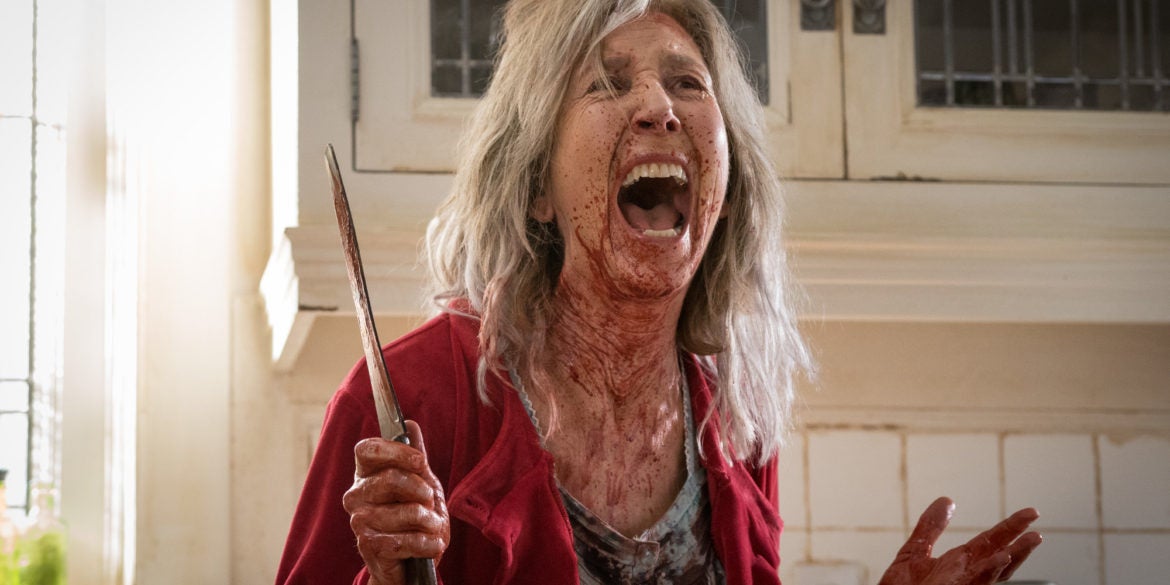 ‘The Grudge’ of Lin Shaye

On the set of “The Grudge” in Winnipeg, Canada, writer and director Nicolas Pesce told actress Lin Shaye that he had a surprise for her. “He said, ‘Come here, let me show you something.’ He takes me into this room and there’s like four heads of me sitting with my mouth open. It was really freaky.”

That’s the kind of thing that happens when you star in horror movies—something that isn’t new to Shaye who has appeared in well over a hundred films including “Critters,” Wes Craven’s “A Nightmare on Elm Street,” “Ouija,” “Dead End” and who is beloved as Elise, the psychic in the terrifying “Insidious” films.

In “The Grudge,” Shaye plays Faith Matheson, one half of a sweet elderly couple who spent their life in a happy marriage and who are living in a haunted house in hopes that Faith’s impending death wouldn’t bring them apart. Playing her husband William is Frankie Faison (“The Silence of the Lambs”). “I thought that Frankie did a fantastic job in terms of his delicacy. He’s a big man in real life, I’m 5’2” and he’s probably 6’4”. He’s a big and robust man and he was so gentle and sweet with me… and we all know what I do to him after,” said Shaye, who spoke to us on the phone last month from Malaysia where she was promoting the film.

William and Faith do not just have to deal with the supernatural in the film—they also face the very real problem of losing one’s self and one’s loved one to dementia.

Theirs is just one story in a number of different tales interwoven in “The Grudge” which also stars Andrea Riseborough, Demián Bichir, John Cho and Betty Gilpin. Pesce said, “It’s a tapestry of stories that are loosely connected, all surrounding this house… It’s sort of a puzzle movie. It’s always about figuring out how these things go together—learning hints from other people’s stories that might give you insight into another story line.”

Pesce, whose first feature film “The Eyes of My Mother” debuted at the Sundance Film Festival in 2016, created the story with Jeff Buhler and wrote and directed the “The Grudge.”

It comes 15 years after the release of the first American “The Grudge” movie which was based on Takashi Shimizu’s Japanese horror film “Ju-on: The Grudge.” “We had an opportunity with this franchise to not remake anything, but rather add a new installment into the franchise—a new chapter to the canon,” Pesce said.

The movie blends everyday tragedies with supernatural horrors while making sure to pay homage to Shimizu’s classic scares.

And just like the previous films, “The Grudge” still is about rage. Shaye said, “This has a really powerful idea that rage destroys people, and destroys them forever. It’s amplified, of course, in the story, and in a filmic way. But I love the idea that rage is such a negative experience that changes people’s lives forever.”

What attracted you to this project?

I was fascinated with the story. I knew about “The Grudge,” although I had never seen the films but I knew the premise and I knew how popular the franchise was. It was actually Steve Bersch at Sony who called to ask if I was interested and of course, as an actress, when anybody calls if you’re interested, the answer is always yes. At least that’s how I operate… I thought it was a fantastic script that had great relevance in 2020. I was very excited to be a part of it. 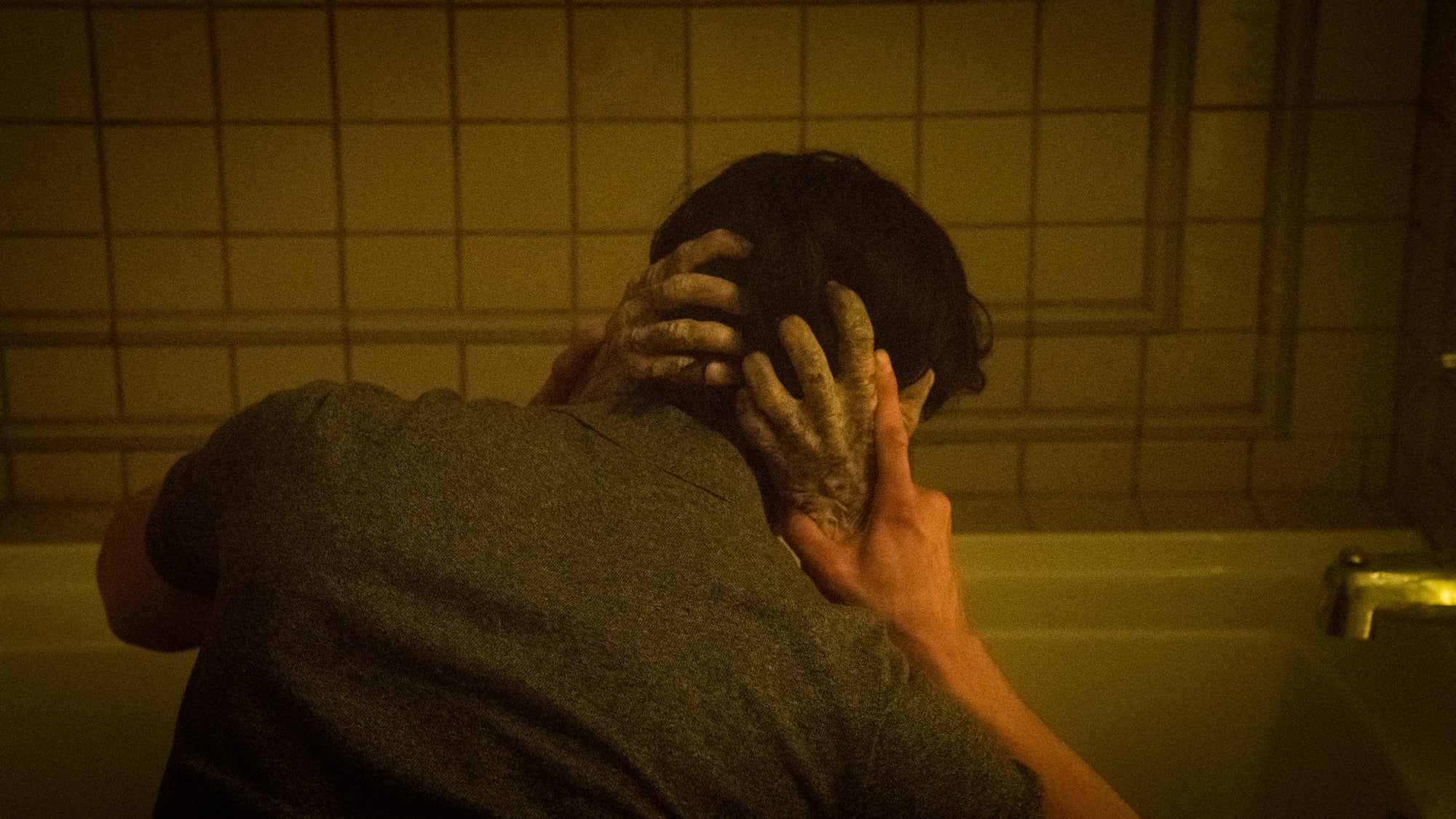 How did you prepare to play Faith?

I’d seen several documentaries about dementia over the last couple of years… The deteriorative factor is heartbreaking because you get to a point where you seriously don’t even know who’s sitting next to you. There’s a scene that’s not in the final cut… It showed me with my husband painting my nails with some pink polish and we’re reminiscing about our life together which was a very quiet, wonderful 50 years of marriage. It gave me a very powerful starting point to disintegrate from. Then that sort of zombie glaze that takes you within dementia starts to take over… It’s clinically a very interesting character to investigate. I loved the woman. I felt bad for her. There was a part of me when we were shooting that was going, “Aww, poor Faith, this sucks.”

Is it true that Nicolas is usually strict with his actors and doesn’t let them do what they want, but with you he had no rules?

He told me that. When I come into a project, I try and feel out the atmosphere in terms of my creative input, how much of it is allowed, how much of it is accepted… In this situation, I think Nick was surprised and delighted by some of the ideas I had. I am driven by what the story inspires in me and unafraid to express my feelings and thoughts about it. We came up with some inspiring moments that he loved and appreciated and he’d ask me, “Do it your way now” or “Do what you want.” That’s very luxurious for an actress. I feel very fortunate that he gave me that gift.

You told me in a previous interview that making a film is like being on a different planet for a while… can you describe the planet that is “The Grudge?”

This was a planet of deterioration. It was very uncomfortable, it felt very unsteady, unstable, like everything was sort of put on its edge. Just when you thought you were in a safe place, you weren’t. It was very unpredictable and frightening. Of course, I had what I feel were delicious moments even though they were horrifying in terms of the physicality of my character. It was really fun as an actress to play but also really harrowing when you thought about who this person became to be able to do that to herself. It goes against everything that you’re taught about protecting yourself. That was very powerful for me.

How do you take a break from heavy days on set?

Frankie Faison and Jacki Weaver and I, we were the threesome for dinner. We would meet up for dinner each night and talk about the material and the set and laugh and talk about each other and ourselves. It’s actually quite wonderful. Depending on what your schedule is, you may have new scenes the next day and you go home and you work on that a little bit. I like to reminisce where I’d just been with the character which will inform what I will do the next day. There’s a storytelling process that’s pretty fascinating and also one of the reasons I love acting. I love finding what is that story and who is this person. It’s a little harder when you live at home because you come home and the toilet’s broken and the dog has to go out and the cat pissed on your bed (laughs). On some level it’s easier to be out of town, which we were, because you stay in the framework.

Do you watch your own horror fllms? And do you get scared when you do?

I have watched some of them. I don’t get scared. It’s more of me going, “Why did I do that?” Or “Why didn’t I do that?” Or “I look good there” or “Jeez, I look terrible.” I sort of remain in evaluation mode. I don’t love watching my own work for that reason because as an actress I never want to be outside myself when I’m working. I like to stay in the interior. When you’re watching the outer image too much, you start going, “Oh I didn’t look good when I did that.” You start looking at yourself from the outside rather than the inside and I think that’s destructive. I do know when I’ve hit it. I’ll see a scene and I’ll go, “That was exactly what I wanted. And that’s exactly what the scene needed.” I’m able to congratulate myself when I do well but I’m also very hard on myself when someone else may not see the cracks in the sidewalk but I do.

They had to make a dummy of you for an important scene… were you on set when they shot it?

We did a latex casting of my head, my arm and hand… I did watch the gag when the worst thing happens and I screamed… It was a lot of fun. There are those kinds of things which are horrific on some level and are technically fascinating to perform. There’s a rhythm to it.

You have a lot of upcoming projects, what’s next for you and what are you most excited about?

I’m working on “Penny Dreadful” which is a Showtime series right now. It’s the first time I’ve ever done a series and I’m very very excited about it. John Logan, the showrunner, wrote a fabulous series of episodes about Los Angeles in 1938. The Nazis were in Los Angeles and wanted our state… Nathan Lane, who is royalty to me, one of the greatest talents on our planet, he and I play Nazi hunters. The production values of this show is just out of this world. Incredible wardrobe, incredible sets, incredible dialogue and story lines and incredible actors. And of course I’m really really excited about “The Grudge.” I think it’s gonna catch people in a way they’re not expecting. I think it’s going to make people think about things… It’s a grown-up puzzle that gives you very satisfying and horrifying answers about what rage can do to a person. I think it’s a really fantastic story to tell and I’m honored to be in it.