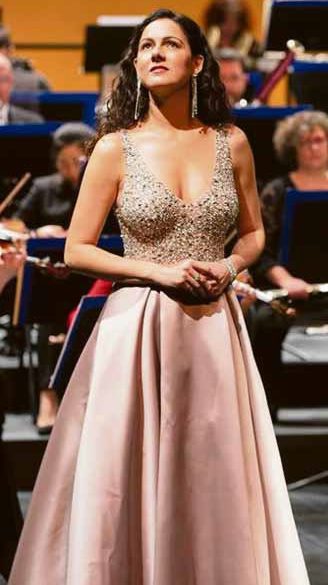 Donizetti’s “Lucia di Lammermoor,” last staged at the Cultural Center of the Philippines (CCP) more than 40 years ago, returns to the same stage on Jan. 30 with French soprano Melody Louledjian singing the title role and with Filipino tenor Arthur Espiritu singing Edgardo.

The Donizetti opera was last staged at the CCP on Jan. 30-31 and Feb. 6-7, 1976 by the Centro Escolar University (CEU) to mark its foundation anniversary.

The curious thing about it is that its libretto was in “Pilipino,” the heavily Tagalog-based “national language” before today’s “Filipino.” Its title was “Lusiya.”

The translation was by the veteran Tagalog poet and scholar Inigo Ed Regalado, the head of the CEU Pilipino department.

The 2020 production of course will be in the original Italian.

“Can’t wait to do this at the CCP,” Louledjian told the Inquirer even as she admitted she was in Manila for a day some seven years back when she sang on a cruise ship. “I think I explored the Manila street for a day and wished I could go back. Suddenly, I am Manila-bound not as tourist but as a guest artist in an opera production.”

Described by Opera Magazine as a singer who “enchants with her fresh and luminous tone,” Louledjian said Lucia was a dream role. “When I was offered to do it in Manila, I was actually prepared. I dreamt of singing it early in my singing life but had no idea when the dream would come true.”

She is aware opera lovers Act 3, the “Mad Scene,” is the main drawing power of the opera. “The role has its difficulties although it is shorter than Traviata which I did in Opera Tenerife more than a year ago. Traviata demands a lot from your lyric and dramatic capabilities but Lucia is a challenge in managing your vocal energy. You must know how to spread it out or else you run out of energy for the much-awaited Mad Scene.”

She said she has special affinity with the first aria, “Regnava nel silenzio (Silence Reigned),” which to her is a challenge in bel canto. “It is a pleasure to sing it. I find it a good massage for the vocal cords. I can feel my body responds to it in a different way. It is hard to describe it but it is in a sense more sensual than intellectual.”

The soprano said Maria Callas is her idol and her favorite Lucia, but for technical points, she goes for another opera icon, Anna Moffo, who was a classmate of Filipino soprano Fides Cuyugan Asencio at the Curtis Institute in Philadelphia in the ’50s. “There is nothing like Maria Callas but technically, Moffo is the absolute perfection,” said Louledjian.

Based in the south of France, Louledjian said she comes from a family of music lovers. Her father with Armenian roots plays the accordion and her mother sings both opera and jazz. “I virtually grew up surrounded by music. I studied early to become a pianist and could read music before I could read French. But when I attended my mother’s opera class for the first time, I got hooked on opera and started listening to the recordings of Maria Callas. I have a teacher who taught me how read music with an eye for color.”

Named after a character in one of the songs of French singer and song writer Serge Gainsbourg, Melody Louledjian said she has a life outside of singing. “I write poetry, I paint using the ceramic medium and yes, I compose. I play the accordion; dance the flamenco and I have a jazz band which had successful concerts in France. I love to create which is a big part of my essence.”

The soprano added she couldn’t wait to meet her Edgardo in the person of tenor Arthur Espiritu. “I look forward to sharing moments with him through our characters in the opera. I enjoy every moment as I prepare for my role and when you blend with vibration of voices from difference singers. I look forward to this.”