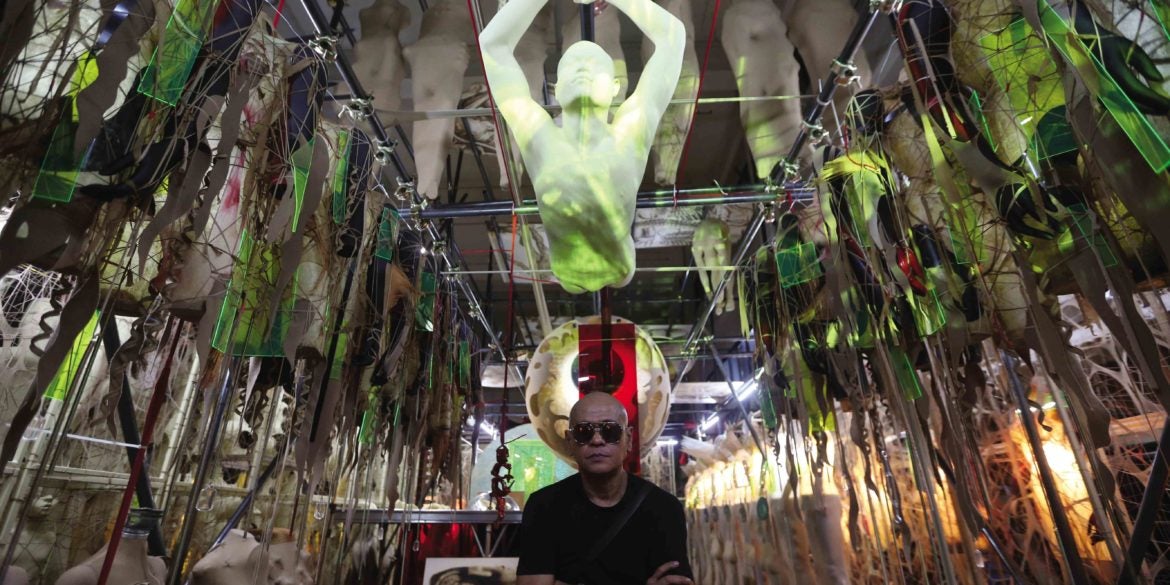 Gabriel Barredo, the pioneering kinetic sculptor known internationally for his maximalist works that married the macabre and the beautiful, died on Jan. 6. He was 62 years old.

“How can you be minimal when everything is still so maximum,” Barredo said in a video to promote his collaboration with Ballet Philippines (BP), “Opera, in 2016. Hence, his carnivalesque sculptures and installations—filled with striking objects such as toys, skeletons, severed dolls, amputated body parts, pop-culture icons, electric wires, wood, computer parts, bottle caps. It’s bricolage, collage, postmodern, junk, all of this and more.

Everyday objects turn into a parade of familiar and peculiar images. His works pulsate with the audiences’ heartbeat, then drags it faster. There’s not a hush. “There’s too much out there,” he said,” And so maybe… that’s probably why my works are so busy… it is because today’s era is so consuming.”

Born in 1957, Barredo studied fine arts at the University of Santo Tomas (UST). He could’ve studied painting or music, or performance art, since it was what he really wanted. But his dad was “old school,” so he took up advertising arts at UST.

His inclination to arts may not be accidental. His sister Maniya was prima ballerina at the Atlanta Ballet, his aunt Baby was one of the founders of Repertory Philippines, and Lea Salonga was a first cousin.

This diverse background is reflected in his work. A self-taught sculptor, he thrived through his innate artistry and imagination. In a Silverlens artist’s profile interview, Barredo said, “I have this forte for using found objects, because early on I couldn’t afford to buy the right materials, so I improvise.”

After his UST education, his career took off when in 1981 and 1982 he won the gold medal at the Art Association of the Philippines (AAP) Annual Competition. In 1994, he won the first grand prize at the Philippine Art Awards and the Juror’s Choice at the Asean Art Awards held in Singapore. He obtained the gold medal at the Metrobank Foundation Annual Art Competition in 1985.

In the following years, he began exhibiting his works in prestigious galleries such as the ARNDT Berlin and the Soka Art Center in Taipei.

“The work of Gabby Barredo never fails to send his viewers into paroxysms of delight and pleasure,” said the artist-critic Cid Reyes in a phone interview. “He was a like a paragon of the phantasmagoric… He was baroque. He was over the top… Gabby is of a different level. Very flamboyant kind of sensibility.”

In her entry on Barredo in the Cultural Center of the Philippines (CCP) Encyclopedia of Philippine Art (1994), the late art critic Alice Guillermo said Barredo’s works were “caught in the borderline between reality and fantasy” and raised “the question of material and process.” In short, they would be works that would be called now as “meta-art.”

Despite his success, he was shy and elusive, usually declining interviews, even skipping his own exhibit openings. “He is very reserved. He’s there, but he likes to stay in the periphery,” Reyes recalled.

But absence was never a word to be associated with his work, for there is always an ever-powerful presence. Maybe this was the energy that he tried to control for long, which exploded when he worked.

Describing his own piece, Barredo said, “You walk in, it’s not just staring at the work, it’s not limited to just a flat painting on the wall, it could be a lot more. It’s almost like it embraces you.”

He’d rather stay in his studio and work, while listening to music. He mentioned his love for the music of George Crumb. Maybe in those moments, there was an artistic affair, a conversation between avant-garde sensibilities, making the work of Barredo an order in chaos composed of movement, rhythm, repetition, dynamics and experimentation.

In 2013, Barredo created a 30-feet long installation sculpture—an assemblage consisting of smaller pieces for the inaugural Art Fair Philippines, entitled “Asphalt.” Like what he was best known for, the sculpture consisted of abundant objects in different mediums. There was also the use of different icons from different cultures. “Asphalt” was later acquired by Louis Vuitton (LV) Moët Hennessy, the conglomerate behind luxury fashion houses such as LV, Dior and Givenchy.

He then explored more themes and possibilities in his exhibit, “Opera,” at Silverlens Galleries in 2015. As described in the exhibit notes, “Instead of offering comforting sermons, he invites us to view the body itself, asking us to confront the mortality of the corpse, to contemplate upon its passing and empathize if not make sense of its beauty.” And beauty was into his work, a more defined use and display of materials.

Barredo’s last and largest masterpiece was exhibited in 2016 at the Nicanor Abelardo (Main Theater) of the CCP. He collaborated with BP for an installation based on the Silverlens show. His pieces overflowed on stage and around the theater. “Gabby’s greatest contribution is the creation of his sculptures with moving parts,” said CCP chair Margie Moran-Floirendo in a phone interview.

The former BP president collaborated with Barredo in the production. “Opera,” which combined music, dance and sculptures.

“’Opera’ was distinctly a Gabby creation, some beautiful and other pieces, surrealistic. Every piece of work came from a mind that spoke from an interplay of varied emotions,” said Moran-Floirendo

BP’s “Opera” was “meant to operate surgically rather than a sort of musical ballet,” explained further the former Miss Univerve. “’Opera’ presented kinetic sculptures, video projections and dancers. It was a totally immersive experience under the master maximalist’s show.”

It was not the first time that Barredo did “production design” for the dance stage. In the 1980s, he joined his sister Maniya at the Atlanta Ballet in Georgia where he designed costumes and sets, including huge screens.

To create a ballet show on the scale of “Opera” wasn’t surprising since Barredo’s energy was overflowing. He wanted to challenge the audience.

From these magically immersive grand works, bordering on the sharp edges between dream and reality, there was Barredo’s interest in death and body and “medical stuff.” There’s fascination with the macabre. “The reality of life and death, I mean, it’s so obvious that, you know, we’re all gonna get there,” he noted in an interview. This naturalist attitude toward life, the dance with the notions of death, the privation of fear, may be perhaps what shocked viewers straight to their guts.

His passing, however, was not theatrical. Just like him, there was quietness—like a song fading, like the flapping swans from “Opera.” “Maybe it’s like us,” he said in the exhibit notes. “We’re flapping and all of a sudden… we’re just so damn tired it’s over.”

Kinetic sculpture is all about movement. Even death’s stais is a form of energy. “[A]s much as Barredo has set up a place for mourning, he has also given us an altar for rebirth,” Silverlens declares. The flesh has turned cold, but the work lives on.