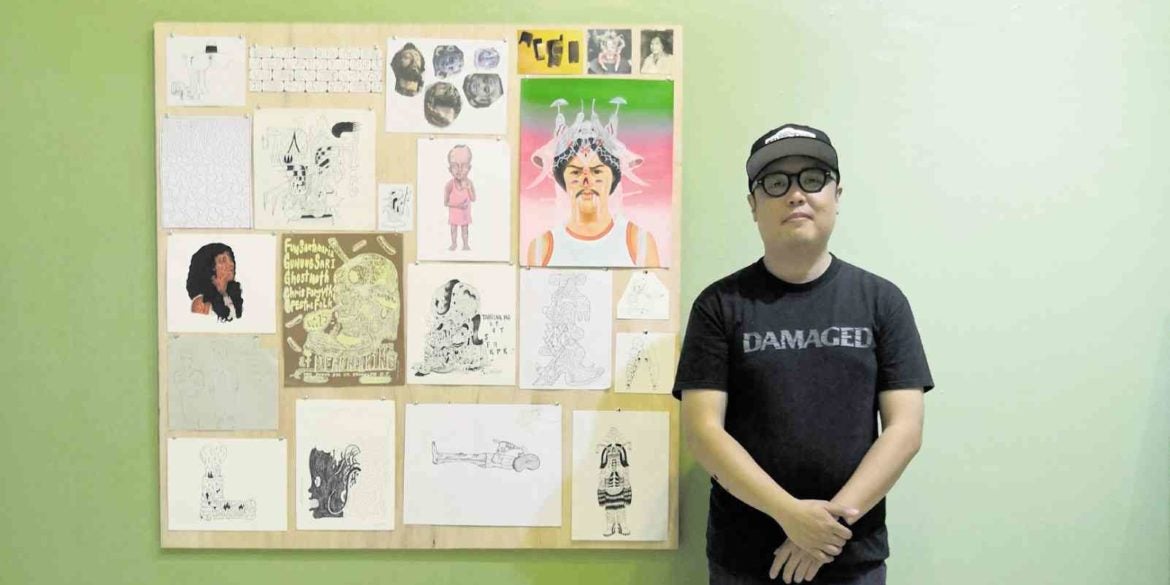 Louie Cordero: “The only thing that matters is how you find your voice as an individual.”

It seems we have a Marie Kondo moment to thank for “Bogus Heritage,” Louie Cordero’s ongoing exhibit of drawings, studies and prototypes at the Blanc Gallery.

The artist’s impending move to the balmier climes of Batangas (spurred mainly by the city’s intolerable traffic situation) led to the reexamination of boxes and boxes of drawings, mostly in pen and ink or pencil on paper, and the realization that the joy they sparked was undimmed.

The drawings represent more than 15 years of the artist’s life, starting around 2000 and ending more or less four years ago, when he lived and worked in a studio on 17th Avenue in Murphy, Cubao.

It was during this period that Cordero developed and perfected the visual language and distinct style that saw him leap from cult semi-obscurity to being lionized on the global contemporary art stage.

Though often lumped with other artists under the rubric “pop surrealism,” Cordero’s work is a peculiarly Filipino synthesis of underground comix, psychedelic art, punk graphics, pop kitsch and lowbrow touchstones, such as gore flicks and indie rock album covers; liberally peppered with the artist’s own obsessions such as novelty singer Yoyoy Villame and the midget actor Weng-Weng.

Pregentrification Cubao was fertile soil in which these influences could germinate and cross-breed, being at the geographical heart of Metro Manila.

It didn’t hurt that Cordero’s studio was literally within spitting distance of a Pilipino komiks publishing house, whose warehouse contained years of back issues featuring the works of artists such as Hal Santiago and Vincent Kua Jr., some of Cordero’s heroes when he was growing up in the backwater town of Malabon. (Townmate Nonoy Marcelo was also an early influence through his “Ikabod” comic strip.)

At the University of the Philippines College of Fine Arts, Cordero came under the tutelage of conceptual art pioneer Roberto Chabet.

“He encouraged my inclinations by feeding me with underground comics and Mad magazine,” Cordero recalls.

He also came under the influence of more senior graduates such as Manuel Ocampo and Romeo Lee.

After finishing his art studies in 1996, short on funds and art materials, Cordero began his “woodshedding” period in Cubao.

“I drew every day,” he says. “It’s my foundation. For other artists, their foundation might be conceptual thinking or painting. My foundation is drawing.”

Cubao turned out to be Ground Zero for Cordero’s immersion in Pinoy lowbrow.

“Jeepney culture was a big influence on me, the sign art from the Cubao-Antipolo jeepney route, billboard art, the old movie houses.”

Cordero also found nourishment in the convivial art community sprouting in Quezon City, including Katya Guerrero’s 18th Avenue circle and nearby Cubao X where he helped open one of the first art spaces.

Within two years he had created his breakthrough work: the self-published underground comic book “Nardong Tae.” Its central figure was a human turd seething with existential rage—the ultimate “life is shit” statement.

In 2006 Cordero was selected as one of the Cultural Center of the Philippines’ Thirteen Artists awardees, and he has gone on to exhibit in Europe, Australia and Southeast Asia.

He hasn’t abandoned his roots, however. That much is evident in “Bogus Heritage.” Cordero finds the old distinction between “high” and “low” culture mostly irrelevant.

“The only thing that matters is how you find your voice as an individual,” he says.

Many artists prefer to keep their sketchbooks private, allowing only their “finished” works to be viewed by the public. Raw and unfiltered, the images found in them offer a revealing glimpse into the tough processes that go into the finished works, including ideas that might be rejected or self-censored. It is for this reason that Leonardo’s sketchbooks continue to fascinate us, or why Anaïs Nin’s novels tend to pale in comparison to the unexpurgated diaries they were drawn from.

As for Cordero, he says there’s much more where “Bogus Heritage” came from. Eventually he hopes to publish them, perhaps as a book or as a series of ’zines.

In the meantime, given how urban chaos has provided much of the inspiration for his art so far, how might this change when he moves to the relative peace and quiet of a small town in the shadow of Mt. Maculot where, he says, most of the neighbors are in bed by 7 p.m.?

“I’m actually excited to find out what will happen to my work when I’m closer to nature,” he says.