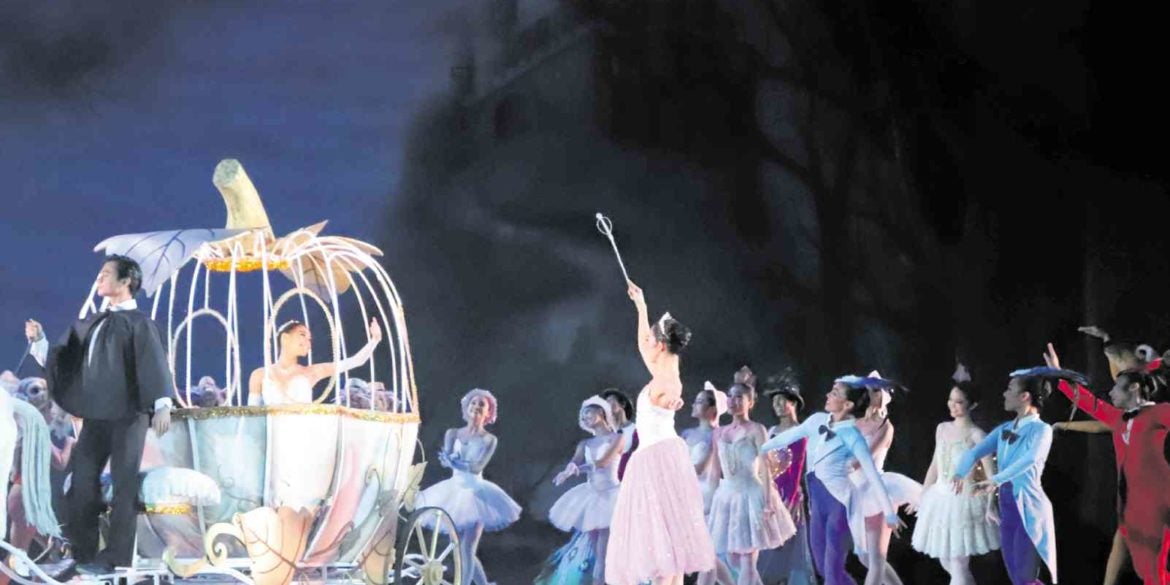 The magical end of Act 1 fulfills Reyes’ intent “to create and present on stage a most magical ballet for the children in my life.”

An entertaining ‘Cinderella’ minus crowd-pleasing tricks

The story has been subjected to scholarly research. But Alice Reyes’ version dumps all this intellectuality and concentrates on giving a young audience a good time

In today’s parlance, the music score of “Cinderella” could be referred to as a “mash-up,” a blending of songs or music, and in this case, Peter Ilych Tchaikovsky’s “top hits,” chronologically curated to drive along the tale of a maltreated, marginalized orphan girl who rises from the chimney cinders to royalty when true love prevails.

In 1981, Ballet Philippines’ artistic director Alice Reyes was compelled to transpose the tale from a mere bedtime story to an exciting and colorful ballet with her own young children in mind. Reyes mined the extensive music library of the late Rudy Vidad, then the ballet company’s resident photographer, which was the constant source for the ballet company’s music selection, and strung together a dozen of Tchaikovsky’s masterpieces to support the ballet libretto she had written.

By the early ’80s, the tale of Cinderella numbered as many as 700 variants worldwide.

Although the attribution to the tale is popularly assigned to the German brothers Jacob and Wilhelm Grimm (1786-1859), “Aschenputtel” (Ash Girl), the tale’s closest plot line as we know it, popularized by Disney, is, in fact, Charles Perrault’s (1628-1703) “Cendrillon,” or “The Little Glass Slipper.”

The Brothers Grimm’s original version written in 1857 takes on a dark note where the story begins at the deathbed of Cinderella’s mother, and momentarily wallows in Cinderella’s grief.

In 1945, Rostislav Zakharov choreographed “Cinderella” for the Bolshoi Ballet, to the score of Sergei Prokofiev. Lush and melodious as it is, the score, however, takes on a hint of darkness on a minor key, akin to the ballroom scene in “Romeo and Juliet,” and the melancholia of the “Giselle” Overture, perhaps inspired by the dark undertone of the Grimms’ original tale.

The story of Cinderella has been subjected to scholarly research and interpretations of its varied plot lines. There have even been attempts to explain meanings and significance, from historical customs to manifestations of the human soul and psyche.

But Reyes’ version dumps all this intellectuality and concentrates on giving a young audience a good time. This is not to say that she succumbs to mediocrity and crowd-pleasing tricks. On the contrary, her characterizations are well- defined and motivated, her choreography technically demanding and exhausting, but put across splendidly by a fine troupe of well-honed, enthusiastic dancers.

If there are two facets that contribute heavily to the ballet’s entertainment value, it would be the extended suite of the animals’ divertissements and the antics of the cruel stepsisters, whose spot numbers oftentimes require an off-balance technique and off-center posture, the opposite demands of ballet prerequisites.

Both the female cast (Denise Parungao and Jemima Reyes) and the male cast (Victor Maguad and Eugene Obille) deliver the desired awkwardness with precision, giving the audience a belly laugh but without giving in to slapstick. The male cast, aside from performing in drag, dance en pointe.

Parungao’s comedic timing is a revelation, and her manner of completely embracing of her character is evident even when she is off the limelight. She, Reyes and Maguad are among the company’s principal dancers in a secondary role, which, in this production, seem to demand more.

The clumsiness of the stepsisters is in contrast to the outward finesse (yet inward cruelty) of the stepmother, alternately danced by Lisa de la Fuente and Novy Berber, as they coyly flirt with the King in Reyes’ version.

Alternately playing the title roles are Monica Gana and Katrene San Miguel. While Gana plays the silently suffering sweet cinder girl, San Miguel displays a hint of aggression despite the bullying, as seen in her manner of attack and phrasing.

These two different takes on the same character are a welcome distinction, displaying a healthy response to the motivation and encouragement generously given by Reyes to the dancers to “own the character” they are playing.

The animals’ divertissement is, hands down, the magical moment for the young audience.

In addition to the usual mice, there is a deer, a bear, squirrels, swans, blue jays, peacocks, a cardinal, an owl, fireflies and butterflies, in exquisite costumes originally designed by the late Salvador Bernal, National Artist for Theater and Design.

Collectively, the ensemble displays precise agility and technique. The bluejays, in particular, danced by the petite pair, Gia Gequinto and Joanne Sartorio, perform the allegro footwork so crisply. The cardinal Stephanie Santiago is strong with graceful, soft arms for wings. And when the colorful, glittering ensemble of creatures wave off Cinderella in her pumpkin coach, Act 1 fulfills Reyes’ intent “to create and present on stage a most magical ballet for the children in my life, Chris, Sara and Marco.” With this latest rerun, the list of charmed children has grown extensively.

By the time Act 2 ends with a breathtaking ensemble court dance, the reality of dance and the energy it demands hits one in the face as Tchaikovsky ascends from allegro moderato (moderately lively) to a rousing allegro molto vivace (very lively).

It’s truly a magical theater experience on all counts, one that makes its impression on all ages.