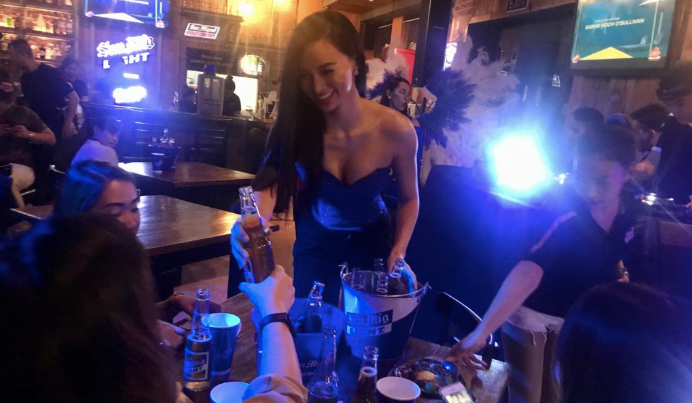 For 20 years, San Mig Light has become a staple of Filipinos’ drinking moments. And, to celebrate this milestone anniversary, the beer corporation prepared a bar-hopping tour for beer lovers. The celebration took place at the following venues including A. Venue, WMJ refreshment, The Cabin Bar Bistro, Alchemy Bistro Bar, The Social, Backwell by BBZ, El Chante, and Puravida, wherein patrons and newbies got treated to a limited-time-only promo.

Miss International 2016 and San Mig Light’s brand ambassador Kylie Verzosa surprised bar-goers as she visited each of the 8 bars and announced San Mig Light’s special treat that night: each table at the bar gets a bucket of San Mig Light for free, and additional bottles ordered within the next 20 minutes costs only P20! The 8 drinking spots that celebrated with San Mig Light were WMJ Refreshment, the Cabin Bistro, Backwell by BBZ, Alchemy Bistro, The Social, Pura Vida, The Apartment, and El Chante.

Verzosa personally handed over the free beer buckets to the tables and enjoyed cold San Mig Light together with the lucky guests.

San Mig Light is the country’s leading light beer with only 100 calories per 330ml serving—giving you a full beer flavor without that heavy feeling. For more updates, follow San Mig Light on Facebook, Instagram, and Twitter. INQUIRER.net BrandRoom/ANA