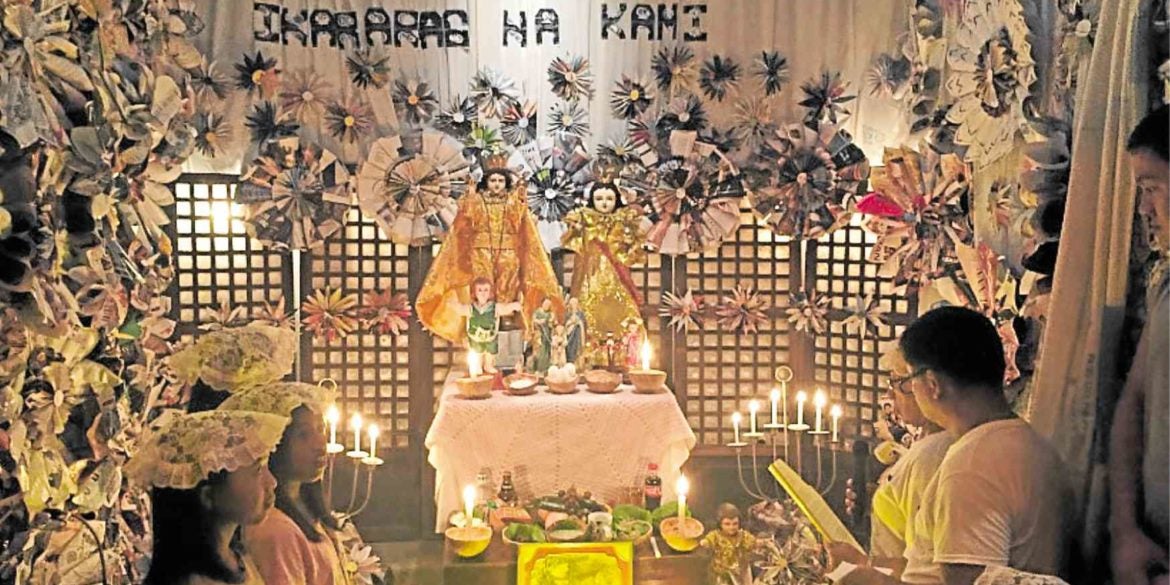 Every year, during the All Saints’ and All Souls’ Days, the people of San Narciso in Zambales mount street corner shrines of light materials to honor their departed loved ones.

The shrines called tumba—the Spanish word for tomb—are fully decorated with flowers, images of saints and other appurtenances where the townspeople gather for prayers.

He said the tradition which was revived in recent years is a social, neighborhood event where people gather to commemorate their dead.

In 1934, Ramos’ uncle Maximo wrote in an issue of the Philippine Magazine describing what was then called tombas.

“The candle-lighted tombas have been erected at a number of street crossings [where] groups of old people go about in the night, praying for the dead of every household,” he notes.

He wrote that inside the tumba are a small paper coffin with a praying angel-shaped paper lantern, ornamental plants and benches where the people “talk in low tones, over basi wine and betel nut, of the good deeds of those who have gone before.”

Aside from the decorations and prayers, another important aspect of the tumba is the atang or offerings which include rice, eggs, alcoholic drinks, fruits, vegetables, rice-based sweets and even cigarettes.

Today, traditional tumbas still exist due to the efforts of the local government in sustaining the tradition through the annual “Tumba-Tumba” competition.

However, some have been converted to present horror and violent scenes which do not sit well with community leaders.

In his Sunday Mass homily following Undas, the town’s parish priest Fr. Roque Villanueva lamented the proliferation of horror houses during the All Saints’ and All Souls’ Days in town and the conversion of a religious practice into horror-themed tumbas with prayers replaced by horrific scenes.

“It is holiness to horribleness,” he said of the shift to the unholy practice.