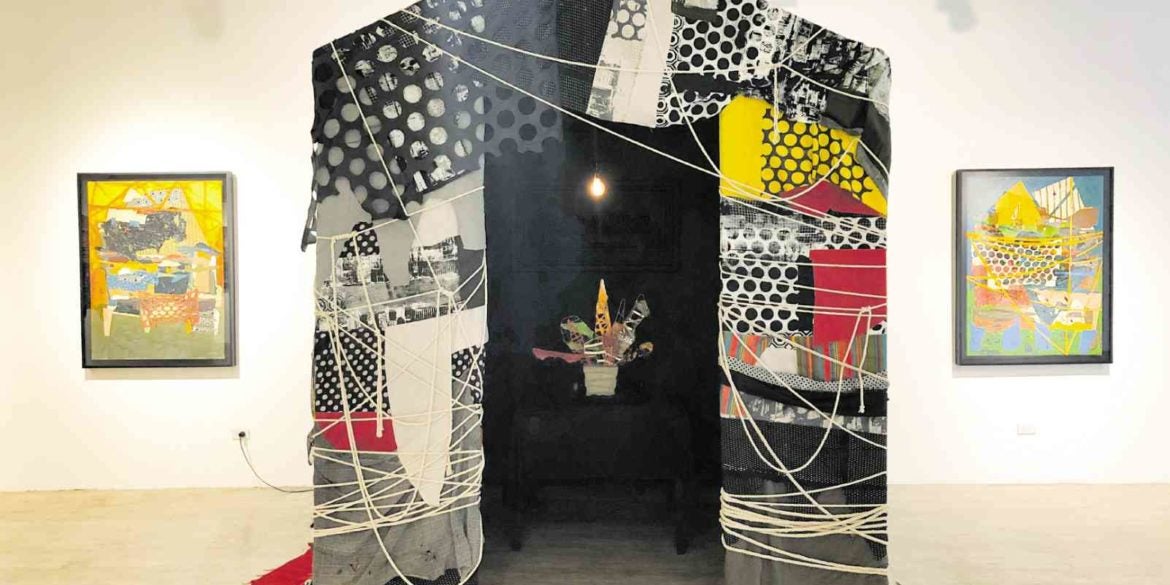 Mix of monochrome gray and vibrant colored fabric drape around the makeshift house. There’s a rope laced loosely on some parts and tight on the others. One can enter this house without a door. Within the dark interior is a dining table with numerous black underwear beneath the colorful “potted plant.” “The Last Supper” hangs on the wall.

This installation is part of Max Balatbat’s new exhibit entitled “Balay.” The Caloocan-born and -raised again manifests his great interest in exploring brothels around his community. With an unflinching eye, he captures the essence of his surroundings and “insists on what many would wish to remain marginal, under-the-radar, unspoken.”

Together with the installation is the “Balay Alay” series, a series of expressionist house paintings. According to Balatbat, the interest came from his architecture background and architect father. Using his familiar thick acrylic textures and colors, he forms collage-like abstraction. But behind these colorful patterns are dark and haunting stories of prostitution. The brothels are narratives themselves.

A house is a “haven against the tempest outside.” But in brothels or whorehouses, the tempest is inside, for there’s subjugation to a cruel and humiliating act, especially to the eyes of many whose source of living could comfortably be found on something else. There’s also a paradox because the house is a place for the sacred, but it is also where the secret and the unspoken happens. A recurring object within the series of these houses is the rope around the house. This is the force through which the artist speaks his commentary.

Prostitution has been the subject of Balatbat’s work since his first solo show titled “Avenida” in 2010. But Balatbat is not only someone peeking from the outside like a voyeur. He knows what happens behind closed doors, and like his installation without a door, he positions himself as an artist ready to expose. He wants the audience to know the secrets (or at least what the society wants to be a secret).

He elaborates on his consistent subject adding a new image into his body of work. Balatbat begins to paint plants, which he calls the “Halaman-Laman” series. As stated in the exhibit notes, “They point to something that is delicate, needs tending and yet asserts a sense of undeniable autonomy. These may be a stand-in for the prostitutes themselves, or at least what they trade.”

These women are not “still-life” to be ignored. They are alive. They need to stay alive. But like a leaf bitten and nibbled by a caterpillar, the leaf gets damaged, and the more the leaf is consumed, the more it loses itself.

The artworks present in the exhibit is a reminder of the the people living inside the (whore)house. Although prostitution is a “transactional gesture,” these brothels will continue to stand unless there’s a greater action beyond art. “The house shelters daydreaming, the house protects the dreamers, the house allows one to dream in peace,” says Gaston Bachelard. But these women can only continue to dream for a home for some time more.