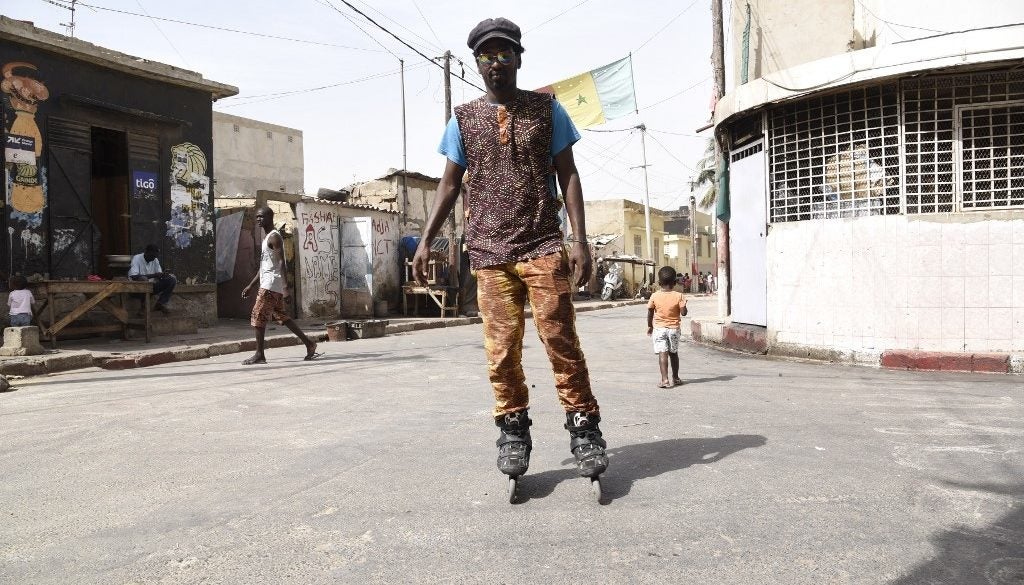 Flitting on rollerblades between colorful murals in this part of the West African metropolis, Diallo, who is also a guide to the area, points to works by artists from all over the world.

He heads an association that aims to use murals to save fading colonial-era buildings from destruction and to make art accessible to all — not just “guys in suits and ties.”

The result is beautiful, if jarring.

Swirling tableaux of geometrical or animal motifs enliven the walls in the otherwise nondescript cityscape.

One mural features a fist raised against a hypnotic-blue background, for example. Underneath it, carpenters work steadily at wood pallets.

Another mural has two mysterious women set against brilliant indigos and azures staring into the distance. A real-life cow rummages on the ground at their feet.

Diallo and some associates started the association Yataal Art — which means “expand art” in the Wolof language — in 2010.

They were initially asking artists to decorate walls.

But now artists are coming to them, says Melodie Petit, the associations’ vice-president.

She adds that artists approach families and ask permission before painting, often offering them dinner in return.

“It’s not a contract with a motorway company or a commercial sign. It’s really a human contact,” Petit said.

The group is also seeking to protect Medina’s old colonial-era buildings from a construction boom that is transforming the face of Dakar.

The neighborhood has its roots in Senegal’s colonial past, when in 1914 French authorities moved black people from central Dakar’s Plateau neighborhood, according to historian Ibrahima Thioub.

Since then, the tight-knit community has nurtured artists across generations and has retained its identity even as new migrants moved in from the countryside.

“While the Plateau was sleeping at night, Medina was waking up,” Thioub said.

World-renowned Senegalese singer Youssou N’Dour is from Medina, for example, and painter Kre M’Baye kept his studio there.

But change is coming to Medina, as rents skyrocket and large retailers set up shop.

Sociologist Djiby Diakhate says residents at one time all knew one another and shared strong values.

“Nostalgic people can’t find their way around now,” he said.

Guide Diallo wants to save the soul of the neighborhood from “certain groups of elitists” who come as developers.

Painting the walls of old colonial buildings is meant to save them. “We started little by little, now there are nearly 90 murals,” Diallo says.

In many settings, murals are likely to cause hostility as well as popularity, but in this case, the majority of local people interviewed by AFP said they liked the art.

Abdoulaye Bop, 34, a postman whose uncle owns an eatery in the neighborhood, said that “everyone here likes the art, even if not everyone understands it”.

Nidiawar Kan, 47, a carpenter who himself lives in an old Medina house, agreed.

“It’s very pretty,” he said. “It’s better than dirty walls. And it brings changes to the neighborhood. We see foreigners taking photos,” he added, speaking in a mixture of French and Wolof.

More and more tourists are visiting now, he says, but their presence is not entirely trusted either.

“We want to keep our originality,” Diallo adds. “We are not on TripAdvisor.” IB/JB