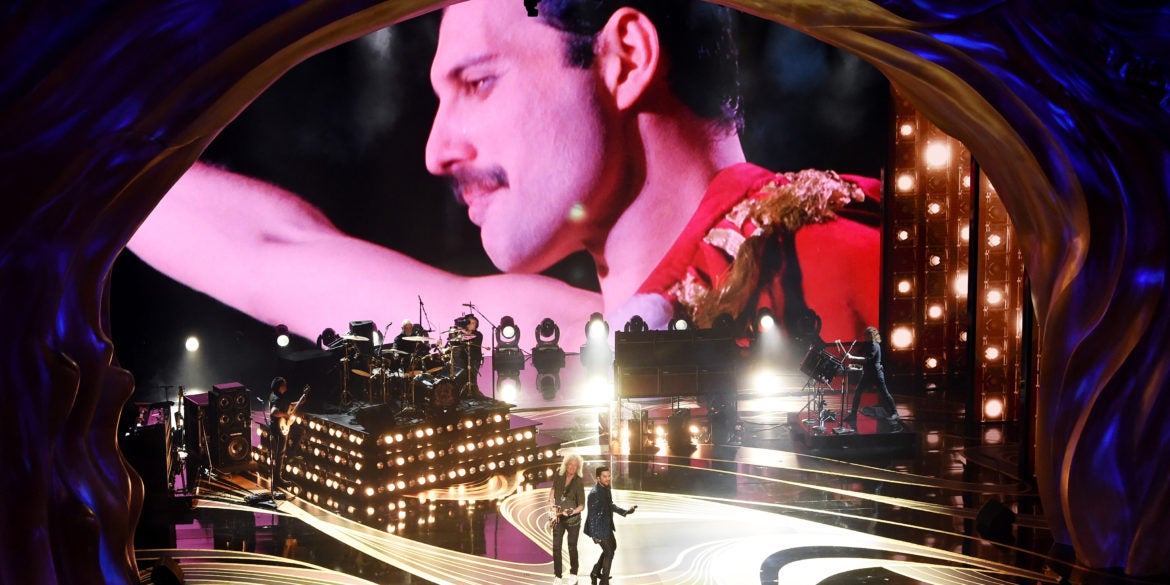 HOLLYWOOD, CALIFORNIA - FEBRUARY 24: An image of the late Freddie Mercury is projected onto a screen while Adam Lambert + Queen perform onstage during the 91st Annual Academy Awards at Dolby Theatre on February 24, 2019 in Hollywood, California. Kevin Winter/Getty Images/AFP

Rockers Queen has become the first band to be celebrated on British coinage, joining Queen Elizabeth II on a new coin unveiled Monday by the Royal Mint.

The iconic British group is hailed on a coin kicking off a Music Legends series being produced by the official mint.

It features Queen Elizabeth on the obverse or “heads” side as usual joined by Queen on the reverse.

The piano features three keys pressed down, representing notes from the melody of their 1975 landmark hit “Bohemian Rhapsody” when Mercury would cross hands to play a G and an F.

“Here we have the first-ever Queen and Queen coin,” said May, 72.

“To have our band recognized and our music celebrated in this way is very touching a real honor.”

Coins are an essential part of the Queen sound: May plays his guitar using old sixpence pieces as a pick.

Taylor, 70, joked that with all the fuss, “I feel entirely spent”.

The coin’s designer Chris Facey said he tried to represent the “musical democracy” within the band, in which all four members wrote classic hits.

“Freddie was flamboyant and his camp theatrics are a big part of Queen, but the band is more than just a frontman,” he said.

“To reflect this sense of balance between them I created a design that featured each of their iconic instruments.

“And by making the instruments the focus, I wanted to convey Queen’s skill as musicians as well as their passion for their craft.”

Taylor inadvertently became the first living person other than royalty to appear in a photograph on a British stamp.

He was in the background on a 1999 stamp featuring the late Mercury, issued as part of a Great Britons series.

Mercury died from AIDS-related pneumonia in 1991. Deacon retired in 1997.

Taylor and May are currently on tour in South Korea and Japan with US vocalist Adam Lambert.