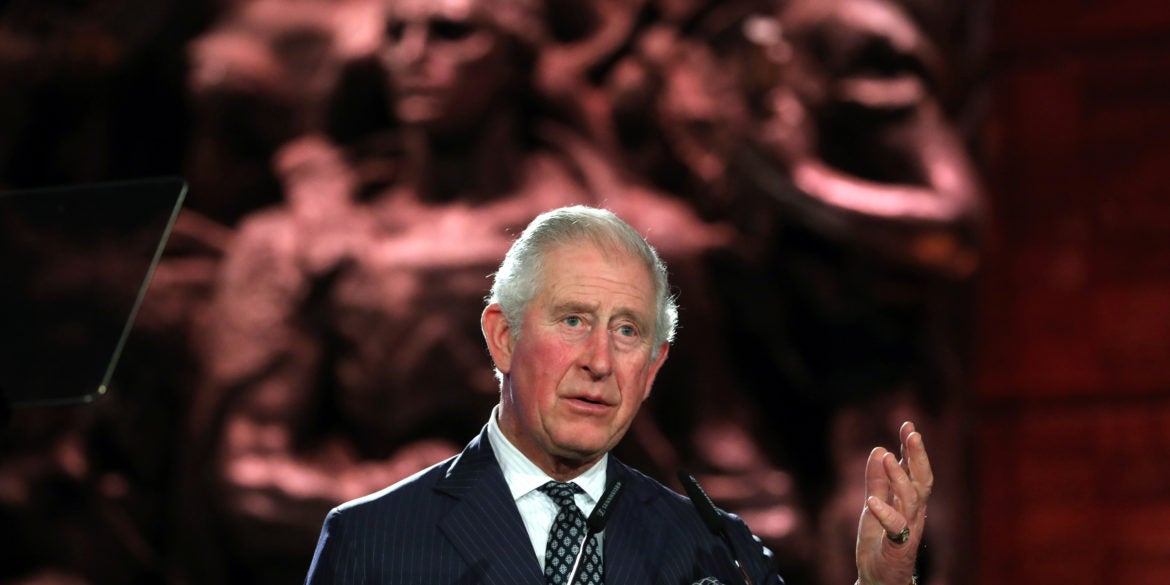 Britain's Prince Charles delivers a speech during the Fifth World Holocaust Forum at the Yad Vashem Holocaust memorial museum in Jerusalem on January 23, 2020. - World leaders travelled to Israel this week to mark 75 years since the Red Army liberated Auschwitz, the extermination camp where the Nazis killed over a million Jews. (Photo by Abir SULTAN / POOL / AFP)

‘What use is wealth if it burns?’ Britain’s Prince Charles sounds climate alarm

Britain’s Prince Charles on Wednesday told business leaders at the Davos economic forum that wealth was of no use if it doesn’t help tackle climate change, as he met Swedish teen activist Greta Thunberg and warned over the perils of global warming and environmental damage.

Charles, the eldest son of the Queen and heir to the throne, met Thunberg in Davos on the same day as President Donald Trump left the Swiss resort expressing regret he had not seen the environmental campaigner.

Charles, a long-time advocate of environmental causes, launched at Davos a new Sustainable Markets Initiative aimed at encouraging the private sector to move towards green ways to promote growth.

“What good is all the extra wealth in the world gained from business as usual if you can do nothing with it, except watch it burn in catastrophic conditions?” asked Charles in a speech to the forum.

“This is why I need your help, your ingenuity and your practical skills to ensure that the private sector leads ourselves out of the approaching catastrophe into which we have engineered ourselves,” he said.

“We simply cannot waste any more time. The only limit is our willingness to act and the time to act is now,” he added.

‘Would have loved to’

Charles then held a private meeting with Thunberg, who the previous day told Davos “our house is still burning” and slammed governments for doing “basically nothing” on climate change.

Trump said on Wednesday he would “have loved” to have met Thunberg at Davos but added that she should not focus her anger on the United States.

He claimed that countries other than the United States were the worst polluters and “Greta ought to focus on those places”.

Trump had launched an extraordinary attack on environmental campaigners in a speech to the World Economic Forum (WEF) on Tuesday, saying they were “perennial prophets of doom” and the “heirs of yesterday’s foolish fortune tellers”.

The president on Wednesday denied he thought that global warming was a hoax, saying: “No not at all — I think aspects of it are.”

Charles, who prides himself on having warned of the perils of climate change before most political leaders, was asked by reporters in the corridors of Davos if he felt in any way targeted by Trump’s “prophets of doom” comments.

Charles made no reference in his speech to the turbulence in Britain’s Royal Family that has seen an agreement for his younger son Harry to halt royal duties and leave for Canada with his wife Meghan.

But he said he particularly wanted to “extol” the Earthshot Prize announced by  his elder son Prince William to encourage the world’s greatest problem-solvers to find answers to the biggest environmental problems.