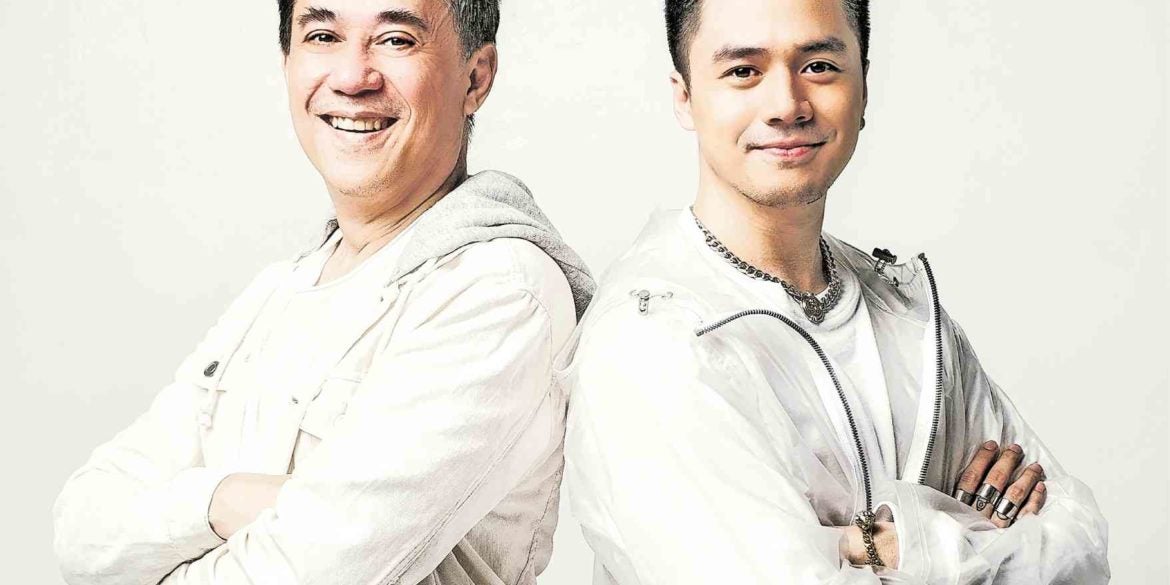 Audie Gemora (left) and Sam Concepcion play the biblical roles of Jacob the patriarch and Joseph the Dreamer, respectively.

‘Joseph the Dreamer’ for millennials

The women, who were just in the background in the original version, will have a voice and influence. Pressing issues such as family dysfunction and parental neglect will be touched on, and no longer glossed over. Racial and other kinds of stereotyping, formerly done for comic effect, will be cut out.

But the message of hope and God’s undying love amid adversity will resonate in the musical that is being given a makeover.

That is how the professional Christian theater company Trumpets will present “Joseph the Dreamer” for the millennials. The hit musical had its last major staging in Manila in 1999.

Trumpets artistic director Audie Gemora explains the reasons for the musical’s revival and reinvention after 20 long years. “The world still needs to know more about God more than ever. We have to pave the way for the next generation to do what we were called to do. Why are we looking to young people? They are the ones we have to reach out to. The play has to be in their language and point of view. If we do ‘Joseph the Dreamer’ the way we did it in the 1980s, they will find it preachy and unbelievable.”

“Joseph the Dreamer,” a musical retelling of the biblical story of the rise to power of a talented boy betrayed by his envious brothers, was instrumental in the formation of Trumpets in the early ’90s.

The original version, written and directed by Freddie Santos, was staged for just four performances in Cebu in 1989.

It started when a Cebuana resident asked Santos to do a song-and-dance version of the short Christian cantata, “The Dreamer (or What Really Happened to Joseph,)” written by an American named Cam Floria.

Santos threaded the dozen songs into a workable story line, added dialogue, fleshed characterization, and filled in the roles with his friends and colleagues from the theater and concert scenes, casting Gemora in the title role.

Aside from their love of the performing arts, many of them, like Santos, had undergone spiritual revival to become Bible-based Christians.

The fire to share the faith lit their passion for the fledgling musical, and helped win the audience over.

After the Cebu shows came a major Manila run at the Meralco Theater, various performances in many auditoriums all over the country for 10 years, and a second revamp with Gary Valenciano alternating as Joseph in 1999.

Sporadic performances in colleges and coliseums followed the next year.

A younger generation is handling the reins of “Joseph the Dreamer” 2020. Valenciano’s son, musician and concert director Paolo Valenciano, is the musical’s director. Theater actor and pop singer Sam Concepcion is playing the visionary-turned-Egyptian-prime-minister.

Musical director Myke Salomon, who has won rave reviews for “Rak of Aegis” and “Ang Huling El Bimbo,” among others, adds complexity into the praise-and-worship songs.

Mike Arda of the hip-hop group A-Team handles choreography. (There will be a lot of dancing.)

This new creative team retained the original story and material, with theater stalwarts Luna Griño-Inocian and Jaime del Mundo working on the script.

About 95 percent of the original staging, however, will change, says Gemora.

Paolo Valenciano confirms. “Everything is connected—there were no loose ends. There were story beats that happened in the Bible that needed a little more explanation. I wanted to veer away from the campy, light treatment of the story. We made some of its parts a little more serious.”

Floria’s cantata was written for believers who were prepared to worship in a church setting. Valenciano and the team infused purpose into his songs.

For example, instead of a nonreligious female warden singing an inspirational ditty, it’s Joseph’s own mother Rachel (Bituin Escalante) who does the honors (“He Opens a Window”).

The opening chorus, which introduces Joseph’s family (“Praise His Name and See It Happen”), is reconfigured to show the young man’s powers of vision and the reason for his brothers’ hatred, laying the seeds for the clan tension.

Jacob, the patriarch himself, doesn’t get a pass here. While the original interpreted his favoritism as bumbling ineptitude, this new one calls him out and makes him accountable for the division in his own family.

Valenciano says, “The creative team and I understood that we are communicating with a much more sensitive generation. People today are smarter, more aware and they know about the issues going on around them.”

To Gemora, letting the new generation of theater artists connect to today’s audience, their peers, is also a matter of legacy. The artistic director, returning to Trumpets after years in hiatus, plays Jacob, which Santos originally essayed.

Gemora identifies the most fulfilling part about appearing in this musical: “People would come up to me and say that their lives had been changed. Wives who were about to leave their husbands didn’t. Many people met the Lord because they watched this show. That is where we in Trumpets find our measure.”

Valenciano puts it another way: “We want people to leave the theater with life lessons that they can apply, so that they can get over what they’re facing right away.”