Asa Butterfield, Ncuti Gatwa and Emma Mackey are back for another dose of ‘Sex Education’ | Inquirer Lifestyle ❮ ❯ 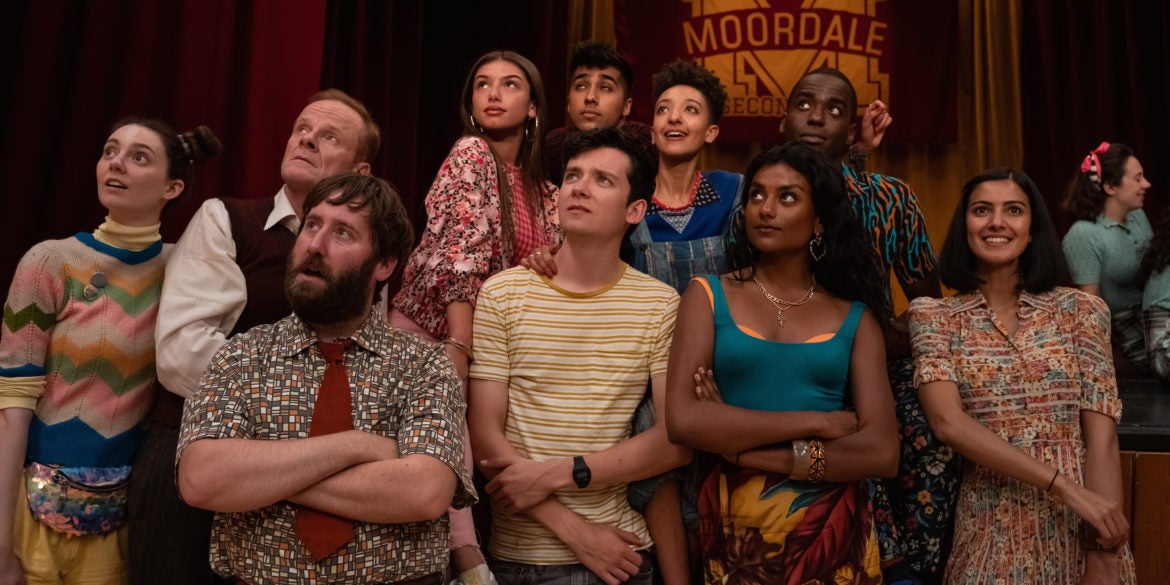 Season 2 takes us back to Moordale

Asa Butterfield, Ncuti Gatwa and Emma Mackey are back for another dose of ‘Sex Education’

You have the greatest laugh in all of Netflix,” we told Ncuti Gatwa, who stars as the vibrant and loud Eric Effiong in “Sex Education.”

He responded just as we hoped—with that big beautiful laugh of his. “Thank you very much. Yeah, people seem to be a fan of my laugh which is lovely, you know. I’m gonna continue laughing,” he said, making costars Asa Butterfield and Emma Mackey laugh as well.

It’s the day before the second season of their show was to start streaming and we were speaking to the three, who were in London, via Google Hangouts.

Asa, who stars as the inexperienced and charmingly awkward Otis Milburn, said, “I’m very, very excited. This time last year we were all in New York so it was a different sort of anticipation. But being at home has made it particularly special. A lot of my friends are talking about it and messaging me and it feels very real.”

“Sex Education” has never shied away from sex—it is, after all, in the title—and Asa’s character kicks season two off in an explosive way: with an intense series of self-pleasuring scenes. We asked him if shooting moments like these is no longer awkward for him as the series has progressed.

“I’d say it’s definitely gotten easier… I worked with Ben (Taylor, director and executive producer) and he assured me about the whole montage and he told me it would be beautiful. I trust Ben so I did it. With this sort of show, you kind of just do, you put yourself out there, let go of your inhibitions and have a wank, sometimes,” he said, laughing.

But there is so much more to “Sex Education” than sex. It’s about family, friendship (we are obsessed with Otis and Eric as besties), love, growing up, and the ensemble cast (which includes Gillian Anderson as Otis’ mom Jean) does a fantastic job at getting their viewers to feel all kinds of emotions. Watching the show, you’ll laugh, you’ll cry, you’ll cringe.

The first season’s plot revolved around the underground sex therapy clinic Otis and Maeve Wiley (played by Emma) set up in school but season two delves deeper into the lives of the people of Moordale—both the kids and the grownups.

One of our favorite episodes features an all-female homage to John Hughes’ The Breakfast Club (Ben Taylor is a huge Hughes fan). It’s no wonder the show appeals to both teenagers and older audiences. “It’s been a really lovely surprise how inter-generational this show has become, and how it helps people escape and people find warmth in this little bubble that we’ve created in Moordale,” said Emma.

Maeve goes through a physical change this season among other things. Were you ready to say goodbye to Maeve’s pink hair?

Emma Mackey (EM): Yeah, I was so ready. I couldn’t wait. I loved the pink hair but it made sense in terms of the story… I think she’s trying to figure out who she wants to be so the color change makes perfect sense. Also, you know, it’s just healthier for my hair.

How has the show changed your lives?

Ncuti Gatwa (NG): It’s definitely changed our lives in terms of the way our careers have gone… The show has been such a blessing. And it’s been amazing to go into this new chapter with a show that is so empowering and of its time as well and of its generation and of this new movement of representation and diversity. But yeah, going incognito in Tesco is a little bit trickier now. But you know, life is good.

What’s the best thing somebody has said to you about “Sex Education”?‍‍

‍‍Ncuti, you told us that you had to warn your parents about the banana scene in the first season. How have they reacted to the show?

NG: They were really supportive and really excited about it coming out. They had nothing but supportive things to say. I mean obviously they didn’t go into too much detail (laughs) about what they enjoyed about the show. I think they were just excited to see me on Netflix.

What’s been your favorite fan interaction?

Asa Butterfield (AB): The premiere was actually quite nice. With season one, it had just come out so no one knew what the show was… But then for season two, we had a huge crowd of people who were so excited for the show and just really wanted to be there and share their support and thank us… Everyone, whether online or in person, just seems to be excited about it and really want to find out what happened, which is what you want.

Can you tease where season two will take your characters?

Asa: Otis has a girlfriend now, that’s the biggest change from season one and he’s learning about what that brings… Obviously him and Eric are good as ever. They’re more popular this time around… they’ve both got a few more eyes on them. Otis is obviously the so-called Sex Kid, and Eric, he’s got a bit more on his plate as well this year.

Has your character rubbed off on you in any way?

EM: I’ve got some Doc Martens now, I never used to have them. So now I wear those every day. Also I say “d*ckhead” a lot more to people. I’m joking. But yeah. I think it’s inevitable. You take on certain traits of your characters because you put quite a bit of yourself in the character. A lot of my idiosyncrasies and little mannerisms that I have now belong to Maeve and vice versa. You have an effect on your character and your character has an effect on you.

Do you still have your Maeve playlist?

EM: Yeah yeah yeah, I still listen to it all the time. It’s still growing.

What about you, Ncuti, has Eric rubbed off on you in any way?

NG: Not really. I mean I guess we’re both loud. Like the volume of which my voice can get to… Like Emma says, I think you’ve always got a little bit of yourself in each character. A bit of you exists in them and a bit of them exists in you. That’s just the life of an actor.

What about you Asa? I feel like you don’t have Otis’ awkwardness.

AB: Yeah, we’re different in some way, I would say I am more confident and probably a bit more outgoing than Otis. But there’s definitely elements of myself in there. Leading up to season one, I was thinking about what those were, what our similarities were and what I could bring to it… things that keeps him busy, what keeps him entertained, his hobbies, and then that sort of awkwardness comes quite naturally to me. There’s elements of me that are in that part and parts of him that feel very familiar.

If you were forced to steal a character from any of your co-stars, which character would you want to play?

EM: (Laughing) Love that, love that.

What about you, Asa?

AB: (laughs) Ooh. I think I’d have a lot of fun playing Lily.