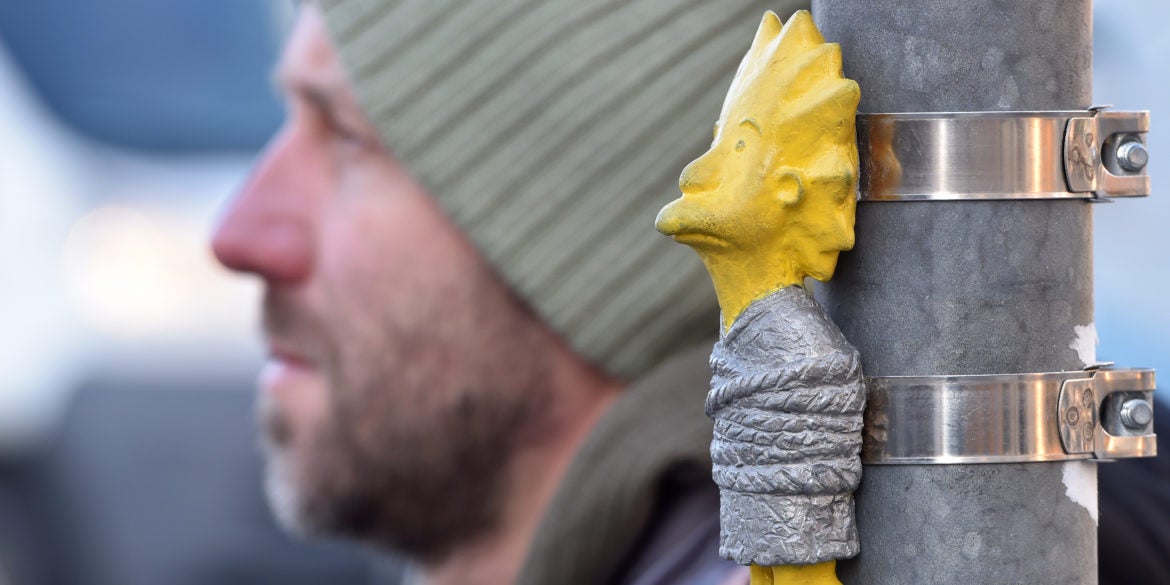 Ukrainian-Hungarian parents' child, sculptor Mihajlo (Mihaly) Kolodko poses next to his small-size, 15 centimeter tall sculpture 'Lisa', a character of the American cartoon 'The Simpsons', in Budapest, Hungary on December 11, 2019. - Drawing inspiration from enigmatic British artist Banksy, a sculptor of tiny bronze statues has gained a cult following in the Hungarian capital Budapest by placing his quirky works randomly around the city for the public to discover. (Photo by Attila KISBENEDEK / AFP)

Drawing inspiration from enigmatic British artist Banksy, a sculptor of tiny bronze statues has gained a cult following in the Hungarian capital Budapest by placing his quirky works around the city for the public to discover.

“I look for places which are a little hidden but still easy to find if you know where to look,” Mihaly Kolodko, 41, told AFP in his workshop in Vac, north of Budapest.

“I never tell anyone in advance where I have put them,” he grinned while working on a new figure, bearded beneath a beanie-hat.

While his statues don’t have the biting satire of Banksy’s work, they have been provoking some heated debate — as well as nostalgia.

Kolodko, whose grandmother was Hungarian, grew up in western Ukraine where he could watch TV from nearby Hungary. Many of his works depict 1970s and 1980s Hungarian cartoon figures.

Since moving to Hungary in 2016 he has peppered Budapest with over 20 cast metal sculptures measuring just 10-15 centimetres (4-6 inches) tall.

A cheeky talking worm is sat on a rampart on the river Danube opposite the Hungarian parliament. A flying rabbit with oversized chequered ears looks down on the city from a perch near Buda castle.

More cryptic pieces include a Marcel Duchamps-style pissoir, and a mysteriously murdered squirrel.

Kolodko doesn’t ask for permission from the authorities to install his metal miniatures, fuelling his reputation as a “guerilla” sculptor, a tag he shrugs off.

“I just follow my feelings, I’m not a lawyer, if I had to spend time and money asking for permits I’d lose the urge to make art,” he told AFP.

“I communicate with people through statues, it’s my first language.”

Thousands of Kolodko devotees are running a Facebook fan page, swapping tips on hunting the statues and debating the meaning of the more abstract works.

“These are the statues of our 30 to 40-something generation,” says 40-year-old Szilvia Liptai, who organises regular “Kolodko tours” for runners, which take in a dozen of the bronzes.

“He triggers our childhood memories,” she told AFP, as runners took selfies beside the talking worm — now sporting a winter scarf and bobble hat knitted for him by an anonymous donor.

Kolodko was trained in monumental sculpture in the Ukrainian city of Lviv by teachers who designed gargantuan statues of Lenin during Ukraine’s Soviet period — and nationalist heroes after the country gained independence.

But he found his artistic voice in less time-consuming and cheaper, smaller-scale works, sculpting the mini-statues in his hometown of Uzhhorod near the Hungarian border.

It was Hungary where the father-of-two’s work found the best reception, winning commissions like one from Budapest airport for a diminutive Franz Liszt or memorials for historical events such as the Holocaust.

Thrown into the Danube

“Banksy inspired me to use the language of sculpture the way he does for painting,” Kolodko said, beside a statue of US cartoon character Lisa Simpson bound to a lamppost in downtown Budapest — a “Joan of Arc” commentary on the “oppression of American culture”.

Not everyone gets his messages though.

A statue of another 1970s children’s favourite, a hapless handyman goat, was widely seen as a critique of shoddy workmanship on a recently renovated main square in Budapest.

“I meant to show that you can be lovable even if things don’t work out, and also reflect on the Ukrainian guest workers who used to gather here in mornings for odd-jobs,” he said.

Then last November an ultra-nationalist politician interpreted Kolodko’s statue of a Russian “ushanka” fur ear-flap cap with a red star on it as approval of a nearby Soviet World War II memorial.

After filming himself cleaving it from its place with an axe, the politician said it was “the symbol of a dictatorial system” and threw it into the Danube.

“I don’t mean to be provocative,” Kolodko told AFP. “The ushanka was actually trying to say the past is still with us.

“Some people just look at things differently. After the statues go public they take on a life of their own, I say goodbye to them.”

Three of his pieces have been removed or stolen so far, he added.

Earlier this month, the latest “Kolodko” suddenly appeared, the artist’s answer to the recent act of violence: a tiny bronze axe where the ushanka once rested.