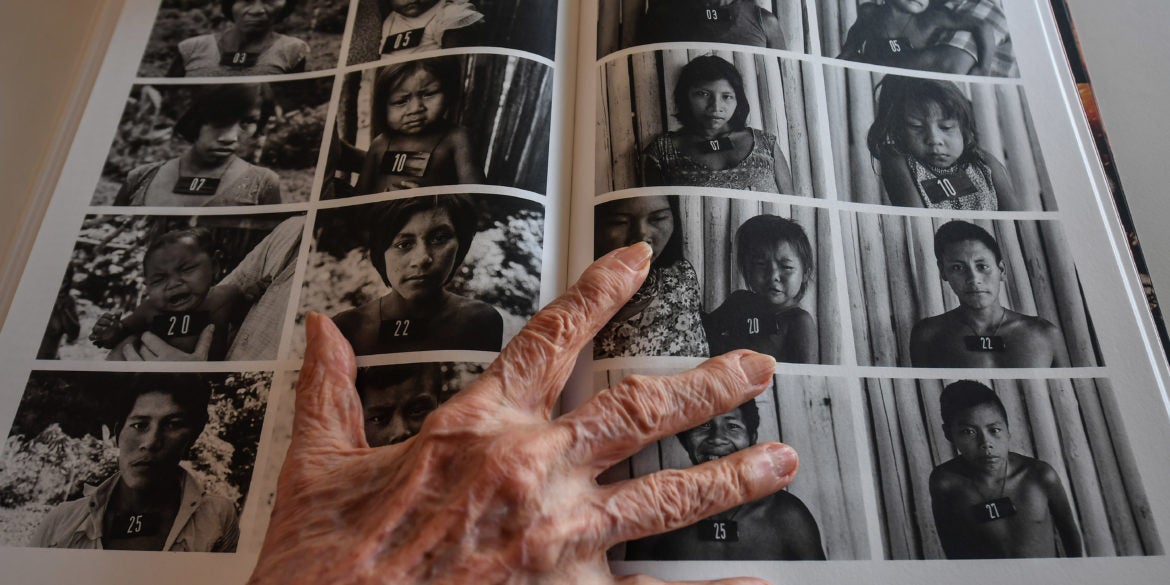 Swiss-born Brazilian photographer Claudia Andujar keeps a book open on a page with portraits of indigenous people during an interview with AFP in Sao Paulo, Brazil, on October 29, 2019. - A major retrospective of the work of Andujar, who has spent five decades fighting to protect the rights of Brazil's Yanomami tribe, will open in Paris on January 30, 2020. She hopes the exhibition will call attention to the renewed threats the Yanomami face under President Jair Bolsonaro, who wants to open up more of the Amazon to mining and farming. (Photo by Nelson ALMEIDA / AFP)

Swiss-born photographer Claudia Andujar has spent five decades fighting to protect the rights of Brazil’s Yanomami tribe. But the feisty octogenarian says her battle is not over.

Andujar began documenting the Yanomami in 1971 after visiting members of the group deep inside the Amazon rainforest in the northwestern state of Roraima, near the Venezuelan border.

She hopes a major retrospective of her work opening in Paris on January 30 will call attention to the renewed threats they face under President Jair Bolsonaro, who is pushing to legalize mining and farming in protected native territory.

“The Yanomami are my relatives, they are part of my family and I want to defend my family,” Andujar, 88, tells AFP at her Sao Paulo apartment.

Spending weeks at a time with the Yanomami, whose territory in Brazil covers some 37,000 square miles — an area bigger than Portugal — Andujar battled stifling heat and malaria to capture fragments of their daily life, such as hunting trips or shamanistic rituals.

“I tried to follow their way of living…I just tried to make them understand that I’m looking for friendship,” Andujar says of her first few weeks with the tribe.

“They had never been photographed so they didn’t understand what I was doing and I didn’t want to invade them.”

By experimenting with infrared film, flashes and even vaseline smeared on the camera lens, Andujar created distorted images that offer an interpretation of the Yanomami’s complex spiritual world.

“She tried to convey and to represent things that were invisible to Western eyes,” says Thyago Nogueira from the Moreira Salles Institute in Brazil and curator of the exhibition for the Fondation Cartier pour l’art contemporain in the French capital.

A smaller version was on display for much of 2019 in Sao Paulo and then Rio de Janeiro, catching the eye of the Fondation Cartier.

“She was not just a journalist trying to narrate a story or an anthropologist documenting a society,” Nogueira tells AFP.

“She completely immersed herself in the subject and she felt free to experiment.”

The exhibition charts Andujar’s transition from photographer to activist as the Yanomami — whose population in Brazil is around 26,000 — faced increasing threats to their survival. Some 11,000 Yanomami live in Venezuela.

Brazil’s military rulers began constructing highways across the Amazon in the 1970s to open up the rainforest to development.

The Yanomami and other tribes were devastated by diseases introduced by non-indigenous Brazilians settling in the remote region.

They also confronted deadly invasions by gold miners seeking to exploit reserves of the precious metal on their land.

Andujar was expelled from the region in 1977 after becoming a thorn in the side of authorities.

She then joined Yanomami shaman and spokesman Davi Kopenawa in a campaign for the legal demarcation of the tribe’s territory, which was granted in 1992.

Using her camera as a political weapon, Andujar “avoided a genocide,” says Nogueira.

But the hard-won rights remain under threat, says Andujar.

“The government, if they decide they want to go and extract gold or other minerals, they will go and try to do it,” she says.

These fears have intensified under Bolsonaro, who took power in January 2019 promising to open up more of the mineral-rich Amazon to development.

He also has dismantled environmental protections that activists say have made tribes increasingly vulnerable to invasions by illegal miners and loggers.

His government is expected to send a bill to Congress soon that would legalize mining on indigenous land.

In recent months, three indigenous people have been killed in two separate incidents in the northeastern state of Maranhao.

One of them died after being ambushed by loggers. The others were killed in a drive-by shooting.

“Bolsonaro has no experience at all with indigenous people,” Andujar says derisively.

“I always worry about their future.”

After fleeing Europe during World War II, Andujar lived in New York before joining her Swiss mother in Brazil in 1955.

The loss of her Hungarian Jewish father and his relatives in Nazi death camps in Germany and Poland has fuelled Andujar’s determination to protect the Yanomami.

“It’s something that in the Second World War I was not able to do,” Andujar explains.

Even now, as she struggles to walk and spends much of her time at home, Andujar continues to devote herself to their survival.

She last visited the Yanomami two years ago and does not know if she will return.

“I’m getting older,” she says chuckling.

Andujar plans to attend the opening of her exhibition in Paris where she hopes to meet with political leaders, including French President

Emmanuel Macron, and raise her concerns.

“These people have the right to live,” she says of the Yanomami.

“They have to decide what they want and not the government.”

Cover image: Swiss-born Brazilian photographer Claudia Andujar keeps a book open on a page with portraits of indigenous people during an interview with AFP in Sao Paulo, Brazil, on October 29, 2019. (Photo by Nelson ALMEIDA / AFP)